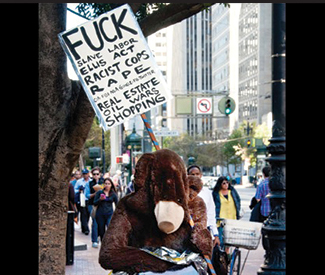 DANCE Whatever else Keith Hennessy’s homespun ritual Bear/Skin offered its audience last Wednesday night at the Joe Goode Annex, it brought the rain. One night’s worth fell on the thirsty ground and into a record-making drought, displaying itself marvelously on the clothes and flattened hair of the last audience members to wander in as Hennessy walked about the postindustrial performance space in fuchsia track shorts prepping the show, his first solo since 2008’s Bessie-winning Crotch.

A white teddy bear recognized from that earlier solo sat propped against a far wall of the stage area, beside a white rabbit, though from some angles you’d miss them both thanks to one of two large silvery obelisks that stood nearby — both composed of Mylar sheets hoisted maybe 10 and 14 feet high on wire rigging. More of the material was stuffed into an oversized Mission Street market bag, among other colorful piles and pools of materials around the floor of the white utilitarian box theater, much of it referenced in the single-page program: “Floral tights, inheritance from Remy Charlip; plaid blanket skirt, inheritance from my family; pompom tail, Lisu people in northern Thailand; embroidered neck piece, fabric market in Dakar, Senegal; credit cards, personal collection.”

Personal objects and personal history would soon reverberate with a collective consciousness, a political and animal consciousness, in a sacramental performance that, among other things, seemed to limn the potential for an alternative destiny on an ever more blighted planet. (In an alternately hushed and rustling moment later that night, those extra space blankets covered the audience, almost as if to shield it for a moment, not from space rays, but from all the noxious energy beamed from every orifice of a loud, lurid, snooping, thieving hydra that is entirely local.)

The first incarnation of Bear/Skin was in spring 2013 at Subterranean Art House in Berkeley, during an edition of the roving monthly performance series of East-Bay collective SALTA. It was the centenary of Stravinsky’s The Rite of Spring, an avant-garde assault on convention that became a modernist classic. Hennessy both addressed it and appropriated a key part of it, not reverently but critically and creatively. His partly impromptu and wholly brilliant 40-minute performance was built around a comical bear suit, a feed-backing microphone, intimate direct address, a discussion of three “suicide economies,” and his re-creation of the last section of Vaslav Nijinsky’s choreography in that seminal ballet — a series of dozens of jagged leaps that Hennessy’s middle-aged body essayed with remarkable, heaving determination, doubling the ballet’s sacrificial climax with one of his own.

These elements are all retained in the latest iteration, though amid further elaboration, not all of which works equally well. The aforementioned moment with the audience under Mylar blankets acts as a bridge between two rough halves, as Hennessy, donning the personal articles and totems listed in the program, reemerges as a glittery thrift-store shaman amid a Hardkiss track and a scattering of patterned laser light. The piece builds intelligently, shrewdly toward this new climax, with a kind of honesty few artists can manage so well. But it both broadens and dilutes those original components in a progression of movements that feels more rigid, less fluid, while not necessarily adding depth to the themes or experience.

At the same time, Bear/Skin will continue to evolve. It’s slated for more San Francisco and East Bay showings in January, right after it returns from New York, where young but astute maven of contemporary dance-performance Ben Pryor has slotted it into 2015’s American Realness festival. It is a must-see.

Moreover, some of the newer elements are commanding — especially an original poem near the beginning, an inspired response to epidemic police violence. Hennessy speaks with pounding legs and trembling form, in a furious rapid-fire monotone that evokes the banal bullets of Hollywood’s white male machine-gun entertainment. If that sounds didactic, it is and it isn’t — which is to say, it is only in the best sense of a clear, precise blow. Hennessy is not just an inimitable but also a highly skilled performer, and the intersection of his political awareness and his performance “realness” is a purposefully relaxed, open and porous zone in which a genuine sense of moment rises gently but surely, like some measure of the miraculous or of simple joy, some small grace; a little rain maybe for a world on fire. *