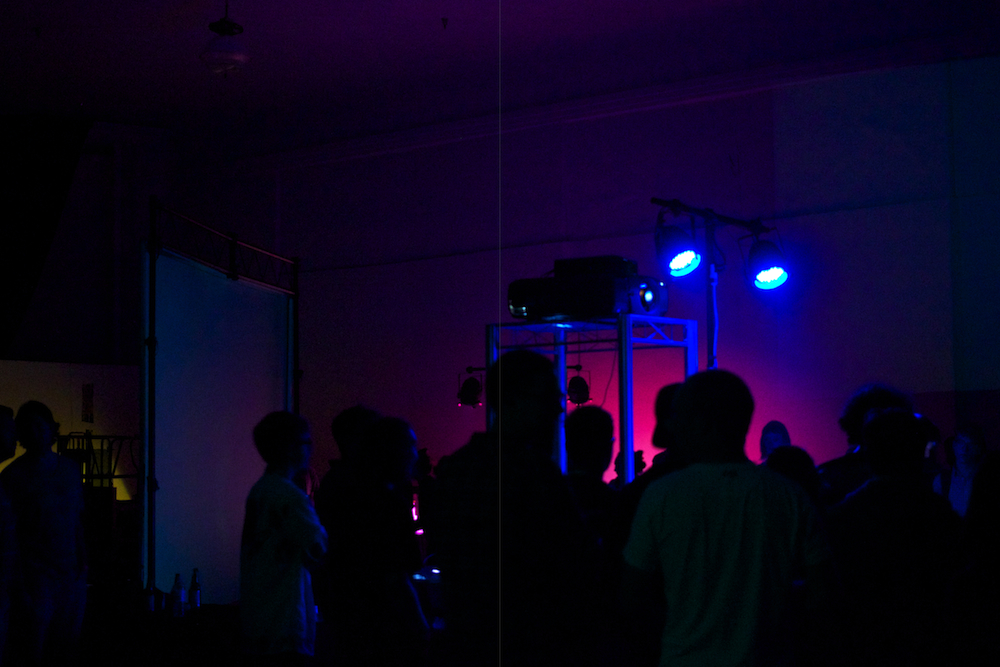 Gray Area Arts & Technology is a newish venue, admittedly a work in progress, with construction and renovation continuing when the doors are closed, but they are already booking unique electronica acts. My first visit was, as it happens, the first time Tim Hecker played a show in San Francisco (late July; great waves of processed sounds), and my second, Tuesday night (Sept. 23), was one of the five stops on Arca’s current DJ tour along the West Coast.

Arca is probably most famous for being hired by Kanye to tweak tracks on Yeezus, though another of his collaborators, FKA Twigs, is gaining ground in the weirdo electronica game. The Venezuelan-born DJ artist will release his first full-length record, Xen, in November, and the lead single has been streaming for some time. His brand of music is harsh yet spacey, chugging bass syncopated against stabs of high end melodies, a math-y brew of garage and trance with some dubstep for good measure.

On this small tour, he’s playing four CDJs with a fellow collagist, Total Freedom, while Jesse Kanda projects all manner of videos (some YouTube sensations, some original animations, some outre body images, all inflected, at least in my brain, by the word “trauma,” which was the title of a joint piece he and Arca performed at MOMA PS1 in 2013). At Gray Area, the visuals were projected on three walls and one screen in the middle of the room. A lot of the early visuals played campy against the “ironic” remixes, and “arty” noise, but the interest in bodies was striking because every single body was “wrong” in some way.

I spent a lot of the show curious what this “confrontational” bent was for, and it made me feel old (gasp!), but the beat scene has always been about manipulation, so it makes sense that, if somebody wants to warp sounds they would want to twist and turn our physical matter in tandem. This doesn’t mean the music is necessarily heady, in fact most of the crowd was dancing pretty hard, but there is an “art school” bent to the onslaught of irreality.

What made it doubly difficult for me, however, was the interruption of a neighbor’s complaint that made the music cut out for a spell, and drained the room of the energy that had been building. I want to blame the night of the week (Tuesday) as much as improper sound proofing, but the fact of the matter is: the house was on fire with bass and sinewave screams and if you’re not ready to party that way, no matter who or how old you are, I’m gonna bet you’d rather that snap-cackle-trap shut the hell up.