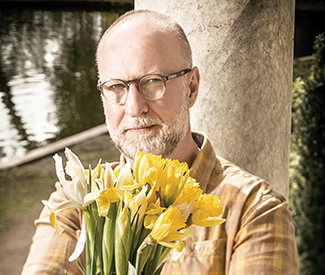 LEFT OF THE DIAL Bob Mould seems like a good multi-tasker. The legendary singer-guitarist is just signing out of a Reddit “Ask Me Anything” session as he answers the phone in New York for our interview Sept. 9; he’ll play at the Bowery Ballroom the following night.

“Sorry, we went a little over because there were technical difficulties at the beginning,” he says, when I explain that I’ve been watching for the last hour in real time as his superfans — as well as guitar nerds of all stripes, from all over the world — ask him questions.

These queries range in topic from pleas for his explosively influential punk band Hüsker Dü to get back together (“Some things can’t be replicated, and those eight years are best left untarnished”) to interest in his diet and exercise regimens (little to no starches, lots of running staircases when he’s home in SF), wrestling opinions (Mould at one point wrote music for the professional wrestling industry) to “what positions were your guitar pedal knobs at when I saw you play this one particular show?” (generally, 3pm for both).

If the fans seem all over the place, it’s for good reason: Mould’s career is as varied as the people who count him among their heroes. After fronting Hüsker Dü in the early ’80s; he ushered in a higher standard for hard-hitting alt-rock in the ’90s with a new band, Sugar. His solo career has taken him into melancholy singer-songwriter territory, then back to all-consuming wall-of-deafening-sound guitar rock, with forays into the aforementioned wrestling business. In 2011, after decades of being known for his intense love of privacy, he penned an acclaimed memoir about his life thus far, including his tortured early years spent closeted, at times using meth and cocaine to cope.

After that 180, it should come as no surprise to anyone that Mould’s most recent work, Beauty and Ruin (which came out June 3 on Merge), grapples with highly personal territory.

In the first half of 2012, Mould was riding high off the book’s success. He’d just been honored by dozens of younger rock titans who consider him a god — Dave Grohl, Spoon, Ryan Adams — at a tribute performance in LA. He had a new record out, the critically acclaimed, harder-than-he’d-rocked-in-a-while Silver Age, and was celebrating the 20th anniversary of Sugar’s much-loved Copper Blue. And then, in October, Mould’s father died.

“It was not unexpected, but it was still tough nonetheless,” says Mould, who has written candidly about his complicated relationship with his father — an alcoholic who was physically abusive at times, but also introduced him to rock ‘n’ roll, and acted as one of Hüsker Dü’s biggest supporters in the band’s early years.

“[Losing a parent] is something most of us go through, but I don’t think I’d realize how a loss of the size really shifts your perspective…it was an emotional time. And that became the marker for the next 12 months of touring, dealing with my relationship with my family and my work.”

The record takes on four key themes or acts, says Mould: “There’s the loss, and the reflection, and then acceptance. And then there’s moving on to the future, which is how the album closes out. It’s a work about a really confusing experience.”

Backed by Jason Narducy on bass and the tireless Jon Wurster on drums (Mould shares Wurster’s time with Superchunk and the Mountain Goats), Mould channels that confusion into a something like a condensed, theatrical rock ‘n’ roll epic. (His tour for the record brings him to The Fillmore this Fri/26.)

Considering its subject matter, it’s hardly a downer of a record. “I’m sure it confuses some of the longtime fellow miserablists [to hear the bright, upbeat tunes],” says Mould with a laugh. “It’s a heavy record; it’s got its own darkness, but it has an equal amount of light to keep it balanced out.”

Beauty and Ruin also demands to be heard as an album: As a listener, even if you were to shut off the part of your brain that comprehends lyrics, it’s the cathartic, hook-driven guitar thrum throughout these missives — which builds to unrelentingly passionate levels on “The War,” marking the end of side 1 on the record, if it were an LP, before sliding into the naked clarity of “Forgiveness” — that engages your full body, that makes you question whether or not aging affects Bob Mould the way it affects regular humans, because the man honestly sounds like he could sing and play electric guitar and run a marathon at the same time.

Not so, Mould says. On days off when he’s on tour, he tries to talk as little as possible to protect his voice. “I sing really hard, probably too hard for my own good, and naturally it gets a little tougher to recover from that each night.”

When he’s not on tour, of course, he’s home in San Francisco — he’s lived in the Castro for the past five years. And yes, as a guy who made $12 playing Mabuhay Gardens in 1981 with Hüsker Dü, he’s noticed that the scene here has changed in the last few years. But it’s not all doom and gloom.

“I’ll still go to the Independent, Bottom of the Hill, Great American to see shows. I like the Chapel. There are still great clubs. But yeah, historically, when there’s been development — especially these big condo developments — when that’s on the rise in the city, at first, the neighbors are going ‘Oh, we love living next to the nightclub!'” says Mould. “Then they have their first kid, and the nightclub keeps them up at night. And they start fighting the nightclub, and if they get it closed down the neighborhood turns into a really boring place, and they don’t know it until it’s too late. I’ve seen it happen in so many cities around the world.”

“…I’m not certain how anybody can live in San Francisco, with the cost of living and the rents. It’s just such a massive change,” he continues. “Cities change. And we can fight City Hall, fight the developers…but cities evolve. And people who make art for their living are leaving for other places, which is tough because San Francisco has such an amazing history with music and how it’s affected world cultures. I’ve honestly just learned to deal with it.