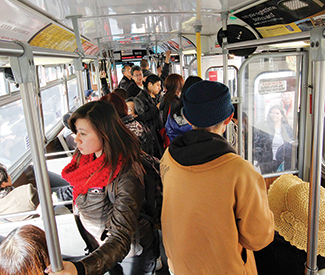 STREET FIGHT San Francisco’s November ballot is crowded. With 12 local measures and seven state measures, sifting through them can be daunting. Three local measures, Propositions A, B, and L, involve transportation and have great bearing on the city’s future.

Not to belittle the other ballot measures, some of which address critical health and housing problems, these three transit-related measures say a lot of how the city is addressing — and failing to address — the need for a sustainable transportation system.

Prop. A is the most important of the three transportation measures on the ballot, but also the most difficult to pass because it requires approval from two-thirds of voters.

It would provide $500 million for Muni, street repaving, and pedestrian and bicycle safety projects. That’s a modest sum compared to the $10 billion the city should really be spending, but it would help make 15 of the city’s busiest transit routes 20 percent faster and more reliable.

Portions of the funds would go to modernizing Muni’s maintenance shops, which need upgraded ventilation, fueling, and washing facilities and to new elevators and passenger platforms to make Muni more accessible to the elderly and disabled. Prop. A’s campaign also touts $142 million going towards pedestrian, bicycle, and motorist safety in corridors where the most death and injury have occurred.

Prop. A should really be thought of as two parts, one good, one not so good. The first part involves up to $55 million in annual revenue coming from property assessments. Since Prop. A simply replaces retiring city debt, it does not raise property taxes, but rather it sustains existing rates.

This links property values to what makes property valuable in the first place — public investment in infrastructure. As long as Prop. A is used for those 15 Muni corridors and safer streets, it is sound public policy.

The second part of Prop. A involves bonds, or borrowing money and paying interest to financiers. This is a long-used method of infrastructure finance, and was in fact how Muni got started in 1909 when voters approved creating public transit. The taxation will pay off the capital debt.

But bonds are a funding scheme that involves interest and fees that go to Wall Street — not the most progressive approach to infrastructure finance. While no one can say for sure, some critics suggest up to $350 million in debt would be incurred over the life of the bond scheme, which means Prop. A is really an $850 million package.

Ultimately, this is a regressive approach to transport finance and needs to be replaced by a more pay-as-you-go approach.

We are stuck between a rock and a hard place on Prop. A. Floating this bond now would bring in money very quickly, improving everyone’s commute, especially lower- and middle-income transit passengers. If approved it will also leverage state and federal matching funds, such as new cap-and-trade funding, hastening shovel-ready projects that many San Franciscans are clamoring to get done.

While Prop. A deals with streets and capital projects for Muni, it can’t be used to fund acquisition of new vehicles or Muni operations. This is where Prop. B comes in because it specifically involves an annual set-aside of about $22 million from the city’s General Fund to provide new vehicles and operating funds.

There’s no doubt that transportation is failing to keep up with San Francisco’s boom. New housing and offices are coming into neighborhoods where buses are already jam-packed and streets saturated with traffic. But there are a couple of problems with Prop. B.

First, Prop. B is promised as a short-term measure because the mayor can end this general fund set-aside if a local increase in the vehicle license fee is approved by voters in 2016. The VLF, which was gutted by Gov. Arnold Schwarzenegger in 2003, would bring in about $75 million to the city annually.

That the mayor would voluntarily (and it is the mayor’s discretion) sunset B in two years is a big “if” and voters are notoriously forgetful.

In the meantime, Prop. B does not come with a revenue source to account for this increasing set-aside for Muni, so something else in the General Fund must give. What that would be, nobody can say, but advocates for social service and affordable housing fear more vulnerable San Franciscans will be hurt in the 2015 city budget.

Given the incredibly slow city response to the gentrification and displacement crisis, their fears may be warranted.

My hesitation about Prop. B and tepid support for Prop. A stem from a gloomy reality in San Francisco’s politics of mobility. Today, it is easier for politicians to raise transit fares on the working poor, divert funds from social services and housing, or incur massive debt through bonds than it is to raise taxes on downtown commercial real estate and charge wealthier motorists for their detrimental impact to the city and society — both of which would be fairer ways to finance transportation.

Twenty years ago, it was estimated that a modest tax assessment on downtown offices and their impact to the transportation system would bring in $54 million a year. Today, that would likely be well over $100 million annually. But with land-owning elites and tech barons calling the shots in City Hall, there is a de facto gag order on what would be the most progressive approach to Muni finance.

Meanwhile, had Mayor Ed Lee not pandered to wealthier motorists, Sunday metering would be providing millions annually in Muni operating fees. Sup. Scott Wiener, the author of Prop. B, and his colleagues on the board, were shamefully silent about blowing that $10 million hole in Muni’s budget. They were also silent or complicit in stopping expansion of SF Park, which is smart management of our streets and would provide millions more in operations funding for Muni without needing to dip into the city General Fund to plug gaps.

Meanwhile, congestion pricing — or charging drivers to access the most traffic-snarled portions of the city during peak hours — could bring in up to $80 million annually. Together with a reestablished VLF, that would simultaneously erase the need to do Prop. B and reduce our need to incur more wasteful debt.

Instead of bonds, Prop. A’s $55 million could be coupled with an annual downtown property assessment, an annual VLF, a congestion charging zone, and revenue from an expanded SF Park, the city could borrow less, manage traffic wisely, and keep transit capacity at pace with population growth. We could avoid raiding the General Fund to subsidize Muni operations and could reduce debt simultaneously.

Transit advocates are right to cry foul when other revenue sources have been removed from consideration, mostly because of gutless reluctance to challenge wealthy landowners and motorists. This is the crux of why transit advocates, backed into a corner by Mayor Lee’s repeal of Sunday meters and the VLF, are supporting Prop. B. The “B” in Prop. B basically stands for backfilling broken promises.

And now, because the mayor and supervisors have pandered to motorists to the umpteenth degree, a small group of them feel even more emboldened and entitled to grab more. That takes us to Prop. L.

Prop. L, which seeks to reorder transportation priorities in San Francisco, is awful. It comes from an angry, spiteful, ill-informed, knee-jerk lack of understanding of the benefits of parking management (which makes parking easier and more sensible for drivers). It is a purely emotional backlash that seeks to tap into anyone angry about getting a parking ticket.

Although a nonbinding policy statement, the basic demand of Prop. L is that the city change transportation priorities to a regressive cars-first orientation. It calls for freezing parking meter rates for five years while also using parking revenue to build more parking garages. The costs of these garages would dwarf parking revenue, and these pro-car zealots don’t say where these garages would be built, or that it would ultimately siphon more money from Muni.

Proponents on this so-called Restore Transportation Balance initiative don’t really care about “transportation balance.” When you consider the origins and backers of Prop L, it’s mainly well-to-do motorists with a conservative ideology about the car. These are the very same people who have opposed bicycle lanes on Polk, Masonic, Oak, and Fell streets, and throughout the city.

These are the very same people who decried expansion of SF Park, thus making it harder, to find parking, not easier. These are the same people who complain about Muni but offer zero ideas about how to make it better. These disparate reactionaries have banded together around their animosity toward cyclists and Muni.

In the 1950s, when the love affair with cars was on the rise, San Francisco had about 5,000 motor vehicles per square mile. To accommodate more cars, planners required all new housing to have parking, made it easy to deface Victorians to insert garages, and proposed a massive freeway system that would have eviscerated much of the city.

Thankfully, neighborhood and environmental activists fended off most of the freeways, but San Franciscans failed to really take on the car. So by 1970, despite the freeway revolts and commitment to BART, automobile density rose to over 6,000 cars per square mile.

By 1990, San Francisco had almost 7,000 motor vehicles per square mile, even as population leveled off.

Do San Franciscans want to tear apart their beautiful city to be able to drive and park like Houstonians?

If proponents of Prop. L were truthful about “restoring balance” they would instead advocate a return to the car density of the 1950s, when San Francisco had just under 5,000 motor vehicles per square mile, Muni was more stable due to fairer taxes, and many of the streets in the city had yet to be widened, their sidewalks yet to be cut back.

Prop. L is tantamount to hammering square pegs into round holes. Jamming more cars into San Francisco would be a disaster for everyone. Don’t be misled, Prop. L would make the city too dumb to move. It would deepen and confuse already vitriolic political fissures on our streets and it would do nothing to make it easier to drive or park, despite its intention.

Prop. L must not only lose at the ballot, it must lose big, so that maybe our politicians will get the message that we want a sustainable, equitable, and transit-first city.