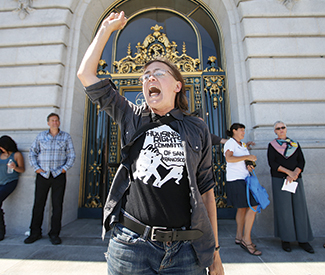 Board of Supervisors President David Chiu’s legislation attempts to strike a balance between protecting housing for permanent city residents — including tenants in rent-controlled units who are being displaced in favor of visiting tourists — and allowing San Franciscans to sometimes rent out rooms through companies such as Airbnb. That practice has mushroomed during the Great Recession even though such short-term rentals of residential units have long been illegal in San Francisco (see “Into thin air,” 8/20/13).

Among other provisions, Chiu’s legislation would require hosts to register with the city and live in their units for at least 275 days per year (thus limiting rental nights to 90), create enforcement procedures for city agencies, and protect below-market-rate and single-room occupancy units from being used as short-term rentals.

But Airbnb has also been snubbing the city for more than two years since the Tax Collector’s Office held public hearings and concluded that short-term rental companies and their hosts are required to collect and pay the city’s Transient Occupancy Tax (aka, the hotel tax), a surcharge of about 15 percent on room rentals usually paid by visiting guests (see “Airbnb isn’t sharing,” 3/19/13).

After other media outlets finally joined the Bay Guardian in raising questions about the impact that Airbnb and other companies was having on San Francisco — and with cities New York City, Berlin, and other cities taking steps to ban short-term rentals — Airbnb announced in March that it would begin collecting and paying the TOT in San Francisco sometime this summer.

But that still hasn’t happened, even though Tax Collector Jose Cisneros recently unveiled a new website clarifying that Airbnb hosts must register as businesses and pay taxes and created a streamlined system for doing so. The office is even allowing Airbnb and other companies to register as “qualified website companies” that collect and pay these taxes on behalf of hosts.

“The law does apply to these transactions,” Cisneros told us. “And the set of requirements are the same for the hosts and the website companies.”

Airbnb didn’t respond to Guardian inquiries for this story.

Meanwhile, an unusually diverse coalition of critics continues to raise concerns about Airbnb and the regulatory legislation, including renter and landlord groups, neighborhood and affordable housing activists, labor leaders, and former members of the Board of Supervisors (including Chiu predecessor, Aaron Peskin) and Planning Commission. They penned a Sept. 15 to Chiu calling for him to delay the legislation.

“Individually and collectively, we have advanced nearly two dozen additional amendments that address the issues raised by short-term residential rentals. While we are not of one mind on every issue or every suggested amendment, we are unanimous in our belief that the process you are pursuing is rushed,” they wrote. “The City will live with the intended (and unintended) consequences of your legislation for many, many years.”

Sources in Chiu’s office had already told the Guardian that he planned to keep the legislation in committee for at least one more hearing so the myriad details can be worked out, as Chiu said at the hearing as well.

“We want to have the time to continue to vet and hear all of the perspectives, and at the end of the day what I hope to do is to be able to move forward and build incentives around something that is far better than our current status quo,” Chiu said at the hearing. “This is a very complicated issue, and we all know that we need to get this policy as right as we can.”

Planning Director John Rahaim conveyed concerns from the Planning Commission that the legislation beef up the city’s ability to regulate short-term rentals.

“The commission does believe that the law should be updated to create a legal avenue for those who do want to host,” Rahaim said. “However, currently there are about 5,000 units in the city engaging in short-term rentals. It’s very difficult to know if there are units not being lived in by a full-time resident.”

A long line of speakers wound completely around the packed chamber in City Hall, awaiting their turn to speak publicly to supervisors and city residents, from 20-somethings making a lives renting out their homes to longtime tenants fearing that home-sharing will hurt city’s character.

Airbnb was represented at the hearing by David Owen, a former City Hall staffer who is now director of public policy for the company, and he was publicly confronted by Chiu on the tax issue. Chiu criticized Airbnb for failing to start collecting those taxes as promised.

“As of now, we are extremely close and you will be hearing from us about that in the near future,” Owen said, provoking audible disbelief from many in the crowd. “We have been working diligently alongside the city. This is a complicated set of issues and those involved have all worked in earnest to facilitate this request.”

When Owen was asked about enforcement of the maximum number of nights a tenant has rented out his unit, he said Airbnb’s cooperation is “akin to the city asking Home Depot.com for a list of home care purchases to see if anyone had illegally renovated their bathroom.” But city officials say they need the company’s cooperation to address its impacts. “We don’t want data, just the number of nights per permanent resident so that we can ensure that the bad outcomes of this setup aren’t occurring,” Sup. Jane Kim said. “Airbnb profits from this industry, and therefore [is] accountable to the city.”