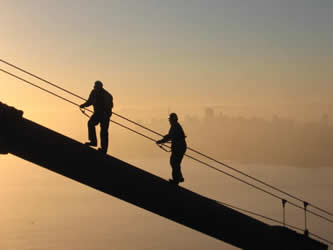 Golden Gate Bridge iron workers are on strike today [Tues/16], protesting retiree healthcare issues their union says were not addressed in 2012. Commuters will not be affected during the strike, however. Machinists Local 1414 made that choice consciously, its representative told us.

“The machinists purposefully made a decision to not impact services,” said Alex Tonisson, co-chair of the Golden Gate Bridge Labor Coalition. The coalition is comprised of the 13 various unions that work on the Golden Gate Bridge, all of whom negotiate with the district together. “We want the public to understand how serious things have gotten.”

The strike started early this morning and is scheduled to end at 3:30pm. Though the strike is not directly related to current labor negotiations for health care with the district, at this point those negotiations could best be described as… rocky.

The sticking points are health care and living wages. The Golden Gate Bridge District, with a board with nine San Francisco representatives and members spanning the Bay Area, said the increases in health care costs are still competitive in the Bay Area.

“The District has sought modest increases to the amount that Coalition employees have been contributing to their health benefits,” the Golden Gate Bridge District said, in a press statement. “District employees enjoy world class health benefits.”

But the unions noted that the cost of living in the Bay Area has skyrocketed. Housing prices are up, gas prices are up, everything is up. Though the district’s offer includes a 3 percent wage increase next year, and further increases in subsequent years, the new health care plan would cost 2 percent of workers’ wages, largely nullifying any increases. And the workers gave up much ground during the worst of the Great Recession.

“We bargained significant concessions and changes,” in previous years, Tonisson told us.

Strikes from the Golden Gate Bridge’s ferry workers could potentially impact thousands of Bay Area commuters. The labor coalition seemingly took lessons to heart from last year’s BART strike, when the public’s support of strikers waned in the face of nearly impossible commutes.

Tonisson didn’t directly comment on the BART strikes, but said “we’re definitely aware how any strike that shuts down the bridge or ferries impacts the lives of residents.”

To keep the commuting public aware of an impending strike, the coalition took out radio and newspaper ads, and passed out leaflets on ferry commutes.

“We’re hoping we don’t have to take further action,” Tonisson said. “We want them to understand it’s a possibility. The public should take that seriously.”