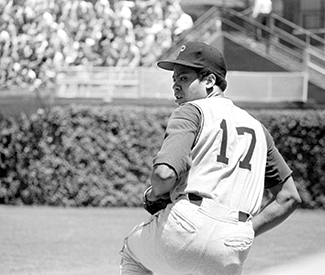 FILM Nothing has elevated the sports documentary more than ESPN’s “30 for 30” series, which engages filmmakers (including the A-list likes of Steve James, Barbara Kopple, and Alex Gibney) to bring moments of sports history into tight focus. Subjects include single incidents that had great cultural impact (Magic Johnson’s HIV announcement); lesser-known stories worthy of attention (the decades-old murder of a high-school basketball star); rivalries that have only gotten more fascinating in the intervening years (Nancy vs. Tonya); and character portraits (George Steinbrenner, Bo Jackson, Marion Jones).

No matter the filmmaking approach, the “30 by 30” films all engage, thanks to their human-interest elements. The wide world of sports stardom and infamy is populated with oversized, theatrical, glorious, or tragic characters, be they Olympians, comeback kids, or grabby fans who interfere with World Series games. No No: A Dockumentary isn’t part of the ESPN film stable, but it fits right in with the “30 for 30” aesthetic, with a subject whose charisma is undeniable even in 40-year-old game footage.

First things first: Was Pittsburgh Pirates pitcher Dock Ellis high on LSD when he threw his no-hitter June 12, 1970? We may never know for sure. And we may openly debate it, while secretly hoping it’s true. But as No No aims to make clear, that exploit — flabbergastingly insane though it was — hardly sums up Ellis’ entire life and career.

Jeff Radice’s film, bolstered by a funky score from Beastie Boy Adam Horovitz, strives to be a well-rounded portrait beyond Ellis’ rep as “the acid guy.” Ellis proves an unguarded, honest subject in audio and video interviews recorded prior to his 2008 death. Also eager to reminisce are scores of friends, family members, and former teammates, who trade Ellis anecdotes with affection (“He always started shit,” chuckles a childhood friend). Later, recalling a game in which Ellis deliberately tried to hit members of the Cincinnati Reds when they stepped up to bat, a member of the Pirates organization shrugs, “That was Dock bein’ Dock.”

His contentious behavior on the field — which, especially later in his career, spilled over into dustups with managers and owners — rarely extended to his teammates, with whom he shared deep bonds, particularly the 1971 Pirates team that won the World Series. That same year, the organization started Major League Baseball’s first all-minority lineup, with Ellis as pitcher. His antics were usually motivated in the service of a greater cause — “He took stands,” a teammate remembers — even if the execution was a tad flamboyant. Famously, he once wore curlers on the field to draw attention to racism in the league. He was also a master of media manipulation, and cultivated an aura of danger that made him a favorite of sportswriters, evidenced by the dozens of Ellis-centric headlines shown throughout the film.

In the 1970s, his rise to pop-culture prominence, a new concept in sports at the time, coincided with the mainstreaming of African American culture, which Ellis easily embraced. (His fashion-plate tendencies were legendary.) Footage of Black Panther rallies also contextualizes the mood of Ellis’ generation, which he exemplified by refusing to put up with the institutional bullshit that earlier African American players had suffered through. Jackie Robinson took note, and wrote a letter to Ellis praising the younger man’s “courage and honesty.” In one of No No‘s most moving moments, Ellis pauses while reading the words aloud, too choked up to continue.

Of course, the film also delves into Ellis’ rampant drug and alcohol abuse. It’s frankly incredible that he was able to function as a professional ballplayer for so long, since he operated under the directive “Anything that got me high, I would do it.” But No No points out that practically everyone in baseball was, at the very least, using stimulants, or “greenies,” in those days. (The Pirates’ trainer during the Ellis’ era remembers wearily telling the guys, “If you use ’em, don’t do it in front of me.”) Who needs steroids when you can pop dozens of uppers, or snort a few lines, before every game?

The Pirates’ clubhouse parties were notorious, though that World Series win suggests athletic performance didn’t suffer. But as every “30 for 30” (or Behind the Music, for that matter) devotee knows, every tale of addiction eventually turns dark. Ellis physically attacked at least two of his wives, who recall him mostly fondly even as they share their firsthand accounts of his cruel temper (his other two wives don’t appear in the film). Eventually, his game began to falter, and after one last stint at the Pirates after years playing for the Yankees and other teams, he retired.

No No‘s last act focuses on Ellis’ wholehearted acceptance of sobriety; with characteristic enthusiasm, he channeled his rock-star magnetism into working as a drug counselor for both MLB players as well as juvenile offenders. It’s a happy ending of sorts, though his vices — he died of cirrhosis — certainly hastened the end of his life.

But back to the LSD tale, so rich it continues to spread 44 years after the fact (and 30 years since he admitted to it). It inspired a lengthy recent Deadspin article, which hinted at an in-the-works feature film titled Ellis, D. (get it?); there’s also an imaginative YouTube short that animates Ellis’ narration of the story (“I was high as a Georgia pine”). He was an ace athlete, an addict, and a crusader for civil rights — and now he’s remembered as a folk hero. What a trip. *

NO NO: A DOCKUMENTARY opens Fri/5 at the Roxie.