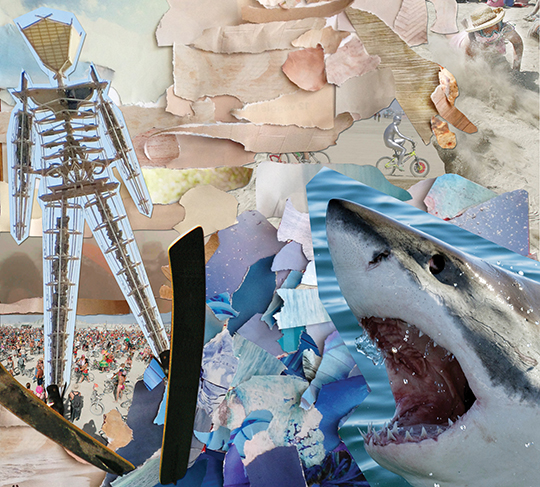 The question of when Burning Man jumped the shark is a matter of perspective, or perhaps it’s a philosophical question, but these are waters worth wading into as burners pack up this week for their annual pilgrimage to the playa.

The meme that Burning Man has jumped the shark — that is, that it’s gotten ridiculous or strayed from its original ethos — circulated more strongly this year than most after conservative firebrand Grover Norquist last month tweeted that he was “off to ‘Burning Man’ this year. Scratch one off the bucket list.”

But burners and media commentators have been saying it for years, sparked by developments ranging from the increasingly top-down control over a temporary city built with volunteer labor from the bottom-up to the sheer scale and inertia of an event that is now pushing 70,000 participants.

John Law, who co-founded the artsy Nevada desert bacchanal, walked away from Burning Man after the deadly and chaotic 1996 event, believing that the commercial and regulatory structure that followed was antithetical to the countercultural, DIY values on which burner culture was based.

The population of Black Rock City then doubled in size within two years, and doubled again within four more, prompting some burners to say 30,000 people — including a growing number of straight-laced newbies drawn by mainstream media coverage — was just too many.

At the end of 2004, dozens of the event’s marquee artists and performers launched a high-profile revolt against how Black Rock City LLC was running the event (see “State of the art,” 12/20/04). “The fix must address many issues, but the core issue for the fix is the art,” they wrote in a petition that ran as a full-page ad in the Guardian. “Art, art, art: that is what this is all about.”

But little changed. Burning Man had caught fire and the LLC was more interested in stoking the flames than controlling the conflagration. It promoted more regional burns around the world, created new offshoot organizations to spread the burner art and ethos, consolidated control of the brand and trademarks, and spelled out the “Ten Principles” that all Burning Man events would live by.

The burner backlash against that trend took many forms, but the most fiery dissent came on Monday night during the 2007 Burning Man when Paul Addis torched the eponymous Man to bring the chaos back to an event that he felt had grown too staid and scripted.

Burner officialdom responded by simply building a new Man and helping secure a four-year federal prison sentence for Addis — both decisions made without soliciting any input from the larger burner community. Coming after some corporate-style chicanery earlier that year involving control of the event’s trademark and logo (see “Burning brand,” 1/16/07), that’s when Burning Man seemed to peak, like the ramp that launched Fonzie over the sharks.

At the time, I was deeply involved with covering Burning Man culture for the Bay Guardian, reporting that would later go into my 2011 book, The Tribes of Burning Man: How an Experimental City in the Desert is Shaping the New American Counterculture.

But if jumping the shark is an idiom based on when things get really ridiculous, a point at which self-awareness withers and something becomes a caricature of what it once was, then the events of 2007 were just warm-up laps for the spectacle to come.

COMMUNITY VS. THE COMPANY

At this point, let me be clear that Burning Man is still one of the greatest parties on the planet. The Black Rock Desert is a spectacular setting, much of the art created for Burning Man each year is innovative and mind-blowing, and the experience of spending a week in a commerce-free, open-minded temporary city can truly be transformative, especially for those doing it for the first time.

I also have a tremendous amount of respect and admiration for the community members who give so much of themselves to creating Black Rock City’s art and infrastructure. And I give credit to founder Larry Harvey and other event leaders for creating such a wondrous vehicle for creative expression and community-building and keeping it running for nearly three decades.

But when an organization asserts a set of high-minded utopian values, it’s only fair to judge it by those standards. And when it claims the economic value of the labors of tens of thousands of voluntary participants as its own company assets, questions of accountability and commodification naturally arise.

For example, Burning Man has always asserted the value of “Decommodification,” which is one of its Ten Principles: “In order to preserve the spirit of gifting, our community seeks to create social environments that are unmediated by commercial sponsorships, transactions, or advertising. We stand ready to protect our culture from such exploitation.”

Yet the LLC has closely guarded its control over the Burning Man name, logo, images, and associated brands, resisting efforts to place them in the public domain and even waging legal battles against longtime burners who try to use them, including a current conflict with Canadian burners over how much the company can control a culture there that it didn’t actually create.

Licensing of the Burning Man brand and images has been a secret source of income for the company, which doesn’t publicly disclose its revenues, only its expenditures. In recent years, those brands and commodities have been transferred to a new entity controlled by the original six LLC board members, ironically named Decommodification LLC.

Some of the other Burning Man principles can seem just a farcical, including Radical Inclusion (“No prerequisites exist for participation in our community,” except the $380 ticket), Communal Effort (but “cooperation and collaboration” apparently don’t apply to decisions about how the event is managed or how large it gets), and Civic Responsibility (“We value civil society,” says the organization that eschews democratic debate about its direction and governance structure).

Meanwhile, Harvey and company have promised greater transparency and accountability at some future point, through The Burning Man Project, a nonprofit organization formed a few years ago ostensibly to take over running the event from BRC LLC (see “The future of Burning Man,” 8/2/11) .

But it hasn’t exactly rolled out that way. As I’ve reported (see “Burning questions,” 6/4/13), the original six board members have maintained tight control over all aspects of the event, appointing new nonprofit board members mostly for their fundraising ability and willingness to toe the company line, rather than seeking representation from the various constituent burner communities.

Even then, with a board hand-picked for its loyalty (which apparently goes both ways, given how the LLC has supported hagiographic Burning Man film and book projects by two of its new nonprofit board members), Harvey still remains wary of “undue meddling” by the new board, as he put it to me.

On top of that sundae, add the cherry that is Harvey’s public admission that all six board members have, as part of this transition, awarded themselves large financial settlements in amounts that will never be disclosed, and one might expect burners to revolt.

But they haven’t. Most just don’t care about these internal company dynamics (except for a few brave souls at the excellent Burners.me blog), no matter how questionable, as long as their beloved Burning Man still happens on schedule. And that’s why I think Burning Man has truly jumped the shark, launching from the ramp of a high-minded experiment and splashing down into the tepid waters of mass-consumed hedonism.

Today, almost every bucket list on the Internet — those things that everyone is advised to do before they die — includes Burning Man. It has become the ultimate commodity, a product that everyone, from all walks of life, is encouraged to consume. Doing so is easier than ever these days.

After tickets sold out for the first time ever in 2011 — and a flawed new ticketing system unilaterally created by the LLC in 2012 triggered widespread criticism and anxiety — the company opted to just increase the population of Black Rock City by more than 20 percent, peaking at 69,613 last year.

Everyone felt the difference. Popular spots like the dance parties at Distrikt on Friday afternoon or Robot Heart at dawn on Saturday reached shit show proportions, with just way too many people. And this year will be more of the same.

In the old days, going to Burning Man was difficult, requiring months of preparation with one’s chosen campmates to create internal infrastructure (shade, showers, kitchen, etc.) and something to gift the community (an art car, a bar, a stage and performances to fill it, etc.).

But with the rise of plug-and-play camps in recent years, those with money can fly into Black Rock City and buy their way into camps that set up their RVs, cook their meals, stock their costumes and intoxicants, decorate their bikes, and clean it all up at the end. Such camps have become a source of employment for entrepreneurial veteran burners, but they cut against the stated principles of Participation and Radial Self-Reliance.

While LLC board member Marian Goodell told me that “we’re big into listening mode at the moment” as they decide what’s next for Burning Man, she also claims to have heard no concerns from burners about the event’s current size or direction, and she denies the nonprofit transition was ever about loosening their grip on the event.

“We’ve never talked about turning Burning Man back to the community,” Goodell told me last week, accusing me of misinterpreting comments by Harvey when he announced the transition, such as, “We want to get out of running Burning Man. We want to move on.”

This is the world that Grover Norquist will enter next week, after being personally encouraged to attend Burning Man by Harvey, as Norquist told the National Review last month. Norquist was drawn to the event’s libertarian image rather than its stated communitarian values, a dichotomy that its leaders have never sought to resolve. Norquist even compared Burning Man to his right-wing Americans for Tax Reform, which has pressured most Republican politicians to sign pledges never to raise taxes.

“There’s no government that organizes this,” Norquist said of Burning Man, an event held on federal land, accessed by public roads, and actively regulated by local, state, and federal agencies. “That’s what happens when nobody tells you what to do. You just figure it out. So Burning Man is a refutation of the argument that the state has a place in nature.”

Yes, kiddies, the shark has been jumped. But I hope all my burner friends still have a great week in the desert.