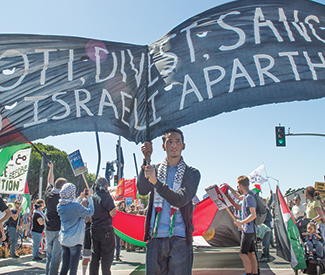 An Israeli ship that was scheduled to dock at the Port of Oakland was prevented from unloading its cargo on Aug. 17 when activists picketed at the dock entrances in protest of recent violence in Gaza.

The Zim Piraeus vessel, operated by Zim Integrated Shipping Services, Ltd., had come into dock earlier that day after the postponement of its scheduled arrival on Aug. 16, when a large crowd went to the port to participate in a march and rally dubbed Block the Boat for Gaza.

The Aug. 16 protest, which was originally planned for 5am when the ship was initially scheduled to come into port, was pushed back until 3pm after its arrival was delayed. Mainstream media outlets reported that as many as 5,000 protesters turned out for the Aug. 16 event, but Port of Oakland staff and the Oakland Police Department pegged the count at just 500, according to port spokesperson Marilyn Sandifur.

The march, which progressed from the West Oakland BART station to the main entrance of the port, culminated with speakers sounding off at a rally instead of staging a blockade as planned, since the ship remained at sea. An online ship tracking service showed that as the crowd was taking off from the West Oakland station, the vessel was still off the coast of Santa Cruz.

In the early evening on the following day, in a hastily planned action organized via Twitter and text-message alert, groups of 20 to 50 protesters bearing signs and flags showed up and began picketing outside four entrance gates leading into Berths 57 and 59.

“Since the end of the day yesterday, we had kind of been monitoring whether or not the ship was going to be coming,” explained organizer Sharif Zakout. “We weren’t sure whether it was going to skip Oakland entirely, or if they were going to try and come again today, as they ended up doing. … When we first got here, there were about 10 to 15 of us, and about 10 cops. We just started walking in circles.”

The picketing continued about 5-8 p.m., while a small number of Oakland police officers stood calmly in lines blocking the gates to dock entrances. The small picket line nevertheless prevented dockworkers from beginning their shifts and unloading cargo. The shipping company did not respond to requests for comment.

A member of International Longshore and Warehouse Union Local 10, who stood nearby observing the protest and declined to be named or quoted, explained that there is a low threshold for the union to deem a picket line to be unsafe to cross. That’s partially due to a history of police use of rubber bullets at the port, causing dockworker injuries when a 2003 port shutdown was mounted in response to the first Iraq war. Normally, an independent arbitrator would have made the call, but since union members are currently working without a contract, that decision was made independently.

Around dusk on Aug. 17, organizer Lara Kiswani, executive director of the San Francisco-based Arab Resource & Organizing Center, confirmed to reporters that she’d gotten word from ILWU Local 10 that dockworkers arriving for the evening shift had been turned away and sent to the union hall instead.

“Our members have been going to the union halls every morning, at five in the morning, to the hiring halls, where the workers go and get their assignments for the day,” Kiswani explained in an Aug. 16 interview. “We go there … to leaflet, and let them know about this action, because we didn’t want to just show up.”

Clarence Thomas, speaking on Aug. 16 as a rank-and-file member of ILWU Local 10, noted that the union had supported a similar blockade of an Israeli vessel that took place in 2010, in response to an Israeli attack on a flotilla that was ferrying humanitarian workers to Gaza.

“I think it was remarkable because it was the first time that organized labor had actually ever taken a position against the Israeli government,” Thomas said. “And they passed resolutions supporting that action, and that vessel didn’t work for 24 hours. Now, four years later, another action is taking place against the Zim vessel, this time for the atrocities that have taken place in Gaza.”

Thomas said this protest could become part of a broader movement: “The Zim vessel doesn’t just come to the Port of Oakland. It goes to other ports. What will the community do, and what will longshoremen do, when that vessel goes to those ports? If they followed the example here, they’re not going to work it.”

In a statement that was included in a press packet prepared by protest organizers, Jack Heyman, a retired member of ILWU Local 10 and chair of the Transport Workers Solidarity Committee, noted that Aug. 16 was selected to commemorate striking mineworkers who were killed in 2012 by the South African government in what became known as the Marikana Massacre.

“It has become a seminal event in the history of South African working class struggles,” Heyman wrote. “The Transport Workers Solidarity Committee calls on transport workers the world over to refuse to work Israeli cargo on ships, rails, planes, or trucks on Aug. 16.”