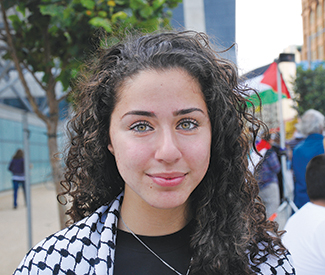 Bay Area demonstrations held in response to the Israeli-Gaza conflict continued last week, and planning is underway for more.

Activists with Arab Youth Organization joined other coalition members at an Aug. 6 rally outside the San Francisco Federal Building, where Rep. Nancy Pelosi’s office is located, to call upon the U.S. government to end aid to Israel.

“We’re here because humans are dying,” said Linda Ereikat, a 17-year-old Palestinian American who was born and raised in the Bay Area and recently spent a month visiting her grandparents in the West Bank. “We’re not here because we’re part of a political party. We don’t care about Hamas. We care that our people are dying, and our people are under siege. And it’s just crazy.”

Ereikat said her travels opened her eyes to the stark contrast between her carefree life in America and her extended family’s day-to-day reality in the West Bank. During one night of her visit, she said, Israeli soldiers raided her grandparents’ village. “It was in the middle of the night. We heard tear gases,” she said. “We heard dogs, because they brought their dogs to search. There were so many soldiers in our city.” Her fellow activist Samha Ayesh, a 21-year-old organizer with AYO, said he had family in Palestine and had lost some friends in the conflict.

On Aug. 16, a coalition of pro-Palestine activists plans to stage a protest at the Port of Oakland — which could involve blockading a ship with ties to the Israeli government.

These aren’t the only Bay Area street demonstrations being held in response to the Israeli-Gaza conflict. Hundreds turned out for a pro-Israel march in San Francisco last weekend. And on Aug. 3, pro-Israel activists staged an action where they sounded a long emergency whistle while activists threw themselves face-down on the ground in Union Square, as someone on a microphone intoned: “In Israel, you get 15 seconds to run for your life before a rocket from Gaza strikes.”