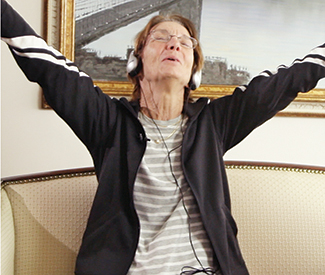 FILM A remarkably effective — and remarkably simple — form of music therapy pioneered by New York social worker Dan Cohen finds a strong advocate in filmmaker Michael Rossato-Bennett, whose documentary Alive Inside benefits greatly from its awesomely cinematic results. The doc sprang from a 2011 YouTube video, “Man In Nursing Home Reacts to Hearing Music from His Era,” a six-minute clip that went viral after a Reddit post. (It’s since garnered nearly 1.5 million views.)

The scene is a typically depressing nursing home, where an elderly man named Henry sits hunched over in a wheelchair. But once he’s given a pair of headphones and an iPod loaded with the gospel songs he used to love, he lights up. His eyes open wide. He boogies in his chair. He croons along at the top of his lungs. Even more incredibly, after the headphones are lifted, he’s able to converse with Rossato-Bennett, enthusing about Cab Calloway and his long-ago job as a “grocery boy.” In just seconds, the music he’d long forgotten seemingly zapped Henry with fresh life, enabling him to connect with his memories and express himself with surprising energy.

No wonder Rossato-Bennett, who filmed numerous examples of this phenomenon over the three years he followed Cohen, chose to make Alive Inside his first feature-length doc. Even though we know what to expect after seeing Henry’s reaction, the before-and-afters are intensely moving with every patient: the bipolar schizophrenic whose constant distress is alleviated, however briefly, by a spontaneous encounter with a funky tune; the man with dementia who sparks with his healthy wife, to her teary-eyed delight, as they listen to the Shirelles; the middle-aged woman whose frustration with her forgetfulness is soothed by a much-needed dose of the Beach Boys. And it’s not just the pleasure of hearing the music, Alive Inside suggests; it’s the regained sense of identity and emotion that music triggers in people whose memories have been essentially wiped clean.

Though the film could’ve probably sustained interest just based on these small yet monumental moments, Rossato-Bennett widens his focus to include neurology — Dr. Oliver Sacks explains how music is “a back door into the mind” for patients with Alzheimer’s and related diseases — and the history of American elder care, expanded upon by physicians and others who think the current system favors efficiency over nurturing. (It also struggles against a culture where youth is prized, and aging people are seen as something to be hidden away.) Care facilities emphasize regimented schedules, and most patients are overly medicated. As activist and geriatric medicine specialist Dr. Bill Thomas points out, the big bucks in health care are in pharmaceuticals. One social worker’s dream of distributing iPods filled with big band jams and other music tailored specifically to each patient is a fringe idea at best, no matter how effective it’s proven to be.

Alive Inside also investigates music’s primal powers, with Bobby “Don’t Worry, Be Happy” McFerrin and Musicians for World Harmony co-founder Samite Mulondo offering their expertise. More of an enigma is Cohen (Rossato-Bennett handles the occasionally over-sentimental narration), a lanky, soft-spoken man who cares deeply about the people he’s trying to help, even doing an awkward shuffle with a patient enjoying her first iPod experience. Cohen’s nonprofit, Music & Memory, came about as a result of his volunteer work in nursing homes, which he describes as a “life-changing experience.” Unfortunately, not everyone shares his point of view. We see him networking at a long-term care conference with some success, but he’s also shown pleading his case to facilities that refuse to accommodate him, and prodding deep-pocketed corporations that decline to donate.

Alive Inside‘s delighted chronicling of its own viral origins — Henry and his gospel awakening — caps the movie with a sense of hope that maybe The Kids can be bothered to care about The Olds, after all. One way to start: At screenings across America, including at San Francisco’s Opera Plaza, Cohen’s Music & Memory will have donation boxes to scoop up working iPods for its cause. *