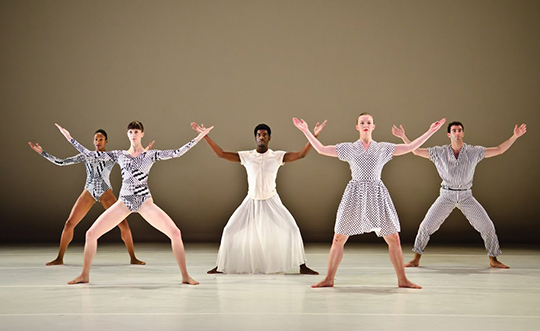 DANCE If you have attended any ODC Theater presentations in the last couple of years, chances are you’ll recognize Christy Bolingbroke. Until recently, she was the ODC Theater director, and the one who welcomed audiences with unmatched enthusiasm. Now that she has added ODC deputy director for advancement to her title, she will be able to pour even more energy into two of her passions: performance and connecting audiences with it.

One of her initiatives, the Walking Distance Dance Festival, has offered double bills on two different ODC stages and allowed audiences to discuss the performances while navigating between the venues. During the festival’s late May run, the 300 block of Shotwell Street never looked more alive. Bolingbroke’s latest project is the ambitious, almost month-long Music Moves Festival (July 31-Aug. 24), which looks at the relationship between dance and music.

The timing of the festival, Bolingbroke explains, is tied to ODC’s first Next Moves Summer Intensive, a two-week residency program for professional and budding dancers which ODC hopes to expand into something larger, not unlike the Jacob’s Pillow Dance Festival in Massachusetts. Music Moves is a way to expose these students — and the audience — to different ways of thinking about looking and listening.

Music and dance, of course, have been connected since time immemorial. Many culturally specific genres, such as African, Hawaiian, Indian, and flamenco, are still unthinkable without this symbiotic relationship. Concert dance, ballet included, however, has developed a more ambiguous association with musical compositions. Think of Merce Cunningham’s works, where the sound simply ran along a parallel track to the dance. Today’s choreographers may choose an existing score, commission one, work in tandem with a composer, forego music entirely, or use it solely in the background like wallpaper.

As marketing director for the Mark Morris Dance Group, Bolingbroke became intimately aware of how dance and music inform each other. But she also realized that dance audiences are much smaller than those for music. “So if I can pull in a few more people to see dance because of the music that was used, that is exciting for me,” she says. “We’re not booking the super stars of contemporary dance. This is really for audiences interested in the creative process, and in being able to think about performance in a different way.”

The festival opens with ODC/Dance’s highly popular “Summer Sampler,” which this year includes Brenda Way’s Breathing Underwater, a collaboration with cellist Zoe Keating; Way’s Life Saving Maneuvers, set to a commissioned score by Jay Cloidt; and KT Nelson’s Scramble, her take on a couple dancing to a Bach cello suite.

The festival’s closing night program highlights alumni of ODC’s Pilot program: deaf dancer Antoine Hunter and ballet-trained Milissa Payne Bradley. Says Bolingbroke, “Antoine has interesting things to say about the fact that we hear music, while he feels it. Milissa challenges herself not to start choreography with music, as she had been trained to do.”

Other programs include “Tuesday is Tunesday” setups, with choreographers like Eric Kupers — who started out in modern dance, but with his Dandelion Dance Theater’s Bandelion Ensemble has increasingly blurred lines between dance, music, and community action (Aug 5). There’s also body music pioneer Keith Terry, making a rare local appearance on his home turf with his Corposonic ensemble (Aug 12).

Bolingbroke is also intrigued by the intersection of concert performance and pop culture, so the idea of having a culturally-rooted form like taiko collaborating with a DJ proved irresistible. So for one night it will be San Jose Taiko x The Bangerz in what the program calls “a musical conversation between taiko and hip-hop” (Aug 17).

Also on the pop side of this festival will be Napita Kappor’s Hindu Swing, her fusion of Bollywood and jazz; she shares an evening with Cuba’s salsa band Rueda Con Ritmo (Aug 22-23). Pearl Marill, who likes to meld theater, modern dance, and comedy, will premiere Some Bodies Confessional (Aug 10-11). Irresistibly Drawn, Joe Goode’s evening of song and dance (Aug 3-4), includes former company member Marit Brook-Kothlow and singer-songwriter Holcombe Waller, who will also have his own show (Aug 19).

Kate Weare is returning one more time to set work on ODC’s dancers. Drop Down is her take on the tango, and Still Life with Avalanche is a collaboration with Brenda Way. The evening also features Rande Paufve’s recent Soil, her musing on aging, set to a live cello and piano score (Aug 14-16).

Finally, the young but already much acclaimed Dance Heginbotham will present three works, including one of the late Remy Charlip’s Air Mail Dances (Aug 7-9). Says Bolingbroke, “I have been interested in them for a while, particularly as a 21st century version [of] Mark Morris,” with whom John Heginbotham danced for 14 years. “So it’s exciting to be able to present the company’s West Coast debut.” *