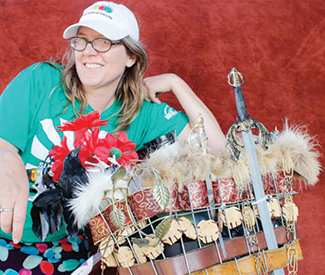 When Susan King attends the Aug. 24 Sunday Streets in the Mission District — the 50th incarnation of this car-free community gathering, coming the week before her 50th birthday — it will be her last as director of an event she started in 2008.

That successful run was made possible by King’s history as a progressive community organizer who also knew how to do fundraising, a rare combination that has made Sunday Streets more than just a bicycle event, a street faire, or a closure of streets to cars that the city imposes on its neighborhoods on a rotating basis.

Instead, King took the ciclovia concept that started in Bogota, Colombia in the late ’70s — the idea was creating temporary open space on streets usually dominated by cars (See “Towards Carfree Cities: Everybody into the streets,” SFBG Politics blog, 6/23/08) — and used it as a tool for building community and letting neighborhoods decide what they wanted from the event.

San Francisco was the third US city to borrow the ciclovia concept to create open streets events — Portland, Ore, was the first in June 2008, followed quickly by New York City — but the first to do one that didn’t include food trucks and commercial vending, which Sunday Streets doesn’t allow.

“It’s not a street fair, it’s about meeting your neighbors and trying new things,” King said, referring to free activities that include dance, yoga, and youth cycling classes and performances. “It’s a really different way of seeing your city. A street without cars looks and feels different.”

Now, after seeing how Sunday Streets can activate neighborhoods and build community, and watching the concept she helped pioneer be adopted in dozens of other cities, King says she’s ready for the next level.

“I want to apply what I know on a larger scale, ideally statewide,” King said of her future plans. “This really opened my eyes up to the possibilities.”

After a lifetime of progressive activism — from grassroots political campaigns to city advisory committees to working with the Green Party — King knew the value of listening to various community stakeholders and earning their trust.

That distinction has been an important one, particularly in neighborhoods such as Bayview and the Western Addition, where there is a long history of City Hall officials and political do-gooders trying to impose plans on neighborhoods without their input and consent.

“We worked really closely together and she gave me a lot of leeway to do Sunday Streets in a way that it worked for the community,” said Rebecca Gallegos, who managed public relations for the Bayview Opera House 2010-2013. “I can’t say enough great words about Susan. She was a truly a mentor to me. They’re losing someone really great.”

The first Sunday Streets on Aug. 31, 2008, extended from the Embarcadero into Bayview, opening up that neighborhood to many new visitors. King cited a survey conducted at the event showing 54 percent of respondents had never been to Bayview before.

“Susan wore a lot of hats. Not only did she create community in all the neighborhoods in San Francisco, but she knew how to go after the money,” Gallegos told us. “She walks the walk and doesn’t just talk the talk.”

“Susan came in and was very warm and open to our concerns. She was a joy to work with,” said Mitchell, who went on to work with King on creating Play Streets 2013, an offshoot of Sunday Streets focused on children.

The neighborhood was still reeling from a massive redevelopment effort by the city that forced out much of its traditional African American population and left a trail of broken promises and mistrust. Mitchell said King had to spend a lot of time in community meetings and working with stakeholders to convince them Sunday Streets could be good for the neighborhood — efforts that paid off as the community embraced and helped shape the event.

“It was nice to know the Fillmore corridor could be included in something like this because we were used to not being included,” Mitchell told us. “Community organizing is not an easy job at all because you’re dealing with lots different personalities, but Susan is a pro.”

It wasn’t community organizing that got King the job as much as her history with fundraising and business development for campaigns and organizations, ranging from the San Francisco Symphony to the San Francisco Women’s Building.

At the time, when city officials and nonprofit activists with the Mode Shift Working Group were talking about doing a ciclovia, King was worried that it would get caught up in the “bike-lash” against cyclists at a time when a lawsuit halted work on all bike projects in the city.

“I thought that would never fly,” King said. “We started Sunday Streets at the height of the anti-bike hysteria.”

But her contract with WalkSF to work on Masonic Avenue pedestrian improvements was coming to an end, she needed a job, and Sunday Streets needed a leader who could raise money to launch the event without city funds.

“I know how to raise money because I had a background in development,” said King, who raised the seed money for the first event with donations from the big health care organizations: Kaiser, Sutter Health/CPMC, and Catholic Healthcare West. And as a fiscal sponsor, she chose a nonprofit organization she loved, Livable City, for which Sunday Streets is now a $400,000 annual program.

King had a vision for Sunday Streets as an exercise in community-building that opens new avenues for people to work and play together.

Immediately, even before the first event, King and Sunday Streets ran into political opposition from the Fisherman’s Wharf Merchants Association, which was concerned that closing streets to cars would hurt business, and progressive members of the Board of Supervisors who were looking to tweak then-Mayor Gavin Newsom, whose office helped start the event.

City agencies ranging from the Police Department to Municipal Transportation Agency required Sunday Streets to pay the full costs for city services, something that even aggressive fundraising couldn’t overcome.

“We were in debt to every city department at the end of the second year. It was the elephant in the room going into that third year,” King said.

But the Mayor’s Office and SFMTA then-Director Nat Ford decided to make Sunday Streets an official city event, covering the city costs. “It was the key to success,” King said. “There’s no way to cover all the costs. The city really has to meet you halfway.”

King said that between the intensive community organizing work and dealing with the multitude of personalities and interests at City Hall, this was the toughest job she’s had.

“If I would have known what it would be like,” King said, “I would never have taken the job.”

But King had just the right combination of skills and tenacity to make it work, elevating Sunday Streets into a successful and sustainable event that has served as a model for similar events around the country (including at least eight others also named Sunday Streets).

“The Mission one just blew up. It was instantly popular,” said King, who eventually dropped 24th Street from the route because it got just too congested. “But it’s the least supportive of our physical activity goals because it’s so crowded. It was really threatening to be more of a block party.”

That was antithetical to the ethos established by King, who has cracked down on drinking alcohol and unpermitted musical acts at Sunday Streets in order to keep the focus on being a family-friendly event based on fitness and community interaction.

Even the live performances that Sunday Streets hosts are required to have an interactive component. That encouragement of participation by attendees in a noncommercial setting drew from her history attending Burning Man, as well as fighting political battles against the commercialization of Golden Gate Park and other public spaces.

“It was my idea of what a community space should look like, although I didn’t invent it…We really want to support sustainability,” King said. “We’re not commodifying the public space. Everything at Sunday Streets is free, including bike rentals and repairs.”

As a bike event, the cycling community has lent strong support to Sunday Streets, with the San Francisco Bicycle Coalition strongly promoting it along the way.

“The success of Sunday Streets has been a game changer in showcasing how street space can be used so gloriously for purposes other than just moving and storing automobiles. At every Sunday Streets happening we are reminded that streets are for people too,” SFBC Director Leah Shahum told us. “Susan’s leadership has been such an important part of this success.”