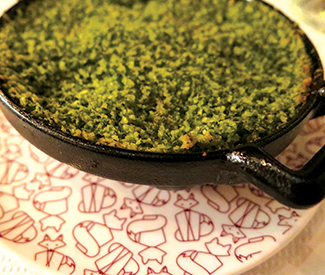 One of the more exciting places to hit the scene in a summer full of tons of new openings is Monsieur Benjamin (451 Gough, SF. www.monsieurbenjamin.com), a project from Corey Lee (Benu), with chef Jason Berthold (previously RN74, and French Laundry and Per Se, where he worked with Lee) and Thomas Palauqui.

Lee has wanted to open a late-night bistro in San Francisco for some time, something he thought was missing from our local scene. He’s right. So now we have a hot spot open until 1am nightly in Hayes Valley, serving a modernized and technique-driven take on classic French dishes like escargots and sweetbreads Grenobloise, plus steak frites, roast chicken, and blanquette de veau. The list of entrées is significant, with 13 in all.

You can come by for a cocktail and oysters at the intimate marble bar before the opera, or find a spot at a communal table for small plates and appetizers to pair with wines from smaller family-owned producers from France after the symphony (or when you get out of work). You’ll definitely be entertained with peeks into the gleaming open kitchen — the joint is staffed up. The vibe is lively, and the room is chic yet understated, kind of like Isabelle Huppert. Coming soon: weekend brunch and a prix-fixe theater menu. Hours are nightly 5pm–1am for now.

The original location of Loló in the Mission has been tweaked by the owners and reopened as Loló Cevichería (3230 22nd St, SF. www.lolosf.com/lolo-cevicheria), serving a casual and affordable menu of ceviches — five in all — and some Loló classics, like the taco tropical and tuna tacon. It’s a fun place to hang out for an impromptu meal, and there will be plenty of beverages to get you feeling good, from a couple different sangrias to agave wine margarita slushies (which include one made with tamarind).

If you’re over waiting for a table at the recently opened Loló on Valencia — that place is caliente! — or if you’re a larger party than that funky little spot can handle, this one’s for you. Designer and business partner Lorena Zertuche has updated the space, featuring lots of tropical birds (caw caw!) and of course a riot of bright colors. The grand opening is Wed/16; hours are Mon–Thu 6pm–10pm, Fri–Sat 6pm–12am, closed Sun.

While fans of the hefty hoagies from 1058 Hoagie in SoMa will be sorry to hear that joint is closed, here’s your silver lining: Owner Adam Mesnick has turned the space into Rye Project (180 Seventh St, SF www.ryeproject.com), his take on a Jewish-style deli. He’s calling it “Newish Deli.” This is the place for overstuffed corned beef and pastrami sandwiches on rye bread from a special source in Detroit ($14). Other choices: roast beef, tuna salad, kosher or hard-beef salami, and turkey. You want double meat/double bread? Go for it for $6 extra.

Also coming in from back East: par-baked bagels from New York that are finished here (top those bad boys with lox, smoked trout, or Mesnick’s smoked whitefish salad). A whole other category to explore is his creative salads, including the Rye House ($13), with romaine, corned beef, Muenster cheese, hard-boiled egg, cucumber, cherry tomato, and chickpeas. Bonus: All salads come with a bagel, because hey, more is more. Additional options are soup of the day (expect some matzoh ball soup in rotation), chopped liver, mac and potato salad, and other classic deli faves. Eat, eat! Open Mon–Fri 11am–4pm.