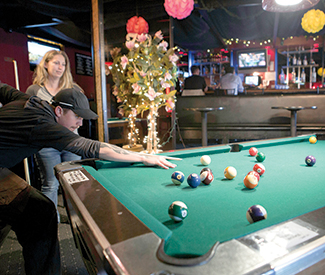 THE WEEKNIGHTER I don’t know, man. Would I believe what, that cocktails exist? Yes absolutely, I have four in my belly right now. Is this an X-Files themed bar? I hope so! Why is the grammar so totally screwed up in the name of this bar? What is the goddamn question anyways?

These are all things I was thinking as Ashley and I walked into Would You Believe? Cocktails (4652 Geary Blvd., SF. 415-752-7444). We’d wandered down from Trad’r Sam on our little weeknight adventure in the Richmond and here we were. Walking in I surveyed the scene: sitting around the bar was a crowd of Asian folks of various ages. Some were drinking and talking, others flirting with each other, while still others were at the short end of the bar slamming down dice. One girl kept squealing very loudly every time the dice went down. I don’t think she quite understood the game.

“I know what the question is,” I told Ashley. “It’s ‘Would You Believe how cheap the drinks are here?!'” Well drinks were $4, a shot and a beer combo was $5, and Hennessey was also $5. I don’t drink Henny, but I spend enough time in bars to know that’s insanely cheap.

I stuck with my usual vodka soda, and we picked a place on a banquette to soak in the atmosphere. In this case the “atmosphere” was fake flowers, lots of mirrors, low lighting accented with some blues and purples, and songs by 2 Chainz. I fucking hate 2 Chainz.

My favorite part of Would You Believe was the sign outside that said “Forecast for Tonight: Alcohol. Low Standards and Bad Decisions.” I’m always a sucker for clever sidewalk signs. I was telling Ashley this when a group of five guys rolled in, none of which could’ve have been more than 22 years old. Considering they were all so clean cut and of pretty much every ethnicity but Asian, I said, “Those guys have to be hostel kids. There’s no way they are local.” I strained to hear what their accents were but dice kept banging on the bar and the damn woman kept squealing about it. Nobody likes dice that much. The whole scene was pretty weird.

The new boys flirted with the pretty bartenders and then played some pool and Ashley and I lost interest in figuring out what their accents were. The night was misty and cold and the thought of my warm bed was enough to draw us out of there and send us on our way. But we still never got the answer to the question “Would You Believe?”