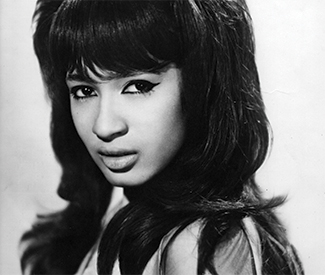 LEFT OF THE DIAL How do you address a woman who toured with the Rolling Stones as an opening act, while being chased after by a baby-faced John Lennon? Who had five singles in the Top 40 by the age of 21? Who perfected the beehive hairdo two decades before Amy Winehouse was even born?

“Call me Ronnie,” purrs Ronnie Spector, age 70, on the other end of the line. You can almost hear the hairdo.

The woman who influenced performers like Billy Joel, Patti Smith, and Joey Ramone is calling from a suburb near Danbury, Conn., where she lives with her manager/husband of 30 years, Jonathan Greenfield. Their life is a quiet one. Spector — who, as the lead singer of the Ronettes, perhaps the most iconic girl group of the early ’60s thanks to hits like “Be My Baby,” has been described as the original bad girl of rock ‘n’ roll — likes to read and watch movies. She goes grocery shopping, does a little cooking, goes to Bed, Bath & Beyond. Three times a week she goes to an office and dictates responses to her fan mail to an assistant (she doesn’t like to use the Internet much herself). She doesn’t drink (never has, she says), but she still smokes (Marlboro Reds).

Okay, and every now and then she’ll catch up with her old friend Keith Richards, who lives 15 minutes away.

For the past two years, the ’60s icon has also been on tour again: Her one-woman stage show, “Beyond the Beehive,” chronicles her tumultuous life from childhood onward, punctuated with songs, stories, behind-the-scenes dirt and dishing. She’ll bring elements of that show to the Bay Area July 4 weekend, when she performs at Brick and Mortar Music Hall Sat/5 (in a ridiculously fabulous-sounding evening hosted by Peaches Christ) and at Burger Boogaloo in Oakland’s Mosswood Park Sun/6.

So: Why would someone who’s lived such a full life — not to mention a self-described homebody — put herself through the rigors of a touring stage show at a time in her life when she could be resting on her laurels? Or at least, one might think, just resting?

“Because I love it — it lets all of my emotions out,” says Ronnie, sounding straight-up girlishly, genuinely excited. “When I first started, of course, I was scared to death: I’ve been on stage singing since I was a little girl, but I never had to sit down and talk to an audience. Now, I feel so good after I do that show. I go through the good, the bad, and the ugly. I tell them everything, and I’m nervous every time, but I love it.”

“I stopped going to therapy when I started ‘Beehive’!” she cries. “Who needs a psychiatrist? My show is my therapy. The audience loves it, I love it, and I get to tell them things I never got to talk about.

“Because a lot of stories from my life — ooh, if walls could talk…”

FROM HARLEM TO HOLLYWOOD

Born to a Cherokee and African American mother and an Irish father, a drummer, on Aug. 10, 1943, Veronica Bennett grew up in Spanish Harlem, in a large, working-class family that served as her first audience.

“When I was 7 or 8, me and eight of my cousins were in the lobby of our building and I was singing ‘Why Do Fools Fall In Love’ — the sound was great down there, the tall ceilings — and my cousins all started clapping,” she recalls. “And I thought, I got it! From that point on, all I thought about was singing. I didn’t do homework. The teachers were calling my house saying ‘She’s just singing for the class.’ It was all I cared about.” She spent hours singing with her sister, Estelle Bennett, and cousin, Nedra Talley, the trio that would go on to become the Ronettes.

When the girls were young teens, as if to say “Okay, let’s see what you’ve got,” Ronnie and Estelle’s mother, a waitress at a restaurant next door to the Apollo Theater, managed to get the girls a spot on the bill at the legendary venue’s amateur night. They didn’t win that evening’s competition, but the audience applauded (as opposed to throwing tomatoes), and Spector still remembers the feeling. “That was it. It was the toughest crowd in town, and they liked us,” she says.

The rest is show business history: The signature eye makeup and impeccable on-stage style. Hordes of shrieking fans during appearances on American Bandstand. The UK tour on which the girls spent evenings flirting and dancing with the Beatles. Bottles upon bottles of hairspray.

And, of course, the group’s relationship with wunderkind producer Phil Spector, the man responsible for the “wall of sound” instrumentation that makes so many ’60s records sound so beautifully, chart-toppingly lush. “Be My Baby,” a song Brian Wilson has called the best pop song ever made (at 21, he was driving when he first heard it and had to pull over), is considered the first pop record to use a full orchestra, with horns, multiple pianos, and guitars layered generously over each other. Backup singers included Darlene Love and a then-unknown couple named Sonny and Cher.

To be sure, Spector was ahead of his time. But 30 seconds of any Ronettes song will tell you everything you need to know about what made the group stand out from the pack.

As the Time magazine writer Michael Enright once put it: “Ronnie had a weird natural vibrato – almost a tremolo, really – that modulated her little-girl timber into something that penetrated the Wall of Sound like a nail gun. It is an uncanny instrument. Sitting on a ragged couch in my railroad flat, I could hear her through all the arguments on the street, the car alarms, the sirens. She floated above the sound of New York while also being a part of it…stomping her foot on the sidewalk and insisting on being heard.”

It’s that same combination of vulnerability, sex appeal, and determinedly tough-as-nails I’ve-been-through-hell-so-don’t-test-me bravado that still attracts fans to her shows some 50 years later — despite the fact they’ve probably already heard a good chunk of the story.

Her low points are well-documented: the nightmarish marriage to a jealous Phil Spector that, according to her 1989 memoir, involved death threats and the young singer being physically locked in his mansion. Then rehab, which she later said was just a means of escape from her ex-husband (who, it must be mentioned, as of this writing, is five years into a 19-year sentence for the 2003 murder of actress Lana Clarkson — after a trial in which at least five female acquaintances recounted him holding them at gunpoint).

Then there was life after Phil. Ronnie burst back onto the charts in 1986 as a guest on Eddie Money’s “Take Me Home Tonight” (with her signature whoa-oh-oh-ohs front and center), may or may not have had a brief fling with David Bowie, released a critically acclaimed solo album produced by Joey Ramone, married her second husand, had two kids (not necessarily in that order). In 2000, after a 15-year royalty battle, a New York State Supreme Court judge ruled that Phil Spector owed the Ronettes $2.6 million; despite licensing their songs to everything from commercials to Dirty Dancing over the previous four decades, he’d only ever paid the women $14,000 and change.

And now? She’s an unmistakably happy woman, and she clearly likes to talk. It doesn’t take much to get her going on today’s pop music: “It’s like a circus! You can’t see a show without dancers and lights and booms and bangs. It takes away from rock ‘n’ roll. Everyone has to have ridiculous outfits, and you don’t even know who they are by the time their record comes out. People don’t have an identity! Miley Cyrus gets up there with an [inflatable] penis coming out of her? Hello? What is that?”

“You take away the dancers, you take away the choreographers, and [with a lot of pop stars] you will not see a real artist there,” she says. “And everybody lip-syncs. In my day you didn’t do that; I would never do that. To me, it’s cheating the audience.” (Ronnie’s voice has stayed strong, she says, because she’s never liked parties.)

However: “I do love that today’s women artists [are allowed to] write their own material, which we couldn’t. You look at the artists from the past like me, the pioneers, we ended up with nothing because of royalties. Now, Taylor Swift is one of the richest girls in rock ‘n’ roll.”

She also has nothing but kind words for Amy Winehouse — a singer who owed her obvious debts in the vocal and visual style department, and whose “Back To Black” Ronnie sometimes covers in return (once, in London, with Winehouse trying not to be spotted in the audience). “She was a dirty rock ‘n’ roll singer, her voice was real, and she was real,” she says. “I miss her.”

Aside from not really enjoying Top 40 radio, however, Ronnie says she’s loving life — and you believe her. She talks like a survivor — not just of an abusive marriage, but of a time and a place in pop music that chewed young women up and spit them out with astounding ease.

“But you know what? What goes around comes around,” she says conspiratorially. “Karma’s a bitch, and it’ll bite you right in the ass. He’s in prison, and I’m not. I’m out there singing, having the time of my life, and I have everything I want: My shows, a great husband, everything I wanted back then. Turns out you can have your cake and eat it too.” A hearty laugh.

“Otherwise, what’s the point of having cake?”

Ronnie Spector will perform at the Burger Boogaloo After-Party (Sat/5 9pm, $35) at Brick and Mortar Music Hall and at Burger Boogaloo Day 2 (Sun/6, all day, $35-$50) in Oakland’s Mosswood Park.