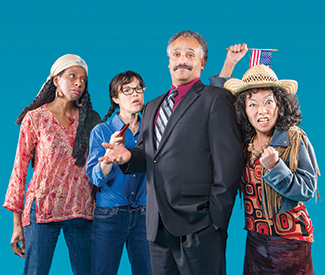 THEATER The Fourth of July kicked off a revolution once; could it happen again? Each year in Dolores Park the San Francisco Mime Troupe gives it a shot, kicking off its touring season of free outdoor shows with a musical-comical call to arms — an appeal to popular solidarity against the very real forces of oppression on a holiday gleefully synonymous with keg-tapping.

It’s a task the legendary 55-year-old artist-run collective pursues with passion and its own unique flair: a larger-than-life mix of Italian commedia dell’arte storytelling and American-style melodrama, with a smattering of original songs thrown in for good measure. It’s an eye and ear catching spectacle that this year hits close to home, wading into the conflicts and displacement churned by a rapidly transforming high-tech, high-cost city.

Ripple Effect is set in present-day San Francisco, or just offshore in the bay, in a small tour boat where three women of very different backgrounds reckon with one another. The boat’s captain is an ardent but paranoid Lefty activist (played by Velina Brown). Her passengers are a Vietnamese beautician and all-American immigrant (Keiko Shimosato Carreiro) and a newbie tech worker from small-town Nebraska (Lisa Hori-Garcia) whose popular app landed her a corporate job in the big city.

Against the backdrop of a yawning wealth gap, real estate speculation, an epidemic of evictions, Google bus protests, and diminishing diversity, Ripple Effect‘s three protagonists (all played by longtime Mime Troupe members) explore the tensions that divide them and the common ground beneath them. (The Mime Troupe is also linking the play to a series of community forums, at its Mission studio and after select performances, in which various community leaders will facilitate public dialogue around the show’s themes and the growing divide in the city.)

“It’s always tough because we do tour the shows, so we don’t want to make them too specific to San Francisco,” says Mime Troupe actor-writer Michael Gene Sullivan, who plays several secondary roles in Ripple Effect, including a certain wily CEO. “But we feel like there are so many issues going on within the city that people around the state, really around the country, will be able to relate to — not just housing and how the cities are changing, but also the struggle within the working class, the way people are being pitted against each other while the incredibly rich are getting incredibly richer. It’s just that it’s more pointed here.”

There is precedent for SF-centric plays in past Mime Troupe offerings. In fact, the company’s 1999 show, City For Sale, took on the housing crisis of the last real estate and dot-com bubble. But Sullivan says the issue has also changed. “This show, while it touches on [housing], is much more about a change in the culture of the city. Not just what does it mean to be living in San Francisco, but what is San Francisco now?”

Ripple Effect is a departure in some other ways too. It’s a more concentrated drama, less concerned with a particular impending disaster to push the plot than in the precise relationship between the main characters. “In this show the dilemma is, to a large extent, how the characters see each other,” notes Sullivan. To this end, Sullivan, head writer for the collective since 2000, shared the writing this time around with Bay Area playwrights Eugenie Chan and Tanya Shaffer, each of whom explored specific aspects of the characters’ back stories. The show also sports two directors (Hugo E. Carbajal and Wilma Bonet) and comes with a new musical team: composer-lyricist Ira Marlowe and musical director Michael Bello, who together fill roles covered in recent years by Pat Moran.

The Mime Troupe has not been immune to the financial upheaval shaking the city. Last year, the collective had to launch an emergency fundraising campaign called the Cost of Free to make up for a serious budget shortfall that jeopardized its ability to offer its annual show. Velina Brown, Sullivan’s life partner as well as fellow artist, explains that the 2008 economic downturn had reduced the offerings of arts foundations by as much as 40 percent. “Being already a really lean organization anyway, 40 percent going away is huge.” But where another theater might have folded up shop, the Mime Troupe, with help from its audience, bounced back.

“One of the things that’s helped us over the years with all these ups and downs is that we are a collective,” says Brown. “It’s not all on one or two people and if they feel like that’s it, then that’s it — there’s a larger group of people that have to agree that that’s it before the doors close. We also own our building, and that has definitely saved our behinds. We haven’t had to be at the mercy of a landlord — who says, “Hey, I could get 10 times what you people are paying” — and kicked to the curb.”

“Because we’re a collective it takes people a lot longer to get burned out,” agrees Sullivan. “Because we’re worker-owners of our company we are willing to put in more time, do things for a little less pay, come to meetings when we’re not paid to be there. We do get paid; it’s an [Actors] Equity company. But we have a sense of ownership you don’t get at other places, and that also helps the company in the most difficult times.” *

Through Sept. 1 at various NorCal venues