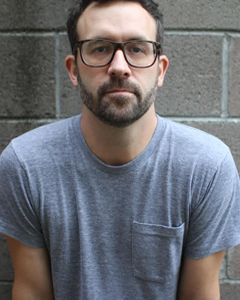 Smith Henderson is all smiles. His debut novel, Fourth of July Creek, has been receiving rave reviews since its release two weeks ago, has a 100,000 copy pressing from HarperCollins, and was recently called “the best book I’ve read so far this year” by Washington Post critic Ron Charles.

“I was not expecting the Ron Charles thing … that was amazing,” Henderson says, sipping his beer on the outdoor patio of Farley’s East in Oakland. (He’ll be reading from the book Tue/17 at San Francisco’s Book Passage.) While the degree of success that the book is receiving tickles Henderson, he doesn’t pretend to be shocked that people are enjoying his work. “When people tell me ‘I love your book,’ I’m happy, but not chagrined. I wrote the book toward my interests, so of course I like my book.” Henderson smokes a cigarette as he chuckles.

His novel explores the plight of Pete Snow, a Montana social worker who discovers a feral boy, Benjamin, and his survivalist father Jeremiah Pearl. While dealing with the dissolution of his own family, several other cases, and a tumultuous romance, Snow uncovers Pearl’s revolutionary ideas and begins to question his own safety and that of his entire community, the rural town of Tenmile. Henderson’s intertwining plot confronts a plethora of contemporary societal ailments, including alcoholism, suspicion of government, child neglect, cultural polarization, and the gift and curse of religion.

Much of our conversation concerned the intricate plot points that Henderson somehow manages to sew together seamlessly. Such a combination of topicality and technical flourish has led Charles and several other high-profile critics to throw around words like “Great American Novel,” meaning work consistent enough and broad enough in  political scope to say something profound and lasting about the nation.

Henderson isn’t one to label his own work, but he doesn’t entirely laugh off the potential hyperbole either. “I think it’s tricky to use words like ‘Great American Novel’ because it’s set in Montana — it’s a very white state. There’s a lack of diversity that I think is necessary in talking about the whole country.” After a moment of rumination, however, he offers a partial refutation of his own point. “That being said, the novels that come to mind are pretty regional as well; Beloved is pretty focused on a single location and group.”

While Montana might not be the optimal mirror for America, it’s a place that Henderson knows quite well. A native son, he grew up in the state and went to college, like Pete Snow, in Missoula. (He now lives in Portland, Ore.) “My whole family are cowboys and loggers. My dad is still a logger,” he says proudly. “Montana is a weird place … there’s a libertarian streak that is pretty unique in how it manifests itself.”

Henderson cites the 2004 election, in which Montana voted for George W. Bush, legalized medical marijuana, and constitutionally banned gay marriage all on the same ballot. The odd mix between “live free or die” and socially conservative practices in the state provided an ideal climate for the confrontation between Snow, a government employee with the Department of Family Services, and the fiercely anti-authority Pearl. The eventual escalation between the government and the community is easy to believe.

“Things are always liable to get a bit wacky and out of control up there,” says Henderson.

Yet Henderson, while by no means conservative or religious, isn’t trying to write a book about extreme zealots. “At first it’s possible to look at Pearl and think he’s completely insane. But a lot of his paranoia is not entirely unfounded.”

Near the end of the book, Pearl uses an example of government agencies  replenishing the Montana wolf population as an example of how dangerous Federalism can become. “Pearl basically suggests, ‘You may think your wolves are pretty, but they are liable to eat me.’ That lack of practicality is real.”

While Henderson set Fourth of July Creek in the early 1980s, he was inspired by the rhetoric going on in national politics today. “Arguments like those of Pearl’s are all over the place right now, and initially they may seem just as paranoid. But when you have unmitigated drone strikes and NSA surveillance it isn’t impossible to see where people are coming from.”

He does, however, see the value of government intervention — Helena pays his ultimately heroic (or at least likeably anti-heroic) protagonist, after all. “On the other hand, you have health care, gay rights, the environment, all receiving meaningful support.”

Though informed and interested in the modern state of affairs, Henderson was very intentional in his chronological setting of the book. He leans forward and takes on a quieter, more intense tone as he talks about the era directly succeeding Carter’s economic and military failures. “1980 was an inflection point. Obviously Carter, while getting a lot right, struggled a ton in the implementation. And the backlash to that, coming in the form of the Reagan Revolution, has really defined modern society … We learned how to make wealth out of thin air — at least for some people.”

Reagan’s election and the surrounding rhetoric takes center stage in the book. Judge Dyson, an aging and alcoholic Democrat, openly weeps as he watches the election results with Snow. “It was the death of the LBJ, rural-big-government Democrat. And that’s something I’m not sure we’ll ever get back.”

In addition to highlighting the philosophical shifts that have led to the urbanization of liberal thought, Henderson also uses the relatively unorganized pre-digital bureaucracy as a major plot device. “There was no concept of secondary trauma in 1980 Montana. There was no social worker to help Pete deal with the horrific things that he sees on a daily basis.”

The dearth of support systems fuel Snow’s drinking bouts, depression, and difficulty in handling his daughter’s disappearance and ex-wife’s instability; he may be a great social worker, but the state’s inability to track his emotional progress and casework eats away at his life.

A fascinating storyteller and political force, Henderson is also often  technically experimental. The portion of the book that details Snow’s daughter’s descent is done in the form of an anonymous question and answer. “When I write, I almost always write questions to myself: ‘Where is Pete Snow from?’ ‘Choteau.’ ‘Why Choteau?’ For the Rachel section, I just left it in that form.”

But the section is far from unfinished. Henderson left the section as is because of the intensity of its content — in a pure third-person narrative it felt too stilted. “The voices are full of an anxiety and intensity that couldn’t be captured with the more impartial voice in the rest of the book.”

The frenetic 90 minutes that we spent discussing Fourth of July Creek further convinced me that the book cannot be distilled to one message, but is rather a varied rumination on insecurity, suspicion, and government. When I asked Henderson what he thinks the primary takeaway is, however, he was remarkably candid and quick in his response. He pointed me to the Thoreau quotation that opens the book: “If I knew for a certainty that a man was coming to my house with the conscious design of doing me good, I should run for my life.”

Henderson then highlighted a passage in which Snow is likened to a priest for how much he gives up to help dysfunctional families. “America in the ‘80s was losing trust for institutions, and continues to. Despite all of his flaws, Pete is worthy of our trust, and hopefully represents a powerful refutation of Thoreau’s instant suspicion for government or those who come to help us.”

Henderson’s creation, while transcending political ideology, powerfully shows the potential for altruism even in a country as broken as the US.