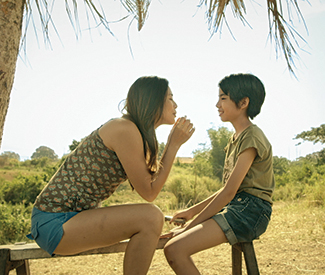 FILM We’re neck-deep in local film festival season right now — which, yeah, is kind of 12 months out of the year around here, but the SF Silent Film and Green Film festivals just ended, DocFest is underway, and Frameline starts June 19 — but there are plenty of reasons to carve out time for Yerba Buena Center for the Arts’ outstanding New Filipino Cinema mini-fest this weekend.

A big one is opening-night selection How to Disappear Completely; director Raya Martin, a bright light in the Philippines’ burgeoning indie film scene, will appear in person at the screening. This is a good thing, since Disappear is a bit of a head-scratcher, but in a commendable way — part coming-of-age drama, part dreamy puzzle, part old-school exploitation flick (I can’t be the only viewer who sees Martin’s shot of someone pawing through a pot full of intestines and immediately thinks of Herschell Gordon Lewis). Martin told the Philippine Star that Disappear was partially inspired by 1980s American horror filmmakers like Wes Craven, and there are fragments of 1984’s Nightmare on Elm Street lurking in this tale of a troubled tomboy (Ness Roque) whose vibrations of high-tension fear conjure a sinister spirit only she can see. This, on top of threats both natural — her island home is dark and lush, with nature’s stormy menace permeating every frame — and domestic: “You think the road home is safe? No one will hear you when you scream,” snarls her mother, who has a bit of Carrie White’s Bible-thumping mama in her.

Mom’s not even the biggest issue, though — that’d be the girl’s drunk, leering father (Noni Buencamino, one of the country’s most acclaimed actors — along with his wife, Shamaine Buencamino, who plays his wife in Disappear), who lurches around with a loaded shotgun and spends all his money betting on cockfights. Aside from its more experimental sequences, which are set to a buzzing electronic soundtrack (and thankfully, no Radiohead), Disappear‘s deliberately loose narrative pivots around strained dinner-table conversations among this dangerously dysfunctional family. Most of the longer passages of dialogue take the form of recitations: Bible stories (Lot and his daughters get a thematically appropriate shout out); folklore (a surprisingly funny tale involving a royal chicken); and a school recital on Filipino history, in which the young heroine plays a gun and her classmates, portraying vengeful villagers, warn the parent-filled audience: “We are going to hunt you down!”

Disappear‘s title card appears a full hour in, or nearly at the end of this 79-minute tale; it’s a blazing beacon in a film otherwise dominated by water imagery. Things only get bleaker, more surreal, and more shockingly violent from there. “If you’re wondering why we’re making such a fuss about new Filipino cinema, this is a great place to start,” explain series co-programmers Joel Shepard and Philbert Ortiz Dy in their program notes.

A far sunnier view of youth in the Philippines emerges in Sigrid Andrea P. Bernardo’s Anita’s Last Cha-Cha, also about a tomboy, whose coming-of-age through first love begs the question why this film isn’t called Anita’s First Cha-Cha instead. Anita is 12 and not ready to embrace puberty, despite her widowed mother’s best efforts to dress her up like a princess for the community’s annual fertility festival. This all changes when she catches sight of long-limbed lovely Pilar, the former town beauty who’s returned after a stint studying physical therapy abroad. As Pilar sets up a massage practice in her house (not surprisingly, the local men line up for appointments), Anita begins spending all of her time daydreaming about the older woman.

Of course, her fantasy girlfriend — who has a tortured romantic past with Anita’s age-appropriate male cousin — is just that, and the two become allies as the story takes a melodramatic turn. Writer-director Bernardo will attend the screening in person to discuss her feature debut.

Probably the most high-profile entry in the YBCA series is Sean Ellis’ urban thriller Metro Manila, which won an Audience Award at the 2013 Sundance Film Festival, as well as the top prize at that year’s British Independent Film Awards. Ellis is a Brit, but Metro Manila is acted (splendidly) by an all-Filipino cast. After a meager harvest, naïve farmer Oscar (Jake Macapagal) convinces his wife, Mai (Althea Vega), to move with their small children to the big city in search of work. But the grimy metropolis proves a dangerous place, and what’s essentially a predictable tale of country-bumpkin-learns-a-hard-lesson-on-the-mean-streets is elevated by a ruthlessly desperate tone and a killer performance by John Arcilla (as Oscar’s shifty new co-worker). Even better: a couple of clever last-act twists that shake up the story’s seemingly inevitable arc.

These three films are just a surface glimpse of what New Filipino Cinema has in store. Closing night’s screening of Brillante Mendoza’s Thy Womb, starring veteran superstar Nora Aunor, is already sold out, but fret not: The film, the much-praised latest from the director of 2009’s controversial Kinatay, returns to the YBCA for its own engagement June 26-29. Also screening post-fest is Lav Diaz’s acclaimed Norte, The End of History (June 19-20), a 250-minute epic inspired by Crime and Punishment. *