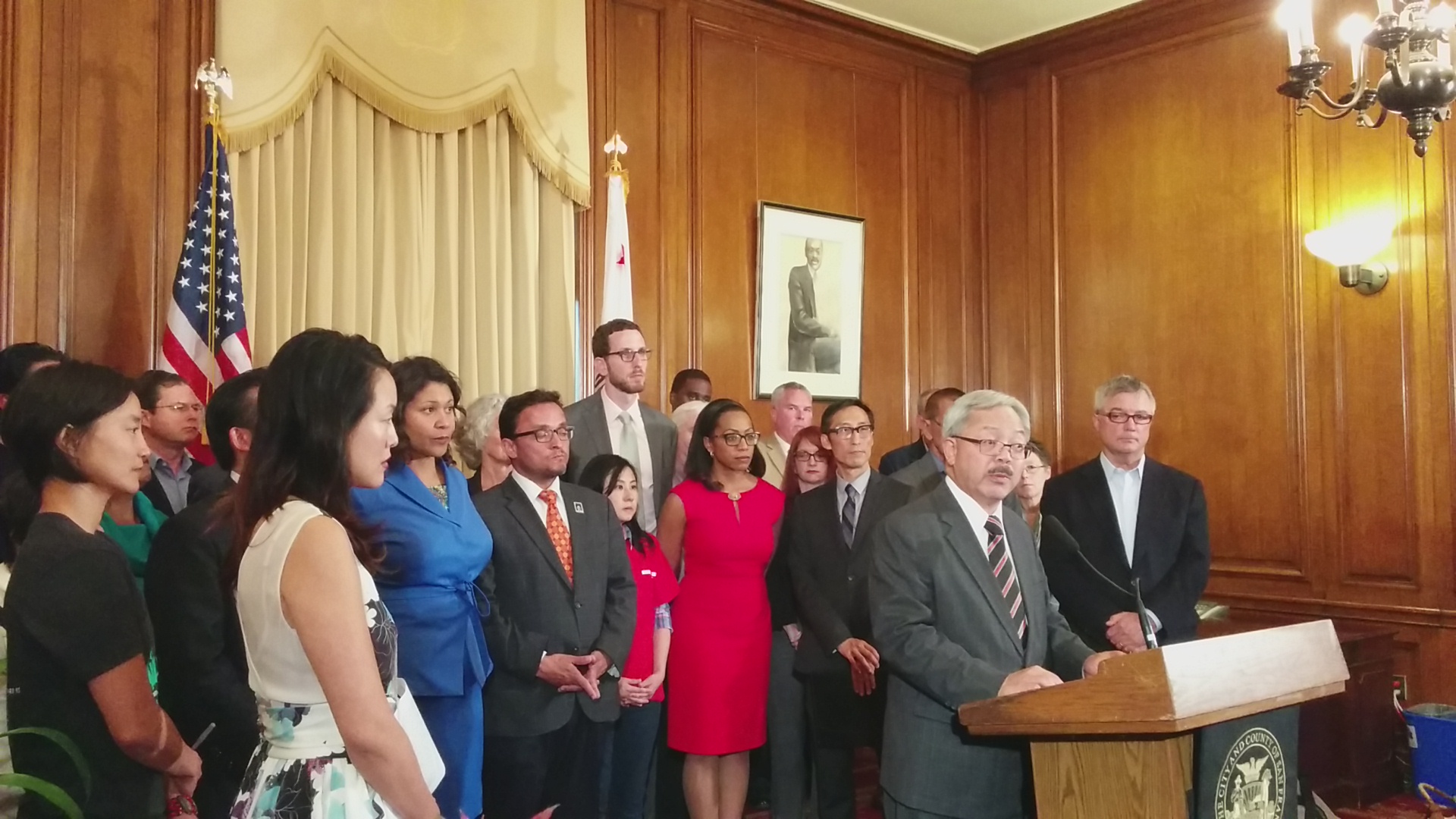 San Francisco bears the unfortunate distinction of having the fastest-growing income inequality nationwide. At the same time, the city may retain its more progressive status as having the highest nationwide minimum wage — if voters approve a November ballot measure unveiled today by Mayor Ed Lee and 10 members of the Board of Supervisors.

The consensus measure would increase the minimum wage for all San Francisco employees to $15 an hour by 2018. Currently, the city’s lowest-paid workers earn $10.74 per hour under the existing minimum wage ordinance.

Crafted by representatives from labor, business, and the nonprofit sector in conjunction with Mayor Lee and Sup. Jane Kim, this November ballot measure proposal is less ambitious than an earlier minimum wage increase floated by the Campaign for a Fair Economy, although both guarantee workers an eventual $15 an hour.

The earlier proposal, backed by a coalition that included city employee union SEIU Local 1021, the Progressive Worker’s Alliance, San Francisco Rising, and other progressive organizations, sought to increase the minimum wage to $13 an hour by 2015, $14 by 2016, and $15 by 2017.

So at the end of the day, the newly unveiled consensus proposal would leave minimum wage earners with $0.75 less per hour in 2015 and $1 less in 2017 than what the Campaign for a Fair Economy originally called for, but the broader support for this measure might mean brighter prospects for lowest-paid workers in the long run. The consensus proposal also eliminates the idea of an enforcement committee tasked with holding employers to the mandatory wage increases, yet continues to allocate resources for this purpose.

Shaw San Liu of the Campaign for a Fair Economy, who was part of the negotiations for the consensus measure, noted that this piece was especially important: “It is meaningless to raise the minimum wage if they’re not going to enforce it,” she said. The Office of Labor Standards and Enforcement, tasked with upholding the minimum wage, is currently experiencing a backlog due to case volume.

Shaw San Liu speaks about the importance of the proposed wage increase.

Moderates’ strong opposition to the more ambitious wage increase posed the threat of having two competing measures going to voters in November. Now that a single unified measure is headed to the ballot, there may be less of a risk that workers will end up with an inadequate increase or none at all.

The across-the-board increase to $15 an hour makes this a stronger proposal than a similar wage increase moving forward in Seattle, although that city has a lower cost of living than San Francisco, so the wage will stretch a lot farther. San Francisco has a notoriously high cost of living; former Mayor Willie Brown once famously quipped that anyone earning less than $50,000 simply shouldn’t try to live in the city, and rents were much lower then. Under this proposal, minimum wage workers can hope to earn $31,200 before taxes by 2018, with wages continuing up from there in correlation with Consumer Price Index adjustments.

The San Francisco Chamber of Commerce was adamantly opposed to the earlier ballot measure proposal, but is now on board. “We think that with consensus built up around this measure, which residents will be voting on, we’ve reached that compromise,” Wade Rose, co-chair of the Public Policy Committee of the SFCOC, said at the press event.

However, the SFCOC played a minimum role in the negotiations, with the key players being labor leader Mike Casey, Liu of the Progressive Workers Alliance, Sup. Kim and her staff, and Mayor Lee and his staff, with input from a variety of minimum wage earners, employers, and other stakeholders.

Kim called the measure “the most progressive and strongest minimum wage proposal in the country,” and later clarified that unlike a similar proposal in Seattle, this measure guarantees a $15 wage across the board regardless of business size or additional benefits. “There will be no tip credit or health care credit – this will be pure wages that San Francisco workers will be bringing home to their families,” Kim said. “Despite setting a successful precedent in 2003, which set the highest minimum wage in the country then, in the last years in particular we’ve been seeing a widening income gap between our lowest paid workers and our highest paid workers. In times of economic prosperity, no one should be left behind.”

“We’ve heard input from all of the different affected sectors of our community – earners, and people who pay the minimum wage, we’ve heard from nonprofits as well as small businesses and large businesses,” Mayor Lee said at a June 10 press conference. “And today, with the current minimum wage at $10.74, there’s been an across the board agreement that that just doesn’t cut it; that’s not enough.”

Lee emphasized that with the unveiling of the consensus proposal, “there are no two measures. There is one measure,” destined for the November ballot. He added that in the course of negotiations between opposing sides, “there was reality that needed to be checked in on all sides.”