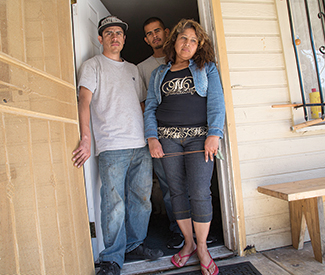 “I first applied for a job at the Select agency in 2000. A lot of people had told me that this job was really bad. At first they put me on the cardboard line. That didn’t seem so bad because it’s not so dirty. It’s just that the cardboard stacks up so fast. But then they put me on the trash line, which was a lot dirtier. But the thing is, I needed the job. So I worked hard, and the years passed, and I was still there.

“The worst position — the one with the heaviest and dirtiest work — is the trash line. All the really terrible things are there. Things like dirty diapers. There are dangers too. Broken glass. Rusty iron.

“I got punctured twice by hypodermic needles, and they sent me to the hospital. I was really scared. You could get HIV. They kept checking my blood at a clinic in Castro Valley for eight months afterwards, for AIDS or hepatitis or other illnesses.

“Afterwards, the agency said the company had checked my papers and found out that they weren’t any good. I wouldn’t be able to work anymore if I couldn’t give them new papers within a month. I told her I wanted to see this in writing, and I’d take it to a lawyer before I signed anything. I told her, ‘With the lousy wages you’re paying us, do you think you’re going to find people with good Social Security numbers?’

“After the month was up they didn’t say anything. I knew three people after that who were called into the office after they’d been punctured by a needle, and the company then checked their papers. But they lost their jobs, because they didn’t speak up the way I did.

“Once I was sorting on the line and a heavy piece of equipment fell on me. It really hurt me bad, but they didn’t pay me anything for that or send me to the doctor. Last November I slipped and fell while I was putting a cylinder on the forklift, and it hit me in the stomach. They didn’t do anything for me that time either.

“We don’t have any medical insurance. No vacations. Nothing. They call us temporary workers … but we’re not really temporary. Many of us have been working at ACI for many years.

“When I started at ACI they were paying me $8 an hour. They made us work 10 or 12 hours every day, standing in one place. If we got sick and asked for time off they’d deny it. Every Saturday was mandatory. If we went to the bathroom, they’d look at their watch to see how much time we were taking.

“Then in 2012 they started two shifts and raised the wages to $8.50 for nights and $8.30 for days. I don’t think that’s a fair wage. In one safety meeting I asked them to give us a raise. Then the manager yelled at me … Afterwards he told me I had to go apologize in the office.

“Once a woman said we’d go on strike and Brenda, the manager, said we’d all be fired if we did.

“Then they decided to motivate us by giving us clocks as presents, but they didn’t work. When I asked why they’d give us broken clocks the company was insulted, but I see better stuff in the trash.

“We never knew that San Leandro had a living wage law. We learned about it when we talked with the union organizer, Agustin. We decided to file a court case to force them to raise the wages.

“Then in February they began calling us in to say they’d started checking our papers. When I asked a manager why, she said it was partly because we’d sued the company and partly because the company had been audited by la migra [immigration authorities]. People have worked here for 14 or 15 years, and no one ever said anything to them before. Now that we filed the suit, we’re getting fired.

“Since I got fired, I’ve been very worried about my situation. I can’t get hired and my sons lost their jobs in Los Angeles and came up to live with me. My PG&E bill is very high, $258. The water bill came — $239. The rent is $1,250. We’re all living in one room and renting out the others just to be able to pay it.

“I’ve been here 14 years, and it’s impossible for me to go back to Apatzingan, in Michoacan, where I was born. I may not have a job right now, but I don’t regret anything. I’m going to struggle, and continue moving ahead.”

Editors’ note: Cristina Lopez’ name has been changed to protect her identity