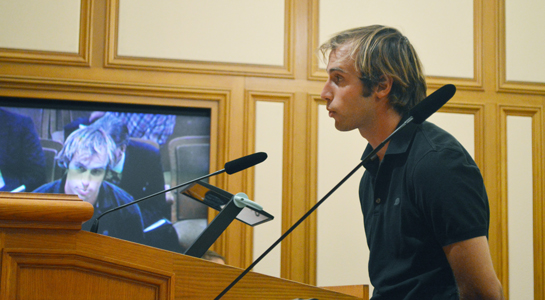 In a win for government transparency, a slew of strong new appointments for a city government watchdog group cleared their first round of approvals yesterday.

Society of Professional Journalists appointees Mark Rumold and Ali Winston, League of Women Voters appointee Allyson Washburn, and Attorney Lee Hepner were confirmed by the rules committee as appointments to the Sunshine Ordinance Task Force. That recommendation is now headed to the full Board of Supervisors for approval.

The Sunshine Ordinance Task Force was formed in the ’90s, and tasked with policing transparency laws granting interested citizens (and journalists) access to government records. Emails, policy documents, and research are all openly accessible to the public under the city’s Sunshine Ordinance — but someone has to make sure city government plays by the rules. That’s where the task force comes in.

But the group has long drawn fire from the supervisors.

Supervisors have blocked SPJ appointments to the task force before, stemming from a political skirmish dating back to 2011, when the task force found the Board of Supervisors to be in violation of the Sunshine Ordinance after Board President David Chiu introduced amendments to a developer’s agreement for the Parkmerced redevelopment project. The SOTF found the Board’s action to be in violation of transparency laws; certain members of the board, in turn, accused the SOTF of going rogue.

That led to an impasse lasting more than two years, leading Bay Guardian founder and former publisher Bruce Brugmann to brand the Board the “anti-Sunshine Gang.” Brugmann alleged the good work of the task force earned it a slap by city officials, who fear it.

That slap manifested in long-delays of new appointments.

.@SFBG founder Bruce Brugmann gets up at rules committee and says “WTF GUYZ?!”* *not actual quote, but close enough. pic.twitter.com/1hpbwBsFj1

“That prevents the task force from doing the job it was supposed to do,” Liz Enochs, immediate past-president of the SPJ told the committee yesterday.

We’ve covered the history in prior posts. One of Brugmann’s anti-Sunshine Gang, Supervisor Scott Wiener, was an ardent opponent of the task force. Some said his disapproval played a role in the Rules Committee blocking new appointees at their last meeting.

But that was before Wiener actually met the SPJ candidates: Rumold, an open government attorney with the Electronic Frontier Foundation and Ali Winston, a local investigative reporter of much renown. After sitting down with the pair, Wiener changed his tune.

“In the past, the task force has been highly dysfunctional and ineffective,” Wiener told the Guardian. But now, “the candidates I met with appear to have the big picture in mind — focusing on improving transparency — and I’m optimistic about the leadership role they can play in making the task force an effective and respected governmental body.”

The new appointees were initially blocked during the last rules committee as Supervisors Katy Tang and Norman Yee asked for a stronger showing of diversity among the candidates.

That caused rumblings among local journalists, who know Winston is of Middle Eastern descent. He asserted this to the rules committee yesterday.

“I want the committee to know my mother is [Turkish], my family is throughout eastern Europe and the Middle East,” he said. “I’m very cogniscent of Middle Eastern and Muslim concerns in San Francisco.”

Sup. Yee interrupted, saying with a smile, “I can relate to you!”

That brought some laughs, a far cry from the usual tone when discussing appointments to the task force. But one final sticking point remained: a delay in the appointment of Bruce Wolfe, a local politico and board member of the Haight Ashbury Neighborhood Council. That leaves Bruce Oka still in his task force seat, though he’s long said he wants out.

Chris Hyland and Josh Wolf were also recommended by the Rules Committee. Interestingly, insiders say it’s still an open question if Wiener will move to block their appointments.

Sticking points aside, these six candidates now have a clearer path for approval by the Board of Supervisors. Maybe soon the sun will shine a bit brighter in City Hall.