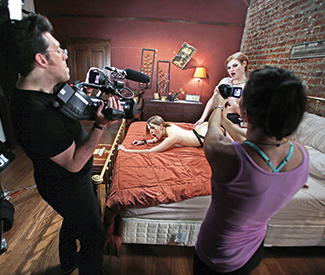 The spotlights shone down, the athletes tussled, and the crowd screamed.

The toned and tattooed female wrestler tackled the topless, tanned, blond wrestler from behind, pulling her down like a tumbling tower. The mat thumped. Cheers erupted. In a sudden reversal, the tanned wrestler gained leverage with her right arm and slammed the tattooed fighter’s shoulders onto the mat, giving the blond the win.

What happened next was definitely not standard wrestling fare.

“We can’t do business under those circumstances,” Acworth told us. “We can’t make a product that can compete.”

Assemblymember Isadore Hall (D-Los Angeles), sponsored the bill, and the day it cleared committee he was triumphant.

“For too long, the adult film industry has thrived on a business model that exploits its workers and puts profit over workplace safety,” Hall said in a press statement. “The fact is, adult film actors are employees, like any other employee for any other business in the state. A minimum level of safety in the workplace should not have to be negotiated.”

In the early 1990’s, the federal Occupational Safety and Health Administration adopted a bloodborne pathogens regulation, and DOSH adopted a similar regulation soon after. DOSH’s standard requires employers to take measures to prevent employees’ eyes, skin, and mucous membranes from coming in contact with blood and “other potentially infectious materials,” including semen and vaginal secretions.

“In 2004, there was a big (HIV) outbreak in the industry,” Eugene Murphy, senior safety engineer at DOSH, told the Guardian. “It was demonstrated HIV was clearly contracted on set.”

“I attempted to run the business as condom mandatory for about a year,” Acworth told us. He even pronounced their necessity in an interview on CNN. But there were complications.

“I was talking to a girl about it and she was like, ‘Dude, I’m in pain everyday and constantly swollen,'” he told Nerve. “Condoms are intended to be used on an average-sized penis for average sex, and we have entertainment sex, for anywhere from 20 minutes to four hours.”

The condom effort tanked at Kink. Acworth said he withdrew the policy after listening to his performers’ wishes. The studio does adhere to 14-day HIV tests, and condoms are available in a “double-blind” agreement, by which actors can purportedly safely ask for condoms and not fear retaliation.

Despite those efforts, Kink was later awash in condom controversy. Earlier this year, DOSH fined Kink $78,000 in violations connected with the alleged on-stage HIV infections of two actors in 2013, one of whom alleged that a shoot continued despite one actor having a bleeding cut on his penis.

Acworth adamantly asserts the HIV transmission happened in these actors’ personal lives, and says the issue is used as a wedge by the AIDS Healthcare Foundation to push a political agenda. The Guardian attempted to contact the foundation but did not hear back by press time.

Regardless, Murphy said, DOSH is pursuing regulatory requirements around bloodborne pathogens at Kink, and the enforcement of those regulations is not tied to the whether the initial HIV infection case was verified or not.

“My concern,” Murphy said, “is whether there is a healthy and safe workplace.”

Acworth came to San Francisco for the reasons many do: he wanted a place to be weird, or in his case, kinky.

“San Francisco,” Acworth said, sitting across from us in a leather bondage chair, “appeared to be more geared up.”

The vast, arch-roofed space was outfitted with modern sound proofing for the benefits of performers and neighbors, but its life as a performance space is not new. In the 1920s, boxers traded blows under its lights, and history may repeat itself, Armor Community Center Sales Manager Quincy Krashna told us.

He’s in talks with Golden Boy Promotions (boxer Oscar De La Hoya’s company) to bring prize fighting back to this historic space. In recent months, the Drill Court played host to a massive New Year’s Eve party, a Game of Thrones-themed dance night and cancer fundraiser, and even an evangelical medical conference, where missionaries offered free dental and doctor checkups to the public.

“The Holy Spirit was truly present at this event,” a doctor from the program, Building Bridges, wrote on the program’s website.

Even bigger changes could be in store. Last month, Acworth filed an application with the city to convert most of the historic Armory into office space, what he called a “last ditch” plan in case the state condom ban passes and Kink decamps for Nevada.

“This move represents an insurance policy,” he told us.

In a public May 11 letter to Weinstein of the AIDS Healthcare Foundation, Acworth asked the foundation for a truce: “I am reaching out to you and AHF, in the hopes of a day where we may sit across the table from one another and agree on common goals and strategy on protecting performers as opposed to continuing this battle.”

As he notes in his letter, if pornographers lose this battle, the companies may relocate. If Acworth finds himself uncomfortably bound and gagged by new regulations, his safe word may be: Nevada.