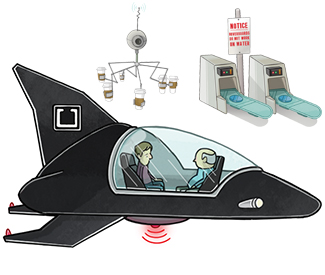 Transit of today is looking more futuristic every day. From Google Buses that look like UFOs to driverless Uber cars, the future really is now. But what will the actual future of transit have in store for San Francisco? Will the gadget-obsessed disruptions of the future abandon our congested streets? Most importantly: In the future, how will I get my favorite coffee?!

The real-life Amazon will soon deliver by drone, but why would companies stop there? Coffee drones would let fog-laden western ‘hoods, or techies trapped in cubicles everywhere, taste their hipster coffee concoction of choice without having to interact with people. And thanks to a splash of surveillance with your java, these drones will anticipate your next delivery need, too!

Uber recently announced purchasing 2,500 Google driverless cars, but in a hundred years they’ll undoubtedly trade those in for driverless – and street traficless – hovercrafts. We trust our robot overlords to fly us home safe from our latest drunken escapade in SoMa, right?

SF Citi Bikeshare is so 21st century. The 22nd century will undoubtedly give rise to Citi Hovershare. Just remember McFly, those boards don’t work on water. (Unless you’ve got POWER!)

No matter what, don’t tell tech employees of the 22nd century their floating commuter Orb (invisible to protesters) resembles a Death Star. They’ll cry ‘TECH PREJUDICE!’ and blow up Alderaan just to spite you.

Every time a rider flocks to private transit, one less person gives a damn about funding Muni. By the 22nd century “the people’s transit” will be held together with spit, tape, and carefully arranged bandages. Like today… but even worse.