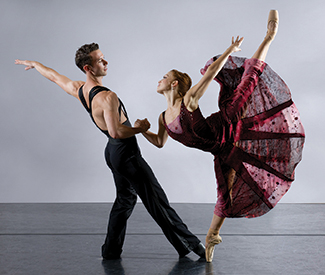 DANCE With world premieres by Amy Seiwert and Val Caniparoli, and the late Michael Smuin’s affectionate tribute to George Gershwin, Smuin Ballet closed its 20th anniversary season with fine choreography, good music, excellent performances, and, most of all, an intelligent perspective of what ballet in the 21st century has to offer. Today Smuin is a thoroughly contemporary troupe with a promising vision of what it wants to be.

Caniparoli set his full ensemble piece, Tutto Eccetto il Lavandino (everything but the kitchen sink), to a number of Vivaldi scores, including at least one for pipe organ. The work is accurately named. The emotional range slithered between goofy and poignant, refined and raucous. At times, the attempts to be clever and amusing at all costs could have been a little more restrained. But as a whole, the variety of approaches Caniparoli took made for an appealing new work.

Still a character dancer with the San Francisco Ballet despite his 30 years of experience choreographing all over the country, Caniparoli created a lively, unpretentious romp for 16 dancers, balancing smaller, more emotionally-flavored sections with full ensemble numbers. Unlike other contemporary ballet choreographers, who seem to feel that the toe shoe is hopelessly passé, Caniparoli put his women on point. They were completely at ease engaging in his more complex approach to working feet.

Some of the gestural language — stepping through a ring created by arms, crawling between legs, covering ears, torso shakes, flailing arms — looked like movie silliness, but mostly still charmed because everything grew so clearly out of the music.

Caniparoli has a nuanced touch with duets and trios. He also takes full advantage of today’s athletically trained dancers; the women are lifted, slid, and turned over and upside down in every way. The ever-shifting relationship between Terez Dean, Aidan DeYoung, and Weston Krukow felt congenial. More romantic was the duet for the long-limbed and beautifully matched Jane Rehm and Joshua Reynolds. Another, for Ben Needham-Wood and Christian Squires, initially seemed contentious, but ended by looking toward a possibly common future.

Seiwert’s But Now I Must Rest is an exquisite and embracing tribute to the late Cape Verde singer Cesária Évora. It is a work in which Seiwert takes a more theatrical dramatic approach to dance making than usual. But Now is a beautifully realized piece of choreography, performed by dancers in tune with Seiwert’s vision. It showcases the very fine Susan Roemer, one of Smuin’s longtime dancers, in the role of the “barefoot diva” who, by choosing to perform without shoes, paid tribute to the millions of women who cannot afford them. The solicitous Reynolds partnered her sometimes lovingly, sometimes just by holding her up. He seemed a friend, a lover, a guide.

Using as raw material gestures and movements from Évora’s performances — researched with the help of dancer Katherine Wells — Seiwert created wave after wave of lush and sensuous dancing that flooded the stage. Sometimes it enveloped Roemer and Reynolds; sometimes it served as a foil, much the way backup musicians might function; and sometimes the dancers embraced each other as a community. And everything was performed to those lilting beats and rocking rhythms.

A lightly skipping trio (Dean, Jonathan Dummar and Krukow) streaking across the stage suggested happier times, but Christian Squires’ ashen solo dragged him down with grief. It was a risk to actually have him weep, but he brought it off.

The production values were excellent. Sandra Woodall’s earth-toned costumes, with bustiers for the women and, for everyone, floor-length skirts with slits to the hip, allowed for freedom of movement and highlighted working legs. Brian Jones’ azure lighting suggested a view one might glimpse, gazing out from an island.

The excerpts from Smuin’s full-evening Dancin’ with Gershwin threw a spotlight on a man of the theater, at home in ballet but also in love with Broadway. When he created the work in 2001, Smuin commissioned the still impressive costumes from the excellent Willa Kim; lighting from Sara Linnie Slocum; and serviceable sets by Rick Goodwin. Dancin’ opened with video posters from the shows by the redoubtable Gershwins; they elicited both sighs and cheers from the audience.

It’s a rare company that offers its performers opportunities in ballroom, ballet, tap, jazz, modern, and show dancing. Smuin’s troupe took to the challenge with obvious glee. Erin Yarbrough swooned and triumphed with Krukow. Supported by guys with strippers’ fans, Erica Felsch relished being the vamp, though she was no competition to Marilyn Monroe. A poignant Rehm’s pained but resilient “Summertime,” as sung by Peter Gabriel, recalled the whole of the composer’s glorious Porgy and Bess. With Shannon Hurlbut, still a respectable tapper, at the helm, the dancers click-clacked through the final “Shall We Dance.” If that was a question, the answer was a resounding “Yes!” *