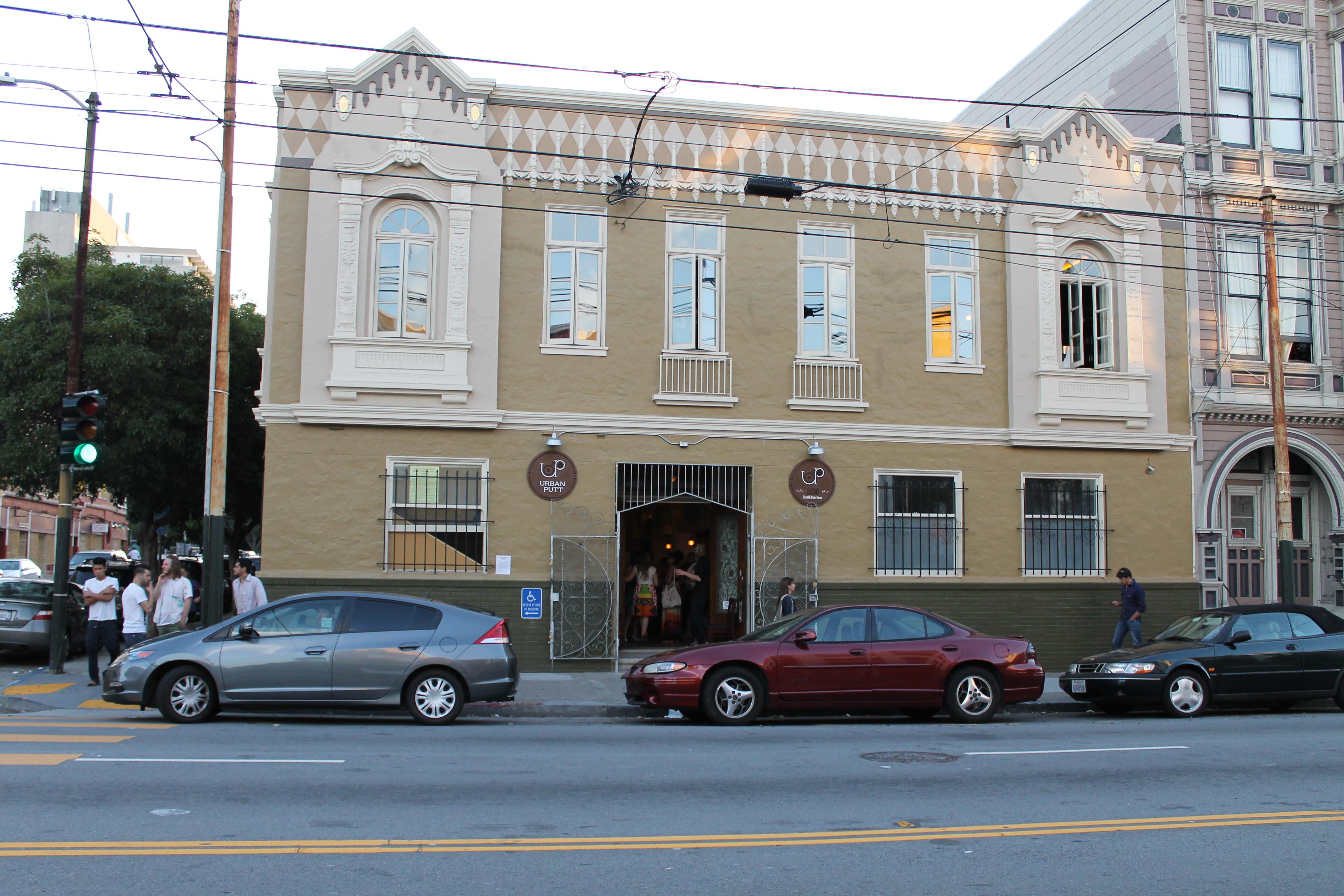 After a sneak peek and a couple of delays, Urban Putt finally opens at 4pm today. The high concept mini-golf course, restaurant, and bar combination arrives just in time for some Cinco de Drinko fiesta time.

The former mortuary at South Van Ness and 22nd Streets is freshly coated with a new paint job that seamlessly blends with the neighborhood. There’s nothing flashy about Urban Putt from the outside but as you step inside, you’re transported into a gadgety, steampunk world — a techie’s Disneyland.

The elaborate 14-hole golf course designed by the guys behind Mission Bowling Club can hold 40 golfers at a time, so expect a wait list as long as Nopa’s on a Friday night. Golfers start out at the Earthquake Hole where they navigate around Lotta’s Fountain and moving buildings into a fire hydrant hole. Expect kitschy San Francisco references scattered around the course: a Transamerica windmill, the Day of the Dead hole, and a robot hole built by the people from Make Magazine. Several other of our city’s landmarks also make an appearance.

While it’s a tad cramped, the course’s beauty remains in the details. A lot of the course was built by Urban Putt’s in-house 3-D printing machine. With custom ironwork, wood designs, and digital features, there are many surprises! At the Music Hole, the golf ball is lifted 10 feet in the air and dropped down an elaborate chute bouncing on drums, tambourines, and xylophones before making its way back onto the turf. In the left corner is a dark room resembling something out of Jules Verne’s 20,000 Leagues Under the Sea. The two-hole underwater course includes an LED-lit floor, a moving octopus, and an interactive submarine decked out in bells and whistles, levers, and buttons.

If mini-golf isn’t for you, the building’s second floor is entirely dedicated to a different kind of sport: eating and drinking. The full bar and restaurant UP @ Urban Putt is run by chef Dane Boryta, formerly of Bottle Cap. The restaurant will serve up traditional Americana dishes that include burgers, pizza, salads, and desserts — basically what you’d find at any mini-golf course. Guests can eat at communal wooden picnic tables or private high tables. Other upstairs divertissements include skee ball and Caddyshack on repeat. Expect weekend brunch offerings in the near future, because what new restaurant is complete without the city’s favorite weekend pasttime?

Urban Putt is basically every eight-year-old’s birthday party dream. Pizza, ice cream, mini golf … what more can a kid ask for? Moreover, later in the night, adults can have their own fun. No one under 21 will be admitted onto the course after 8pm. While the restaurant stops serving food at 11pm on weekends, drinking and golfing is available until 2am, and putters can sip drinks designed by the Bon Vivants — strong and tasty enough to decrease your chances of getting a hole in one. Pro-tip: the Duck Shooting hole is exceptionally difficult to master, even while sober. Fore!