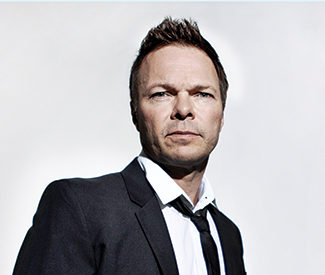 SUPER EGO “People shouldn’t actually call me sir,” Pete Tong says over the phone, that legendary radio voice of his immediately springing 21 glorious years of BBC Radio 1 Essential Mixes up in my mind. “I was recently awarded an MBE, which is a big honor, being recognized as a distinguished individual in the UK. I’m pretty sure it’s the first time someone from the electronic dance community’s gotten it. But it’s not a knighthood. I didn’t have to kneel before Her Majesty or anything.”

Two or three generations of dance music fans who grew up on his show might bow to that suggestion. Pete, who recently relocated to Los Angeles from London (“Why? Well, I’m speaking with you poolside”), and for the record can charm the pants off a telephone pole, is in a unique, possibly historic position right now. He’s a globally recognized and respected DJ and dance music advocate who can effortlessly straddle the pop-chart popular and the heady underground. And he’s arriving in America with a new nationally syndicated radio show (hear it here on KYLD, Sundays 11pm-midnight), just as our dance community seems the most divided it’s ever been.

“I look at the differences between the pop EDM scene and the more underground scene and I see opportunity. I’m a glass-half-full kind of person. But it’s already been five years since David Guetta had that big hit and people like Deadmaus and Skrillex began to break. Now’s when we start seeing if they’ve paved the way for ambitious acts with a different sound, like Disclosure and Rudimental, to break through on that scale. It’s very exciting. Maybe I’m optimistic, but I see a second wave breaking that can include the best of both worlds.”

That’s a refreshing viewpoint, and his recently announced All Gone to Sea cruise (www.allgonetosea.com), which somewhat disorientingly mixes the likes of Calvin Harris, Scuba, Steve Angello, and Jackmaster in its lineup, bears out his rosy outlook. As for his DJ sets, however — like the one Fri/2 at Public Works — he still lands firmly on the underground side: Check out his gorgeous April Mixmag Lab mix for a taste of what he brings to our shores.

“I absolutely love San Francisco. The history, especially when it comes to music, demands respect. You can’t dumb anything down when it comes to SF, there’s such a cultural heritage. Not that I won’t play banging tunes. But you like to think a bit on your feet, don’t you?”

ALL OF THE ABOVE

Your chance to check out wee, chic new club Mercer with some solid future bass and uptempo soul from DJ Bluz, King Most, Freddy Anzures, and Marky.

Before everyone slips down the glowing rabbit hole formerly known as the Detroit Electronic Music Festival, the As You Like It crew is lubing it up with ace techno players DVS1, John Osborne, and Keith Kamp.

If you tell me there is this incredible synth nerd recreating the beautifully mad ’70s sci-fi filmscapes of composers like Vangelis and Tangerine Dream, but dance-y, I will scream, “Where?!” and you will say, “At the monthly Push the Feeling party, duh.”

Motown on Mondays started out as a lark at Madrone Lounge — and now it’s spread its weekly magic to cities all over the country. Big ups to DJs Gordo Cabeza, Timoteo Gigante, and crew, blowing up this special bash with the Con Brio and Brass Magic bands.

Sheer organic audio wizardry from this “sonic house” pioneer, breaking dance music down to its atomic parts and rearranging them, via unexpected live instruments, into gorgeous prisms.