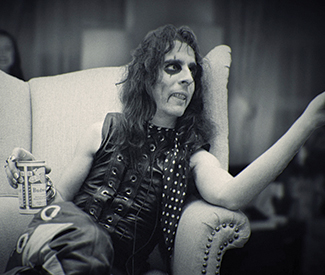 FILM Almost 10 years ago, a sprawling music doc entitled Metal: A Headbanger’s Journey kick-started the careers of Canadian filmmakers Sam Dunn and Scot McFadyen. Since 2005, the duo has worked on films about Rush, Iron Maiden, and Motorhead; they’ve also collaborated on a doc about Satan and will soon take on a project about “a very important heavy metal band who shall temporarily remain nameless.” Their current feature adds a third co-director, Reginald Harkema, for the colorful story of Alice Cooper, née Vincent Furnier, who’s as famous for songs like 1972’s “School’s Out” as he is for his horror-meets-vaudeville stage shtick.

Though Super Duper Alice Cooper retraces tales that will be familiar to anyone who’s read Cooper’s autobiographies or seen his Behind the Music episode, the directors tried to make the film as visually dynamic as possible, tapping old footage and animation and avoiding any talking heads. On the eve of the film’s premiere at the Tribeca Film Festival, and just ahead of its local screenings, I spoke to them about their approach.

Scot McFadyen We’d finished doing Rush: Beyond the Lighted Stage (2010), and we were at an awards ceremony in London, where we were approached by Shep [Gordon, Alice Cooper’s longtime manager] about doing a doc on Alice. We decided that we’d be into it if we could do it in this sort of “doc opera,” highly visual way without talking heads. We thought that would be a really fun challenge. He’s such a cultural icon — I think it’s important for people to realize how much effect he’s had since the early 1970s, and how much an influence he’s been as a pioneering shock rocker.

SFBG Can you elaborate on “doc opera”?

Reginald Harkema The idea came because Sam and Scot have cut their teeth on documentaries, whereas I come in from a feature-drama side. I said, why don’t we take the approach of mythologizing our character? Why don’t we take the usual documentary material — TV appearances and magazine spreads, concerts and photos — and marry it with a rock opera concept? And Alice’s music is perfect for that because he’s very self-referential. His music became the soundtrack to his own rock opera.

SFBG Cooper has been open about his past and this film doesn’t contain any shocking new revelations. How did you strategize around that?

SM Alice is such a showman. He does a lot of interviews, and we hear the same stories over and over. We did, like, 40 hours of interviews with him just trying to get him to go beyond the surface. And it was great to talk with [original Alice Cooper band bassist and Cooper childhood friend] Dennis Dunaway, because he was a big part of creating that character and bringing the band to life.

RH Also, when we were talking to Bernie Taupin, he wanted to tell the real story of his experiences with Alice, which involved cocaine and freebasing, which he felt a little bit guilty about bringing Alice into. And Alice has been very protective of that part of his past being revealed until now.

SFBG How did you choose your interview subjects?

RH We didn’t want to have any journalistic voices in the film, or anyone observing Alice from an analytical point of view. We treated it more like a drama, in the sense that people enter the story as Alice moves through his life. So obviously, Dennis at the outset, meeting Shep Gordon, and eventually we hear from Elton John, who was really blown away by his concert at the Hollywood Bowl. We really wanted to talk to the pivotal characters in terms of Alice’s development as an artist.

SFBG Coincidentally, the doc Supermensch: The Legend of Shep Gordon is also about to hit theaters. Have you seen it?

SM Yes! It’s funny, because you’ll see there are a couple of stories in there that are similar to our film — and what’s great is that they’re completely different in his doc than in Alice’s doc. It really shows you how everyone’s memories are affected from that period. By the end, [Supermensch] is much more about Shep and his life than about him and Alice, but there are some moments of crossover for sure.

SFBG Supermensch is directed by Mike Myers, which leads to the obvious question: why no Wayne’s World (1992) clips in your movie?

SM We’d seen the docs about Alice in the past, but it seemed like the most Shakespearean, dramatic moment of his life was when he stepped onstage sober. And that was in 1986. That was the point where this Jekyll and Hyde character was able to overcome his demons. Yeah, he went on and did “Poison” and had a number one hit with that, and then did Wayne’s World, but that was after the endpoint of our story.

SFBG Ending the movie in the 1980s also allows you to avoid going into Alice’s conservative political views.

RH He’s pretty apolitical, really — he’s a rich guy who lives in Arizona. He’s no Ted Nugent. But the goal of the story was to talk about how this kid, Vincent Furnier, transformed into the character of Alice Cooper. If you ask any performer, especially vocalists, they’ll tell you they go through some sort of transition before they go onstage. I think what makes Alice unique is that he becomes this character. And so while we didn’t necessarily want to touch on the political side of his life, we did want to show that this was a nice Christian kid from suburban Phoenix who became the godfather of shock rock. It was important to us to paint that picture. *