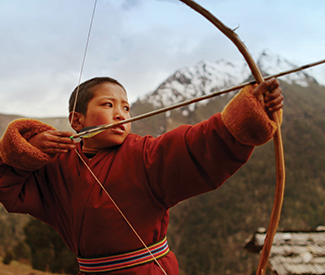 SFIFF “I’m the wrong kind of person to be really big and famous,” Elliott Smith admits in Heaven Adores You, Nickolas Rossi’s moving portrait of the late indie musician, who went from regional star to superstar after his Oscar nomination for 1997’s Good Will Hunting. “It was fun … for a day,” Smith reflects — and anyone who saw Smith’s hushed Academy Awards performance, on a night that also included Celine Dion’s chest-thumping rendition of “My Heart Will Go On,” has likely never forgotten it.

But Heaven isn’t overly concerned with Smith’s sudden celebrity and mysterious end (in 2003, he was found with two apparently self-inflicted stab wounds to the chest, but his death was ruled “undetermined,” rather than a suicide). Instead, it’s an artfully crafted study of a unique talent, avoiding music doc clichés in favor of more creative choices, like illustrating college-radio interviews — far more revealing than anything Smith would share with journos seeking Oscar sound bites — with gorgeously composed shots of Smith’s beloved Portland, Ore. Heaven widens to contextualize Smith’s importance within the 1990s Portland scene, with former members of his pre-solo band, Heatmiser, and fellow musician and longtime girlfriend Joanna Bolme among the interviewees. (Unfortunately absent: Hunting director Gus Van Sant.) But Smith’s soulful, eerily timeless songs (described here as “little pictures made of words”) remain Heaven‘s focus — appropriate, since they were always Smith’s focus, too.

A less-tragic tale of reluctant fame unfolds in Jody Shapiro’s Burt’s Buzz, which opens as its subject, Burt’s Bees co-founder Burt Shavitz, arrives in Taiwan to what can only be described as a hero’s welcome. Given the fact that Burt’s Bees products crowd drugstore shelves as ubiquitously as Neutrogena and Cover Girl, you’d be forgiven for assuming THE Burt lives the lavish life of a lip-balm magnate. Which is not the case, since the aging Shavitz prefers an exceedingly spartan life in rural Maine, with a woodstove providing heat and a begrudging acceptance of running water. “A good day is when no one shows up, and you don’t have to go anywhere,” Shavitz opines.

Not that he has any choice. When Burt’s Bees went from homespun to corporate, all the dough went to Shavitz’s former business (and romantic) partner Roxanne Quimby, who’d bought him out when their relationship went sour; most of Shavitz’s income seems to stem from making personal appearances for a company he no longer has much else to do with. (Quimby’s upbeat son is interviewed in her stead, though we do glimpse her in excerpts from a TV program entitled How I Made My Millions.) Still, Shavitz — knowing that Burt’s Bees is stuck with him forever, since his name and bearded visage decorate the brand’s folksy packaging — remains remarkably blasé about his financial situation. He’s not into material possessions, though he’s comfortable enough to have a “majordomo” help him with his affairs, and is enough of a diva to demand rice milk rather than the soy milk proffered by his eager-to-please Taiwanese hosts.

Shapiro’s documentary is a bit overlong (do we really need to see ol’ Burt Skyping with his dog?), but it wisely highlights the most interesting element of Shavitz’s story, which is not “Did he get ripped off?” or “Look at this crazy hippie!” but “Is this guy more self-aware than he’s letting on?” Though his assistant insists “He’s like Colonel Sanders, and he simply does not understand that,” it’s never entirely clear — though Shavitz’s own assertion that “No one has ever accused me of being ambitious” certainly has the ring of truth, rather than bitterness, to it.

Elsewhere in SFIFF’s documentary programming, two films take contrasting approaches to the artistic process. Of local interest, Jeremy Ambers’ Impossible Light, a close-up look at the Bay Lights — the high-tech art installation that illuminates the western span of the Bay Bridge — smartly runs a lean 71 minutes. First, we meet project founder Ben Davis, who had a brain wave one sunny day while idly staring at the bridge, which he’d always appreciated despite its ugly-stepsister status next to the glamorous Golden Gate. After artist and LED wizard Leo Villareal joins up, the ball really gets rolling, and Light tags along as a dedicated group of big thinkers form alliances with Caltrans engineers and other hands-on types who believe in Davis’ “impossible idea.” Nobody who sees this film about what became a truly collaborative process — Bridge workers scale the towers, tinkering with laptops! Creative types scramble to raise eight million bucks from private donors! — will ever take the intricately twinkling end result for granted.

The opposite of straightforward: The Seventh Walk, inspired by the nature-themed art of Indian painter Paramjit Singh. Director Amit Dutta brings Singh’s work to life with his questing camera, floating through the Kangra Valley’s leafy forests and across streams as water rushes, birds squawk, and insects hiss on the soundtrack. We also see Singh himself, dabbing his textured, abstract work onto canvases as the movie around him becomes more surreal. Occasional poetry fragments appear on screen to make the waking-dream vibe even more immersive: “Deep in the forest, the musk deer frantically pursues its own fragrance: laughter!”

Despite its title, it takes awhile for laughter to enter Happiness, Thomas Balmès’ tale of Peyangki, a restless nine-year-old monk living in remote Bhutan — the last pocket of the country, which prizes its “gross national happiness,” to get electricity. Stunningly composed shots (those mountains!) showcase a simple, deeply traditional lifestyle that’s about to completely change, for better and probably worse — ominously, everyone’s conversations already revolve around television. When Peyangki gets the chance to travel to the capital city, he’s fascinated by everything: mannequins, crutches, packaged snacks, aquarium fish, and, at last, TV, where the first thing he glimpses is Wrestlemania (and he’s on to it immediately: “Is it real?”), and you can practically see the innocence melting away.

A more conventionally-structured doc comes from Stanley Nelson, no stranger to powerful material with previous films like 2011’s Freedom Riders, 2006’s Jonestown: The Life and Death of People’s Temple, and 2003’s The Murder of Emmett Till. Nelson returns to the civil rights movement for Freedom Summer, which mixes archival material and contemporary interviews to detail the youth-propelled African American voter drive amid menacing intolerance in 1964 Mississippi.

News reports about the disappearances of workers James Chaney, Andrew Goodman, and Michael Schwerner — “Mickey” to wife Rita, as eloquent and composed today as she is in 1964 footage — weave throughout the film, with the discovery of their bodies recalled by folk legend Pete Seeger, who learned about it while performing on a Mississippi stage. While the events detailed in Freedom Summer have been covered by numerous other documentaries, Nelson’s impressive array of talking heads (not identified by name, though many are recognizable) brings a personal, eyewitness touch to this history lesson. *