Home Record Store Day: Where to get your (musical) high tomorrow 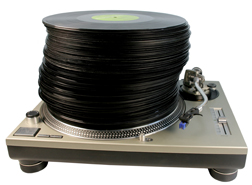 You did it! It’s Friday!

This weekend will see a convergence of two holidays that, come to think of it, overlap rather nicely given their impact on chocolate sales. Whether you’re celebrating the resurrection of Christ by donning an elaborate hat for church or the recent renewal of your medical marijuana card by finding new and creative ways to mainline THC (word to the wise: be careful in public this year), Sunday, April 20 is shaping up to be a fine day for people-watching in this city.

But hey, fellow music nerds: We all know both of those pale in comparison to what’s going down on Saturday. Yes, like the first esoteric, vinyl-collection obsessed, possibly slightly-condescending-at-times robin of Spring, Record Store Day is upon us once again. Tomorrow, Sat/19, will be a pretty good day to visit just about any (actual, brick-and-mortar, non-Internet-based) record store in the Bay Area. Now in its seventh year, the holiday — which, its website notes, was kicked off in 2008 at San Francisco’s Rasputin, by none other than the boys from Metallica — is celebrated at stores on every continent except Antarctica.

No need to pack your bags though: Here’s what’s going down at a few Bay Area establishments that sell music in all its excellent tangible, physical forms.

From the Mission’s Aquarius Records, owner (and Minor Forest drummer) Andee Connors wrote us the following when we asked what he was stoked on this year:

3. Ron Jeremy, Understanding and Appreciating Classical Music With Ron Jeremy, 7″ (only a 7″??)

I think our customers are probably excited for those, but they’re / we’re also looking forward to the Heatmiser (Elliott Smith’s old band) LP reissues, the four soundtrack LPs on Death Waltz, Pussy Galore reissue, Rodion G.A. reissue, the Space Project compilation…also, we have a new release from local band Twin Trilogy, featuring Sean Smith, the first in a series, ONLY available at aQ on RSD, and on Sunday, Twin Trilogy will be playing a special in-store at aQ. Record store day part 2!!! [Ed. note: Should pair well with your other Sunday celebrations].

Across the Bay at Oakland’s 1-2-3-4 Go!, a full-day party will kick off when the store opens at 8am. “Last year people started lining up around 4:30am, to give you a heads-up if you plan on coming for the opening,” advised owner Steve Stevenson, adding that they’ll have coffee from SubRosa and donuts from Pepples (while supplies last) for those of you who line up early.

Giveaway: A test pressing of the Green Day Demolicious 2xLP, autographed by Berkeley boy Billie Joe Armstrong. The first 100 people in line will get a raffle ticket; once the 100th person has handed in their ticket, the drawing will commence.

James Williamson of The Stooges will be doing a signing and chatting with fans from 10am to 11ish. (Ed. note: !!!!)

Hella Vegan Eats will be on hand making breakfast and lunch throughout the day. “Not free, but well worth it even if you’re not vegan,” says Steve. They’ll also have a couple of kegs from Linden Street Brewery for over-21 folks, for free, after noon.

Bands: Ghoul will be playing a very special “surf” set from their RSD Hang Ten 10″ out on Tank Crimes at 3pm, with Occultist opening.

An entirely non-comprehensive list of what’s happening at other stores:

Amoeba Berkeley — In-store DJ sets from Jonah Nice and DJ Inti; 20 percent off all turntables, posters, and some other accessories; giveaways TBA.

Amoeba SF — Same sales as above, plus live silk-screening from 11am to 2pm with special RSD 2014 designs, one by Zach of Saintseneca; t-shirts and totes available for purchase, with all proceeds going to the San Francisco Rock Project. Plus a full day of guest DJs, including folks like Andy Cabic of Vetiver and Ezana Edwards and Ryan Grubbs from Blood Sister.

And now a word from your Record Store Day 2014 ambassador, Public Enemy’s Chuck D, whose duties coincide with an RSD reissue of a very fine 1988 album. Happy crate-digging!