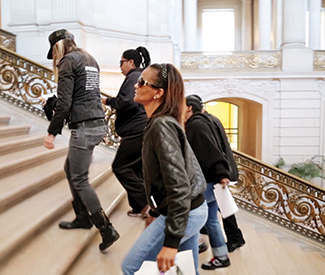 Like so many San Franciscans, Sabrina Carter is getting evicted.

The mother of three says that if she loses her home in the Western Addition, she’ll have nowhere to go. It’s been a tough, four-year battle against her landlord — a St. Louis-based development company called McCormack Baron — and its law firm, Bornstein & Bornstein. That’s the same law firm that gained notoriety for holding an “eviction boot camp” last November to teach landlords how to do Ellis Act evictions and sweep tenants out of rent-controlled housing.

But Carter’s story isn’t your typical Ellis eviction. Plaza East, where she lives, is a public housing project. Public housing residents throughout the country are subject to the “one-strike and you’re out” rule. If residents get one strike — any misdemeanor or felony arrest — they get an eviction notice. In Carter’s case, her 16-year-old was arrested. He was cleared of all charges — but Carter says McCormack Baron still wouldn’t accept her rent payment and wouldn’t respond to her questions.

“I was never informed of my status,” she said.

That is, until her son was arrested again, and Carter found herself going up against Bornstein & Bornstein. She agreed to sign a document stipulating that her eviction would be called off unless her son entered Plaza East property (he did). It was that or homelessness, said Carter, who also has two younger sons.

“They criminalized my son so they could evict my family,” Carter said.

McCormack Baron and Bornstein & Bornstein both declined to comment.

On March 12, Carter and a band of supporters were singing as they ascended City Hall’s grand staircase to Mayor Ed Lee’s office.

“We’re asking the mayor to call this eviction off. Another black family cannot be forced out of this city,” Lisa “Tiny” Gray-Garcia, co-founder of Poor Magazine, said at the protest.

Carter’s eviction was postponed, but it raises an important question: Why is a public housing resident facing off with private real estate developers and lawyers in the first place?

Plaza East is one of five San Francisco public housing properties that was privatized under HOPE VI, a federal program that administers grants to demolish and rebuild physically distressed public housing.

The modernized buildings often have fewer public housing units than the ones they replaced, with private developers becoming their managers. San Francisco’s take on HOPE VI, called HOPE SF, is demolishing, rebuilding, and privatizing eight public housing sites with a similar process.

US Department Housing and Urban Development is rolling out a new program to privatize public housing. The San Francisco Housing Authority is one of 340 housing projects in the nation to be chosen for the competitive program. The city is now starting to implement the Rental Assistance Demonstration program. When it’s done, 75 percent of the city’s public housing properties will be privatized.

Under RAD, developers will team up with nonprofits and architectural firms to take over managing public housing from the Housing Authority. RAD is a federal program meant to address a nationwide crisis in public housing funding. Locally, the effort to implement the program has been spurred by the Mayor’s Office of Housing and Community Development.

MOHCD Director Olson Lee has described RAD in a report as “a game-changer for San Francisco’s public-housing residents and for [Mayor] Lee’s re-envisioning plan for public housing.” Later, Lee told us, “We have 10,000 residents in these buildings and they deserve better housing. It’s putting nearly $200 million in repairs into these buildings, which the housing authority doesn’t have. They have $5 million a year to make repairs.”

Funding is sorely needed, and this won’t be enough to address problems like the perpetually broken elevators at the 13-story Clementina Towers senior housing high-rises or SFHA’s $270 million backlog in deferred maintenance costs.

But RAD is more than a new source of cash. It will “transform public housing properties into financially sustainable real estate assets,” as SFHA literature puts it.

RAD changes the type of funding that supports public housing. Nationally, federal dollars for public housing have been drying up since the late ’70s. But a different federal subsidy, the housing choice voucher program that includes Section 8 rent subsidies, has been better funded by Congress.

The RAD plan comes on the heels of an era marked by turmoil and mismanagement at the Housing Authority. The agency’s last director, Henry Alvarez, was at the center of a scandal involving alleged racial discrimination. He was fired in April 2013.

In December 2012, HUD declared SFHA “troubled,” the lowest possible classification before being placed under federal receivership. A performance audit of the agency, first submitted in April 2013 by the city’s Budget and Legislative Analyst, determined that “SFHA is expecting to have no remaining cash to pay its bills sometime between May and July of 2013.”

Six of the seven members of the Housing Authority Commission were asked to resign in February 2013, and were replaced with mayoral appointees.

Joyce Armstrong is not a member of this commission, but she sits on the dais with them at meetings, and gives official statements and comments alongside the commissioners. Armstrong is the president of the citywide Public Housing Tenants Association, and she talked about RAD at a March 27 meeting, conveying tenants’ apprehension toward the expansion of private managers in public housing.

“Staff in HOPE VI developments are very condescending,” Armstrong said. “We’re not pleased. We’re being demeaned, beat up on, and talked to in a way I don’t feel is appropriate.”

When RAD is implemented, it won’t just be development companies interacting with public housing residents. San Francisco’s approach to RAD is unique in that it will rely heavily on nonprofit involvement. Each “development team” that is taking over at public housing projects includes a nonprofit organization. Contracts haven’t been signed yet, but the Housing Authority has announced the teams they’re negotiating with.

“We call it the nonprofitization of public housing,” said Sara Shortt, executive director of the Housing Rights Committee.

The developers are a list of the usual players in San Francisco’s affordable housing market, including the John Stewart Company, Bridge Housing Corporation, and Tenderloin Neighborhood Development Corporation.

On March 13, when the Housing Authority Commission announced who would be on these teams, the meeting was packed with concerned members of the public. Two overflow rooms were set up. One group with a strong turnout was SEIU Local 1021, which represents public housing staff.

Alysabeth Alexander, vice president of politics for SEIU 1021, said that 120 workers represented by the union could be laid off as management transfers to development teams, and 80 other unionized jobs are also on the line.

She also noted that SEIU 1021 wasn’t made aware of the possible layoffs — it only found out because of public records requests. (Another downside of privatization is that certain information may no longer be publicly accessible.)

HUD protects some residents’ rights in its 200-page RAD notice. These include the right to return for residents displaced by renovations and other key protections, but rights not covered in the document — some of which were secured under the current system only after lengthy campaigns — are less clear. In particular, rights relating to house rules or screening criteria for new tenants aren’t included.

Negotiations with development teams are just beginning. Lee said tenants’ rights not included in the RAD language would be discussed as part of that process.

“It will be a function of what is best practice,” Lee said.

But developers have already expressed some ideas about public housing policies they want to tweak when they take over. At one point, the city was considering developers’ requests to divide the citywide public housing wait-list into a series of site-specific lists. Lee says that this option is no longer on the table.

But as developers’ interests interact with local, state, and federal tenant regulations, things could get messy. James Grow, deputy director of the National Housing Law Project, says that whatever standard is the most protective of residents’ rights should apply.

Grow said that inevitably some residents’ rights will be decided “on a case-by-case basis, in litigations between the tenant and the landlord…They’ll be duking it out in court.”

This will be true nationwide, as each RAD rollout will be different. But at least in San Francisco, “Most of the tenant protections in public housing will remain,” said Shortt. “We are trying to tie up any holes locally to make sure that there is no weakening of rights.”

Grow’s and Shortt’s organizations are also involved in San Francisco’s RAD plan. The National Housing Law Project, along with the Housing Rights Committee and Enterprise Community Partners, have contracts to perform education and outreach to public housing residents and development teams.

Just how much money will go to RAD is still under negotiation. The RAD funding itself, derived from the voucher program, will surpass the $32 million the city collected last year in HUD operating subsidies. But its big bucks promise is the $180 million in tax credit equity that the privatization model is expected to bring in.

The city will also be contributing money to the program, but how much is unclear.

“The only budget I have right now is the $8 million,” Lee said, money that is going to the development teams for “pre-development.”

Lee added that funding requests would also be considered; those requests could total $30-50 million per year from the city’s housing trust fund, according to Shortt.

To access that $180 million in low-income housing tax credits, development teams will need to create limited partnerships and work with private investors. The city wants to set up an “investor pool,” a central source which would loan to every development team.

It’s a complicated patchwork of money involving many private interests, some of whom don’t have the best reputations.

Jackson Consultancy was named as a potential partner in the application for the development team that will take over management at Westbrook Apartments and Hunters Point East-West. That firm is headed by Keith Jackson, the consultant arrested in a FBI string in late March on charges of murder-for-hire in connection with the scandal that ensnared Sen. Leland Yee and Chinatown crime figure Raymond “Shrimp Boy” Chow.

Presumably, Jackson is no longer in the running, although the entire transformation is rife with uncertainties.

Residents often feel blindsided when management or rules change at public housing properties. And RAD will be one of the biggest changes in San Francisco’s public housing in at least a decade.

“People are concerned about their homes. When they take over the Housing Authority property, what’s going to happen? They keep telling us that it’s going to stay the same, nothing is going to change,” said Martha Hollins, president of the Plaza East Tenants Association.

Hollins has been part of Carter’s support network in her eviction case.

“‘These people can’t manage their own stuff and we need to do it for them.’ It’s that lie, that narrative, that is the excuse to eradicate communities of color,” Gray-Garcia said. “We want to change the conversation.”