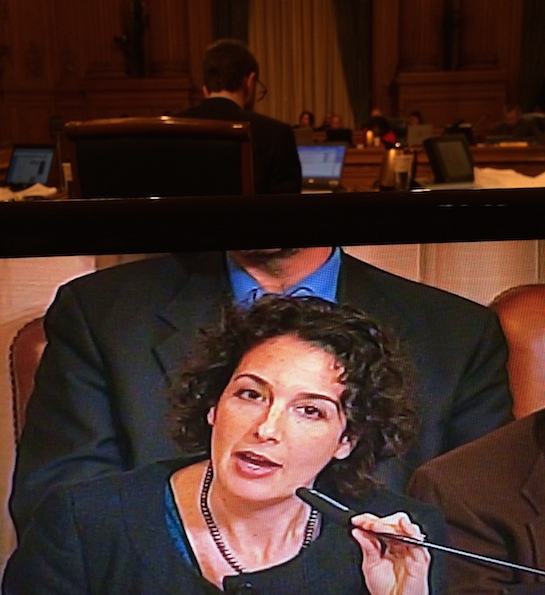 “You can’t say that you support the shuttles but don’t support their ability to pick people up and drop people off,” Sup. Scott Wiener said at the end of the hearing. “I disagree with the appellants.”

Sup. David Campos, who voted in favor of the environmental review, criticized the lack of public input in shaping the flawed program and said the city would likely lose in a future lawsuit on the issue: “If this is denied, there may be a legal victory for the appellants in court.”

The decision followed a heated, hours long public hearing on the environmental impacts of the San Francisco Metropolitan Transportation Agency’s commuter shuttle pilot program at City Hall, called for after an environmental appeal was filed in February by the SEIU Local 1021, The League of Pissed Off Voters, and the Harvey Milk LGBT Democratic Club. The pilot program will measure the impact of regional commuter shuttles at 200 bus stops around San Francisco, paid for by charging the shuttles $1 per stop, which the SFMTA said is the cost of administering the program.

The appellants had one goal: to call on the city of San Francisco to study how regional commuter shuttles affect San Franciscans.

“These are pirate shuttles, they are illegal,” Richard Drury, the attorney for the appellants filing the CEQA review, told the supervisors. “We’re bussing wealthy, predominantly white adults into low-income neighborhoods, where they in turn displace low-income people. This is the reverse of affirmative action.”

Importantly, a distinction was made between intra-city shuttles, like those for hospitals and colleges, and intra-city or regional shuttles, which are largely run by tech companies located outside San Francisco.

Those present were there to discuss the impact of the regional shuttles, whose larger size (measured in tons) more greatly impacts road wear and tear, uses diesel fuel in lieu of gasoline, and, the appellants say, displaces communities wherever they regularly stop.

Pictured above, a journalist tweets an artist rendering of the pirate shuttles.

An Anti-Eviction Mapping Project study found 69 percent of no-fault evictions occurred within a four-block radius of the shuttle stops. CEQA recognizes displacement of people as an environmental impact, and the debate that night centered around whether or not to study if shuttle stops caused displacement of middle to low income residents. Some of the supervisors defended the tech companies to the nines, especially Wiener.

Wiener most ardently argued against the CEQA review, and he stuck it to the appellants’ attorney, Drury.

“It’s not a CEQA issue,” Wiener said. “There’s a certain set of assumptions that technology workers are not real San Franciscans. That they’re part of some invading force that is not part of the city, and aren’t one of us. Isn’t it part of your contention that people on these shuttles aren’t San Franciscans? That’s how [the environmental appeal] reads.”

Drury said it’s not about hating tech workers, or some sort of cultural rift. What this is about, he said, is tech companies paying for the impact they have on communities.

Sup. Jane Kim said the SFMTA could have used the pilot program as an opportunity to ask for smaller shuttles, use of white zones (as opposed to Muni stops), or any number of changes to the shuttle program. “There’s a lot more,” she said, “that the pilot could have done.”

Video of a Google protest the morning before the hearing shot by Guardian News Editor Rebecca Bowe.

Alysabeth Alexander of the SEIU 1021 said that overlooking the displacement the buses are causing in San Francisco is downright insulting.

“A handful of wealthy companies should not be able to come into our city and make a private infrastructure and ask San Franciscans to step aside,” she told the room.

Activists, city workers, and San Franciscans of all stripes aired their concern for skyrocketing rents in the areas immediately around regional commuter shuttle stops — the stops of the tech buses.

The supervisors also used the hearing as an opportunity to stick it to the concept that the buses would only cost $1 per stop.

Ultimately some 50 or so supporters of the environmental review came out, who all had gripes about the Google buses, as they’ve come to be called. Later in the night past about 8pm the tech workers finally got to have their say.

There weren’t many of them, but those who spoke were impassioned.

Andrew Textor, a tech worker who did not want his employer named, said “I’ve lived in the city for 10 years, I’ve been riding the shuttles four and a half. Please let this program go forward. I’m not a new arrival, i don’t like being called ‘techie.’ I’m still a San Franciscan.”

But Textor was one of only a few tech workers in attendance by the time the counter argument to the review was heard (hours later), most remaining were paid public relations persons. Sup. Malia Cohen called out the tech companies for not showing up to the meeting and participating in their community.

“I think it’s worth pointing out how absent the tech companies are,” she said, differentiating this hearing from when Twitter was seeking tax breaks three years ago. “The tech executives were swarming City Hall when they wanted something.”

SFMTA dir. Ed Reiskin answers the $1 million question: Out of 13,000 traffic citations, why only 45 to #googlebus? pic.twitter.com/Od8IaibL4A

When asked why the SFMTA did not ticket commuter shuttles when in red zones in violation of state law, SFMTA Diretor Ed Reiskin said “I don’t know.”

That’s a point that tech worker Martin MacKerel touched on while speaking during public comment earlier.

“I’m here to talk to my fellow tech workers here, I’m asking you to reconsider this,” he said, speaking of opposing an environmental review. “We’ve got to consider that we’re displacing people into Antioch, San Pablo, the East Bay. If they have to drive in to San Francisco, we need to know that. We need a real study.”

But that’s not the way the night went. The supervisors voted against the environmental review. Campos’ remarks before the vote sounded like a eulogy.

“This is about a small group of people going to the city behind closed doors,” Campos said. “As long as we keep doing that, we’re only going to exacerbate the tension that’s out there. Working with the tech industry does not mean you roll over and give them everything they ask for.”

The 18-month pilot program will move forward and launch July 1, barring intervention by the courts.

Tweets from the night, some from the Bay Guardian, some not:

No matter what dog and pony show is going on at SF City Hall tonight. The money Google is putting up for #googlebus is a CHEAP price to pay.

#muni @EdReiskin would love to charge #googlebus more than $1 but prevented by state law Others say pilot breaks law pic.twitter.com/GcgUGYaxEn

The #GoogleBus hearing is so long, @TechCrunch said “fuck it!” and published a story midmeeting, before anyone voted: http://t.co/EWI9bXdCTN

Woman in wheelchair talks about not being able to get on #muni because of #googlebus http://t.co/rTAzOd4W1x

Cynthia Crews of the League of Pissed off Voters reminds everyone this would study shuttle impacts, not stop shuttles pic.twitter.com/GahlTnsfRJ