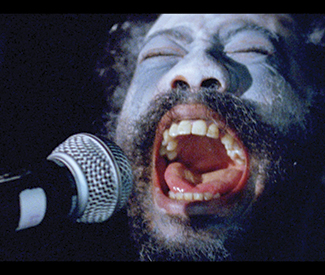 In other words, if you’re counting down to the next Transformers flick, this may not be your jam. But there’s an eager Bay Area audience for the other end of the cinematic spectrum, as evidenced by the fact that Crossroads’ “Nathaniel Dorsky: Three Premieres” program, which is being presented twice at Yerba Buena Center for the Arts, is already sold out.

Fortunately, there are eight other programs, two of which focus on Ben Rivers and Ben Russell’s A Spell to Ward Off the Darkness, which makes its Bay Area premiere after receiving much buzz on the international festival circuit. Robert A.A. Lowe (also known as Lichens, he’s a solo musician who performs with local doom droners Om on occasion) plays the film’s central character, a nameless wanderer who drifts through its three segments in pursuit of some mysterious ideal. First, he’s a commune dweller — no context is given, but its residents are clearly international, with varying accents and languages, and the directors have said it’s set on an Estonian island.

It’s an idyllic place: leafy, creative, and harmonious, populated by a group that’s more back-to-the-land intellectual than hippie. There are newborn babies, towheaded children with painted faces, adults-only group saunas, and a geodesic dome. “This whole process is unpredictable. It’s important to keep in mind, the visions and ideas are just guidelines,” one man reflects; he’s referring to the group’s pursuit of what one woman calls “utopian architecture,” but he could also be giving viewing instructions for this film.

It’s useful advice, especially when Spell shifts settings. Lowe’s quiet observer is now a man roaming solo through the Finnish woods; the camera gazes into the landscape from afar as he climbs up and down trails, up and down through the frame. Occasionally, he stops by a small house, seemingly abandoned but still containing certain odd objects (needlepoint pictures, stacks of tabloids, floral curtains). Nature fascinates the camera — including, yes, multiple long shots of lichens — but so does Lowe, specifically his eyes, which are held in close-up after he’s shown dabbing white makeup on his face. Suddenly, we see the house engulfed in flames, there’s a cut to black, and then we hear the exact right music to show after an inferno: black metal, that most deliberately lo-fi and ear-shredding of heavy musical subgenres.

For metal fans, this sequence could prove the most controversial — there aren’t any Scandinavians in the mix, and one of the dudes is from Liturgy. (Like, do they even burn churches in Brooklyn, man?) But even music snobs will have a hard time resisting Spell‘s spell, or giving kudos for the film’s title treatment — a slightly more readable interpretation of the spidery font favored by extreme musicians, encasing words that echo the film’s surprisingly optimistic undercurrent.

Co-director Rivers appears in person at the film’s Fri/4 screening; Sat/5, he’ll give an artist’s talk, moderated by SF Cinematheque’s Steve Polta, at the Kadist Art Foundation, where the film will be exhibited as a “three-part spatialized architectural video installation.”

The rest of Crossroads is given over to shorts programs, assembled with characteristic creativity (Program 3 “is focused on abstract animation-graphic cinema, environmentalism, and crack pot exploration,” according to Polta), with co-producing credits given to Cinema Arts at the Exploratorium and the San Francisco Dance Film Festival on selected nights. There will also be a “live cinema” program (with live experimental music), and works by notable locals, including recent Guardian GOLDIE award winners Malic Amalya and Paul Clipson. *