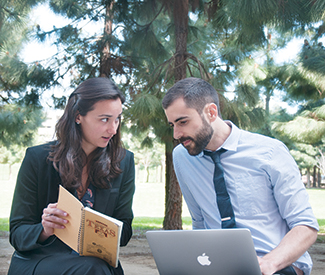 About a year ago, they were outside a Regents meeting in Sacramento and, joined by about 60 other students, symbolically locked to a pair of handmade, 10-foot-tall models of oil rigs they’d set up outside the conference center.

“The idea was the symbolism of us being chained to an extractive economy that’s not sustainable,” Bruck explained to us. The message they hoped to impart to the Regents was: “They have the keys to our fossil freedom.”

Taking advantage of the public comment session to get their point across, the students were there to call on the Regents to withdraw UC investment holdings in companies such as Exxon, Chevron, BP, and other leading fossil fuel companies. The campaign, Fossil Free Cal, is just one of dozens of student-led efforts nationwide seeking to convince campus administrations to withdraw funds from oil and gas companies as a way of curbing greenhouse gas emissions and fighting climate change.

But other prominent schools have declined. Last October, Harvard University announced that it would not honor students’ request to withdraw investment holdings from the fossil fuel sector, saying such a move would “position the university as a political actor rather than an academic institution,” and could “come at a substantial economic cost.” A student effort to have Brown University divest from fossil fuels also went down the tubes.

Divestment by California’s flagship public university system would have a significant impact. UC Berkeley’s endowment is $3 billion, while the total UC system endowment is $11 billion. Fossil Free Cal organizers estimate that about 5 percent of that money is tied up in the fossil fuel sector.

Beginning with the kickoff to their divestment campaign at that first Regents’ meeting in Sacramento, the students’ message seems to have resonated. In the time since, they’ve attended every Regents meeting, met individually with certain board members, submitted reports in support of divestment, and earned an official endorsement from the UC Students’ Association, a student government that spans all UC campuses. Some individual regents have been receptive — but so far, the powerful UC governing board has not seriously taken up the question of divestment.

“We’re worried about what our future looks like, and what they are doing with our money,” Fernandez said. “We’re saying, if we’re invested in fossil fuels, we’re inherently invested in the destruction of students’ future.”

Nationwide, the campaign to divest from fossil fuels is a proactive, youth-led movement hinged on a moral argument: Since climate scientists have said it is dangerous to continue burning fossil fuels at current rates, universities have an ethical obligation to withdraw support from those corporations sticking to existing business models for extracting and burning fossil fuels.

To argue their case, the students are highlighting a quandary. There’s global scientific consensus that burning fossil fuels is the reason climate change is occurring, and this has led the international community to take action. In 2010, members of the United Nations agreed to take steps to prevent an average global temperature increase above 2 degrees Celsius.

But according to a 2012 report issued by the Carbon Tracker Institute, a London-based think tank, the amount of carbon stored in reserves by the world’s leading 200 leading fossil fuel companies is enough to trigger that temperature increase five times over, if all the reserves were extracted and burned. That would severely alter the global climate with dangerous and irreversible impacts, according to climate modeling scenarios.

To lessen that damage, students are advising their campus administrators to withdraw from fossil fuels, arguing that it makes good business sense. Internationally, some economists have begun referring to a “carbon bubble,” with Green Party members of the European Parliament releasing a study last month to warn of the effect it could have on the pension funds, banks, and insurance companies in the European Union.

Even with the dawning realization that fossil fuel companies’ holdings can’t be burned if the international community is to meet its goals to fight climate change, the UC Regents have yet to make any clear indication on whether they will continue to keep millions of dollars tied up in that sector.

It may well go there, but at this stage, organizers are still hoping the Regents will take leadership in response to their campaign. Specifically, they’re pushing for UC to drop all existing investments in fossil fuel companies over the next five years, and roll out a climate change investment strategy.

On April 4, organizers behind this effort will host 300 students representing 100 schools from across the United States and Canada, for a conference on the fossil fuel divestment movement. The two-day strategy session, which will be held at San Francisco State University, aims to strengthen the youth-led movement to fight climate change by getting at the economic root of the problem, through divestment.

“Our goal is divesting in the next two semesters,” Fernandez said. But since students cycle out of the universities over four years, and Regents are appointed for terms lasting 12 years, she realizes accomplishing this goal might mean relying on newly engaged students: “Maybe our freshmen right now will have to bring it home.”