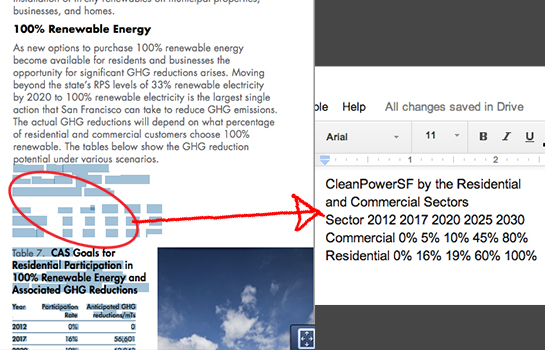 The fight for clean power in San Francisco just got a whole lot dirtier.

In an update to the City’s Climate Action Strategy report, a prominent section discussing goals to use renewable energy featured CleanPowerSF — and then suddenly it didn’t.

For those not in the know, CleanPowerSF is a renewable energy initiative meant to give San Franciscans 100 percent renewable energy, while making us a hell of a lot less reliant on the local monopoly: PG&E. The initiative, pushed by Supervisors John Avalos, David Campos and other progressive allies, faced long-time blowback from Mayor Ed Lee.

To reach those goals many feel we need CleanPowerSF, but the mayor seems to have scrubbed it out of his environmental report without so much as a how-you-do.

The change was made apparent by a prominent blank white space on page 17 of the Climate Action Strategy report, and was discovered by Supervisor John Avalos’ office. When you highlight the blank space with your cursor, copy the section, then paste it into a document, you can see the goals of CleanPowerSF laid out plain as day.

The scrubbed information shows CleanPowerSF helping the city reach its renewable energy goals. The numbers are hidden in the Climate Action Strategy report, like a message in a bottle, or a painted egg hidden under a bush on Easter.

It’s as if someone didn’t want to delete the CleanPowerSF entry entirely, and instead turned the text white in order to signal that the text used to be there. Perhaps the preparer of this report was foiled by the technological wonder known as cut-and-paste. Or more intriguingly, perhaps this was the first-ever case of activist report writing (in which case: Dear subversive report writer, please send us documents through BayLeaks).

Whether the information was left in accidentally or on purpose, it’s now clear that the mayor is dead set on scrubbing CleanPowerSF from city records, even at the expense of the city’s environmental goals.

Above is the report. Check it out for yourself, page 17 (in the report’s numbering, not the digital numbering).

At the mayor’s Question Time today, where supervisors ask pre-planned and pre-announced questions of the mayor, Supervisor Avalos pinned Mayor Lee down on the document scrub-out.

“In your letter of introduction to the 2013 CAS you wrote the need for action has never been more evident,” Avalos said. “The Climate Action Strategy goes on to state that moving onto 100 percent renewable energy is the biggest single step the city can take to reduce greenhouse gas emissions. And yet there was an attempt to scrub CleanPowerSF… from the Climate Action Strategy.”

The version of the Climate Action Strategy included a whited out table on CleanPower SF… that table was unceremoniously removed in a new version posted two days later,” he said.

The mayor’s answer was filled with some equivocations and some fabrications.

“We should not move forward with a program that contracts with a fossil fuel company in Texas, it doesn’t produce enough local jobs or environmental benefits,” he said. “Supervisor, I’m glad you mentioned the Climate Action Strategy.”

Retired San Francisco Public Utilities Commission Executive Director Ed Harrington told  Guardian Editor Steven T. Jones exactly why CleanPowerSF was needed, in a story of his back in 2012: “This program before you has the only chance of reaching those goals. There’s nothing else.”

Asking Mayor Ed Lee to explain the disappearance of the information from the report.

After question time, this reporter and a few others questioned the mayor as he walked back to his office.

What was behind the scrubbing of the CleanPowerSF data? Why did it suddenly vanish from the report?

“I don’t think I have a real answer for that,” the mayor said.