Home All of the fucks that we should be giving: An evening with... 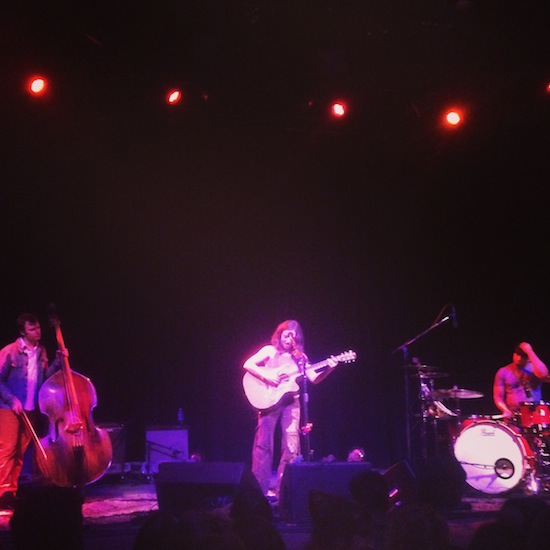 When I was 13, I was a late-blooming tomboy, watching, confused, as everyone around me grew up and started acting different.

In school, we were writing “conflict stories.” Mine was about losing all my friends to puberty (theirs, not mine). My teacher sat me down on a particularly rough day and said, “Here. This is for you. Don’t tell your parents.” She handed me a copy of Ani Difranco’s Dilate, complete with the parental advisory label shining through the jewel case.

In hindsight, this may have been one of the more amazing gifts I’ve ever received, if not for its origin (what teacher does that?), then for the seismic brain/heart shattering that can only happen to a 13-year-old girl listening to Ani Difranco for the first time. I was floored. My emotions were obviously in desperate need of translation, and DiFranco’s poetry and emotional delivery was something I had never experienced. It’s alright, everything is uncomfortable, everything is changing. It’s cool, this woman is talking about things, and she’s angry and she’s sad, and she’s happy, and she has dreadlocks and boots and says “Fuck you.” Maybe you can be whatever you want/are?! I was a fan from that moment on, and although a lot has changed since then, the feeling that happens when I see her play her songs live is pretty similar to that first listen back in 1996.

Although thus far I’ve discovered that writing a review of an Ani DiFranco show is apparently like writing in your diary, I will attempt to review the things that actually happened on Friday [3/7] at the Fillmore.

Opening the show was Jenny Scheinman, an artist on DiFranco’s own Righteous Babe label. Scheinman, a prolific artist, composer and arranger in her own right, started the night off with a haunting fiddle tune that resulted in a well-deserved hush from the crowd. Plucking her fiddle, she sang a set of lyrically lovely Appalachian-style songs based on reflections of her Northern California hailing grounds. The Fillmore was full and quiet, with only the occasional anxious shoves from folks trying to claim precious real estate.

When DiFranco walked out there was wave of both excitement and relief. The power, charisma, and authenticity DiFranco delivers at her live shows has earned her incredibly loyal fans who line up, city after city, to be shaken back into something, or shaken out of something else. They show up to be moved, and Friday night, they sensed that motion was about to occur. Necks craned, squeals of excitement were released, and the beam of light that radiates from DiFranco’s wide grin took the stage. DiFranco was accompanied by Todd Sickafoose, her longtime upright bass player, and New Orleans’s Terence Higgens on drums, who, turns out, can also rip surprise kazoo solos. These two provide a pocket deep enough for DiFranco to roam through each sonic peak and valley. The trio is a well-oiled machine, and Sickafooose and Higgens add a lot to these songs, a testament to their sensitivity and chops. They support and compliment DiFranco’s distinctive guitar playing — which is is wild and lucid, both careful and careening. She rips, righteously, and they are right there with her.

Now, I know that DiFranco probably cannot actually see into my soul and choose her setlist according to what’s happening in my life, but I can’t be completely sure. She pulled from many different parts of her rich catalog, including five new songs that hit me in all the places that needed hitting. (How does she know? Why so magic?) I know I’m not alone in this, but her confessional lyrics and clever poetry are so personal, it’s difficult not to feel a sense of ownership over these songs, to remember who you were when you first heard them. Somehow her relevance feels both intimate and universal.

She played some newer ecological crisis songs (“Some call it conservation, some call it common sense”), touching on environmental awareness and self-awareness (shouldn’t these be connected?) and the dangerous complacency we have lulled ourselves into. Revelations continued throughout the night as she delved into older songs dealing with love, the problem of monogamy, the trauma of history, the irreversible damage that words can do, and even perspectives from a Caribbean church. Somehow, all things felt covered. Lines stood out that needed to stand out. DiFranco delivered a beautifully open window into a human being who is steadfastly paying attention to the world, her place in it, and calling them both out. It’s good to know that DiFranco is still fighting the good fight, and reminding us to do the same.

I have heard it said that the reason DiFranco is so powerful is because she doesn’t give a fuck. But on Friday night, it occurred to me that it’s not that she doesn’t give a fuck, but that the rest of us sometimes lose touch with all the fucks that we should be giving. For me, DiFranco is a refreshing and necessary voice of realness. Honesty without agenda, from so many different angles. So there you have it. I go forth into the world shaken, stirred, and reminded.