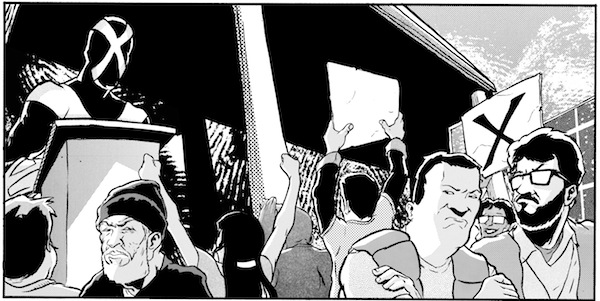 In our Jan. 1 issue, the Bay Guardian spun the tale of Candidate X, a fictional progressive mayoral candidate aiming to save San Francisco’s wonderfully weird soul using people power. The hope? To inspire a candidate to run in the City’s election in 2015 with strong progressive bona fides, and the values that inspired a nation during the rise of the populist Occupy movement.

Now a real life Candidate X has surfaced, but not in San Francisco — this X is challenging Jean Quan for her seat as Oakland’s mayor, using our Candidate X story to define, elevate, and amplify his candidacy.

Meet Jason “Shake” Anderson, 38, a former Occupy Oakland spokesperson, veteran, and now Green party candidate for the Oakland mayor’s race. He hopes to take the lessons from Occupy to help reinvigorate the city he calls home.

“It doesn’t get much news, but Occupy Oakland dropped crime in the city in that moment. It’s because people had places to sleep and places to eat. Those things drop crime,” he told the Guardian. “I’m not saying we camp again, but we need to find ways to do things like that. We have empty buildings, how about we give organizations who feed people on a daily basis a building that wasn’t being used to begin with?”

Anderson is an African American man, and although he feels black Oakland needs representation, he’s about bridging divides: “My attitude is we take care of our people first; not just black or brown people, but people.”

Thinking with people power is Anderson’s modus operandi. He noted that the Port of Oakland was severely disrupted by an Occupy takeover, showing the people have teeth. He doesn’t want to just fight people in power, but work hand in hand with them.

“I believe we can work with and not be separate from the power structure, and even the playing field,” he said. “A lot of people are mad at rich people, but I’m angry at disparate wealth. People are poorer and poorer, and they feel likes there’s no change in their course.”

That focus on building bridges and novel ideas to tackle everyday problems is what drew Anderson to our Candidate X feature back in January. He co-opted the imagery and message, distributing “Who is Candidate X?” flyers around San Francisco and Oakland. The front side features art from our Candidate X story, by the talented Sean Morgan, and the back features a brief description of Anderson’s candidacy as well as a QR code that links to a donation using Bitcoin.

You see, Anderson is a bit of a tech head, with a belief that eventually Bitcoin will be one way to free people’s money from banks that don’t look out for the interest of people. And much like our fictional Candidate X, he thinks the tech movement and activist movements have much in common.

“Candidate X comes from the concept of the 99 percent, the leaderless movement of Occupy,” Anderson said. “This is not about me, I’m just a guy. But I’m supposed to represent you.”