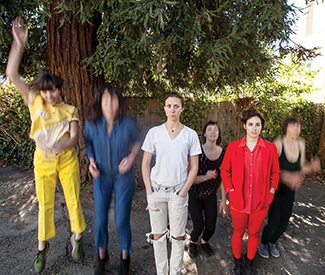 GOLDIES Creating a space for experimental contemporary dance and performance in Oakland, outside of the usual channels and roadblock$, has been an instigating, galvanizing mission for SALTA. The collective — a sharp and motivated group of seven women, all Oakland-based choreographers and dancers under 30 — has made a scene, built an audience, developed a network, enlarged an ethic, and opened up horizons in a beleaguered arts ecosystem.

They also know how to party.

SALTA was born at the same time as its monthly curated performance series, a spirited affair known during its first year as PPP (apropos of nothing), which rides high on a principle of serious experimentation in an utterly laid-back, strictly noncommercial setting.

A roving event that settles wherever the keys are handed over gratis (a surprising number of places), PPP and its progeny have showcased ragtag and newer pieces by a range of young, mid-career, and senior artists whose only brief is that they try something. While such a platform naturally embraces failure in the cause of exploration, the results have held many surprises and epiphanies.

Meanwhile, an open-door policy and community-stocked bar and boutique contribute to the lighthearted, well-oiled mingling of a crowd that often goes beyond dance initiates to embrace artists, bohos, and travelers of many kinds. (The first installment, at poet Zach Houston’s space downtown back in June 2012, was already bringing together normally discrete artistic milieus. As much a social experiment as an artistic one, it’s set the tone for those that have followed.)

SALTA has ambitions beyond the performance series. Back in June 2013, when the collective was celebrating its first birthday with the 11th installment of PPP, its members decided to take a summer hiatus from the performance series to concentrate on other projects. The plan was to reinstate it in the fall at a slower clip. But the momentum proved hard to deny, as the seven members of SALTA (who prefer to speak as a collective rather than use their individual names) recently explained.

“Yeah, it was really great, because with some — like Transmission Gallery [last December] — there was that intent, an invitation to collaborate with the space. People were interested in what we were doing in this different way. And that just provides us with food for thought, as far as how we then invite artists to be in that space in a particular way.”

“It’s kept us interested and engaged doing these events.”

“We’ve been talking more about finding some permanent space as well.”

“We aren’t going to go into details because it’s still in the works, but let’s just say we’re looking at a space in the Temescal area to do more curation, and hopefully be able to invite more people from out of town.”

“The other exciting thing for us about this opportunity is that it is a collective of collectives, here in Oakland. So it’s not just us who would be in the space but several other groups.”

“It still reflects our spirit, how we intend to be in spaces, engaging alternatively, without a big output of money. We found freedom in not doing that. It’s very specific to this opportunity, which is not set at all, but it’s a nice thing to think about.”

Among the advantages of such a move, they say, is the chance to become part of a touring network, while providing ongoing workshops and rehearsal room — “affordable open space for people to not just show work but develop.”

With or without a permanent space, SALTA’s second year is poised to expand. In April, the collective travels to the East Coast to co-curate an evening with New York’s AUNTS, another dance-performance collective (and an early inspiration), and to take part in an international symposium in Montreal on alternative models of curation in the performing arts. They’re already networking with other likeminded groups along the route, like Montreal’s Wants&Needs and the Centre for Feminist Pedagogy.

And, for the first time, they’re making a piece of their own together: an experience they call “pretty amazing and crazy.” As a process it’s also, needless to say, “as collaborative as possible.” SALTA moves in collaboration.

“Somehow we end up having this momentum. There’s this ease that just happens. We definitely work hard but with joy, I think. All of a sudden we’re rolling really fast.”