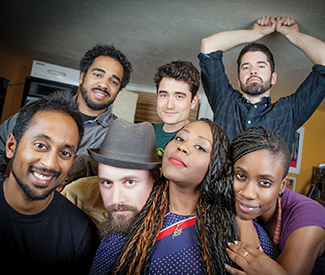 GOLDIES “What was the latest? Afro-futurism? Afro-futurism,” says Lalin St. Juste, songwriter and lead singer in the East Bay band The Seshen, of how the somewhat un-categorizable band has been categorized by critics most recently. “Which we’re kind of OK with. It makes me think of, like, a silver afro.”

“Or, you know, like we trade in afro futures,” says keyboardist Mahesh Rao, between bites of chips and salsa, eliciting a burst of laughter from his bandmates. “Electro-soul is OK too. We were calling ourselves electro-pop for a while, but then Paris Hilton came out with a record a while back that she was calling electro-pop, and I was like, Lalin, we gotta take that off our business cards.”

Call them what you will. The sounds this seven-piece band makes are captivating, layering the soulful, Erykah Badu-reminiscent vocals of St. Juste and the musical theater-trained Akasha Orr — whose smile you can hear in her voice — with precise electronic samples, dub sounds, R&B guitar grooves, bass lines that beg to be bumped out your car window at a stoplight, and percussion that seems to borrow from at least three continents.

It’s both sexy and a little nerdy: immersive, inviting, warmer than your weirdest Radiohead, but with a chilled-out, dreamy, late-night sensibility and spirituality. It’d be just at home on an indie-rock mix as, say, Beach House, but it’s hardly background music — there’s just too damn much going on. Live, the Seshen is committed to a specific blend of electronic elements and “humanity…I think we have something really human and warm, because of the vocals, live drums, other human elements,” says percussionist Mirza Kopelman. Regardless, the band’s setup is far from straightforward; St. Juste’s custom pedal board looks like it could power a small plane. “Sound guys hate us,” offers synchronizer-sampler Kumar Butler.

People often don’t quite know what to do with them, Seshen members are the first to admit. They’ve been labeled “world music” in the past simply because, as far as they can tell, they’re seven people representing a wide range of ethnicities. But especially following the release of last summer’s spaced-out, sped-up trip-hoppy, drum-and-keyboard-driven single “2000 Seasons,” which revealed a more upbeat sound than The Seshen’s self-titled 2012 debut, hip-shaking seems to be a common reaction.

“Some songs are meant for sitting and relaxing,” says St. Juste, “but in general, we want people to dance.” Bigger crowds and stages have followed. Playing Oakland’s Hiero Day last year, band members were overwhelmed to hear that some of their local childhood hip-hop heroes were Seshen fans, too.

It’s a rehearsal evening, which means members are sprawled around their studio — the tricked-out den of an El Cerrito house that St. Juste, producer-bassist Aki Ehara, and Orr all share — with snacks and beers and their notes about the most recent mixes of their upcoming EP, due out this spring. There’s a dartboard in one corner; a campy poster featuring the winged angel version of Michael Jackson dominates another, while D’Angelo stares across the room from an LP cover.

Just past a tiny enclave marked by a photo of Ehara’s grandfather is the producer’s recording and mixing setup — the band does it all, quite literally and very meticulously, in-house. The value of Ehara’s determined focus on the subtleties of a mix cannot be overstated, say his bandmates. In honing the band’s sound, says Ehara, he’s influenced by delving into the history of electronic music, he says, going back to John Cage and early BBC radio electronica. “That, alone, opened a whole other door for me.”

“I’ve played in a lot of bands, and I’ve never been in one that pays this much attention to detail,” says drummer Chris Thalmann. “Everyone has a really high level of expectation for what we put out there.” That perfectionism is starting to get attention: In January, they inked a deal with Tru Thoughts, an independent label out of Brighton, UK. After the EP comes out, the big plan for 2014 is to tour more — pack themselves into a 15-passenger van and find out if they get along as well on the road, stinky socks and all, as they do at home.

“We do have to corral ourselves back into working sometimes,” says Orr. “It is pretty amazing that with this many people we all really get along, but we do. We have fun, and we love each other. That part’s organic.”

“I think that’s part of what sets us apart from some electronic acts,” says Kopelman. “We’re seven people making something together. Not, you know, a mustachioed hipster on a laptop.”