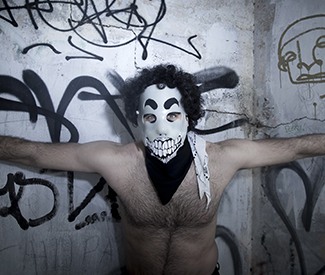 GOLDIES “I don’t care how much equipment you have, how many laptops you’ve got hooked together — if you’re just making a bunch of trendy electronic sounds, if you don’t know melody or dynamics or how to really play an instrument… you aren’t making any music.”

The masked man known as DJ Nebakaneza is notorious for his dazzling and unsettling outfits, gonzo energy, brain-scrambling bass, and rollicking social media presence. He isn’t afraid to court controversy or speak his mind about what’s going on in dance music, either. But dig a little beneath the flash and bombast and a portrait of an artist as a young bass maven emerges, one brimming with deep musical knowledge, canny intellectual vision, disarming charm, and inspiring faith in his hometown scene.

It’s almost impossible to talk about Neb without including the rest of his Irie Cartel DJ crew — JohnnyFive, Mr. Kitt, Miss Haze, and Danny Weird. Irie Cartel has had a profound effect on the San Francisco dance music scene. But to understand just how much of an effect, we’ll need to run down a little history of what didn’t happen in the San Francisco clubs.

In the early 2000s a deep and throbbing apocalyptic sound from the grimier neighborhoods of London called dubstep started shaking the bass bins of the underground. By 2007, it was seeping into club nights here like Grime City, Brap Dem, and Full Melt, drawing critical interest and providing a nice complement to the minimal techno and disco revivalism that was also happening at the time.

But then a funny thing happened: mainstream America, apparently looking for a new arena-style rockout, hijacked dubstep, gutting it of all but its deep bass and catchy name. Pop artists adopted the sound, twisting it into a series of bowel-rumbling bass drops (nothing wrong with those, really), and it became known more for its fist-pumping frat party reputation than a reflection of the more angsty corners of urbanity. A wave of bro-step began washing over US clubs, threatening to wash out more subtle party expressions with its macho aggression.

That onslaught was stopped at our borders, thanks to Irie Cartel, whose weekly Ritual dubstep nights kept the fun factor high (and the bass extremely low), but also made room for classic bass music sounds, experimental electronic showcases, and flights of melodic beauty. It still melted your face, but poetically. Irie also emphasized old school rave community spirit: At its height, in the basement of club Temple, the Ritual party included a community marketplace for people to sell their handmade wares and food. It was like a cosmic bass bazaar full of beautiful bass faces. “We’re all musically nerdy,” Neb says of his crew. “But we strip out all the ‘look at me’ ego that came with the mainstream dubstep scene.”

DJ Neb got into dubstep, in fact, as a fresh-faced youth who wandered into Grime City one night. “I spotted this flyer pasted to a wall and decided to check it out — it was at the old Anu club on Sixth Street at the time. And when I walked in, I was blown away by this wave of bass, these awesome sounds that seemed to be pulling me apart. I never looked back from there,” he told me over the phone, as he prepared to leave for a gig in Uruguay. “It seemed to pull together something that had been brewing in me somewhere. I’d always been into music. I started working at Rasputin Records as soon as I could, and would spend all my free time in there, too — just digging through bins and listening to music. My paycheck would go right back into those records. They used to pay me in music, essentially.

“As a kid, I played percussion. I went through a Janet Jackson and New Jack Swing phase, got really into hip-hop. I was deep into downtempo, trip hop, and rare groove when I started DJing. It was the whole ‘lounge era’ of nightlife, so I started getting a lot of gigs as a cocktail hour DJ. I even had a chillout show on KKSF, the smooth jazz radio station,” he laughed.

“But when the dubstep thing started blowing up for me, I realized it was time to create a new persona, and that’s when DJ Nebakaneza was born. I had to delete my previous existence. I made a ceremonial sacrifice of that guy.” Neb went on to host the Wobble Wednesdays show on Live 105 and rise to the forefront of forward-thinking yet accessible bass purveyors.

But now it’s 2014, dubstep has almost completely played itself out — bro-step wiz Skrillex’s latest shows have been billed as “playing the classics” — and Ritual is on hold. (“When dubstep became popular, Ritual suddenly had this massive influx of people who were drawn to the sound but had never been in a club before, didn’t know how to act,” Neb said. “They were spurned by a lot of our regulars, who closed ranks. But I was like, ‘We were all new at the party at one point, wouldn’t it be better to connect with these people?’ It was sad that our scene got so defensive. I wish we could have embraced the fear a little more. But we’re just giving everything a time out. Ritual will be back.”)

If dubstep is no longer an option, what’s a dubstep DJ to do?

Go back to the drawing board, of course. Last year, DJ Nebakaneza started releasing a series of exquisite mixes tapping into his vast knowledge banks. Each month he would take on a new, unexpected genre — yacht rock, rare disco, Dirty South hip-hop, instrumental funk, even emerging ones like half-time — and weave something magical from his roots. The Expansion Series is one of the most ambitious things I’ve heard a Bay Area DJ attempt, and it comes off pretty flawless.

“I was having an identity crisis,” Neb said. “Dubstep had kind of moved on, and I missed my crate-digging days. Playing those lounge sets — some of them were four or more hours long. That’s a lot of music. I missed being able to sneak all kinds of colors into it. I also missed playing the music that’s closest to my heart: Isley Brothers, James Brown, all that beautiful old funk and soul. I needed to break myself down a little to see how to move ahead.”

Currently, Neb is throwing a bass-oriented monthly party called Paradigm with fellow head Lud Dub. But he’s still planning his next sonic move. “I want something sexy, still with the bass, but a more ‘purple’ feel. Not the trap sound that’s been happening, but something deep and hot.”

Heavens, does that mean the edgy Nebakaneza persona will be tossed to the wind? “Don’t worry, Nebakaneza’s not going anywhere. And I’m still keeping the mask.”