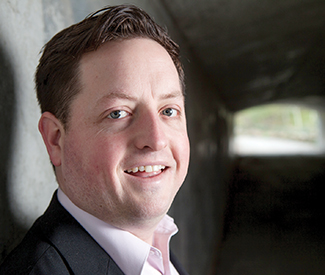 GOLDIES At a recent edition of the Business — his weekly comedy showcase at the Dark Room Theater — Sean Keane is fulfilling one of stand-up’s most cherished rituals: skewering the absurdities that inconvenience our daily lives.

Like BART seats, for instance. “Who’s the person with the bright idea of making BART seats out of carpet?” Keane asks, before re-creating one possible scenario for an uproariously-laughing audience: “Sir, I think we should use carpet, as much carpet as possible, carpet on the floor, carpet on the seats, carpet that we scavenge from an elementary school in the ’70s. And it should be as absorbent as a sponge. Every spill, every odor, every terrible thing that happens on a BART train should be preserved for eternity. And for cleaning we’ll shut down the whole system for six hours a night and lightly sweep it with a broom.”

Keane’s specialty is the observation beat. The self-described “baby-faced man with the body of a dad” deftly riffs on the various mishaps and oddities he encounters. With his sports-announcer voice, he spins comedy gold from that time he ate at an Ethiopian-Irish food truck, or witnessed the announcement of Osama bin Laden’s death on ESPN, or found himself having to react to a stranger’s curiosity about his “I’ve Got Beaver Fever!” T-shirt (true story: he used to coach a middle school swim team with a beaver mascot).

It’s no surprise that a unique city like San Francisco has produced such an effective observational comic. “It’s interesting how what’s unacceptable in SF is acceptable in other places,” Keane says. “The worst thing you can do is use a plastic bag. At the Folsom Street Fair, you can see guy in a full leather outfit just sitting on a street corner jacking off, but if he was jacking off into a single-use plastic bag, he’s a monster.”

Keane is also a sports fanatic. Stories from one of his blogs, sportscentr.tumblr.com, have been picked up by Deadspin and other mainstream outlets. Though he avoids incorporating wonky inside-baseball jokes into his comedy act, he’s able to combine his two passions by regaling crowds with hilarious sports-related happenings. (Like, say, his ejection from a bar after accosting someone clad in a 49ers pajama onesie.) His best sports-related gag is his hilariously accurate impression of a British commentator covering the NFL draft, and the inevitable culture clash that follows.

Keane comes from a humor-loving family that encouraged his performing ambitions. In high school, he was involved in musical theater, which he credits for helping him overcome a speech impediment and learning to properly enunciate. At UC Berkeley, he started doing stand-up, opening for touring acts like Dave Attell.

Cal is also where he developed his material-generating process. “We had a big white board in our living room where I would write ideas down,” he recalls. “The key is to write things down everywhere. When I’m driving, I record voice memos. You kind of feel like a crazy person when you do that, and duck to the side of the street and just start dictating something into the phone. I write things out like they’re lecture notes, with a subject and heading. Jokes comes first and then wording gets fixed later.”

After doing a lot of writing and improv, Keane fully committed himself to stand-up in late 2005 and early 2006. In 2009, he co-founded the Business, which has become a popular fixture on the local comedy scene.

“The Business helped with developing our style and skills due to the regular 20-25 minute sets,” says Keane. Of his fellow Business comics — including Caitlin Gill, Nato Green, and Bucky Sinister — Keane says, “When you perform with people every week, you pick up on stuff from them and you get pushed by seeing someone go out and kill.”

Sadly for San Francisco comedy fans, Keane is at that point in his career where a move may soon be necessary. “SF is a great place, but I need to get to the next level and there’s no comedy industry here,” he points out. “Your ceiling as a SF comic is two weekends a year at the Punchline, and two weekends a year at Cobb’s. To become a headliner, you have to be famous. To be famous you have to get on TV. And it’s hard to get on TV in a place that does not produce many TV shows.”

Until then, Keane’s Business is booming on Mission Street, delighting audiences every week — even those who have to ride those carpeted BART seats to get home. Catch him while you can.