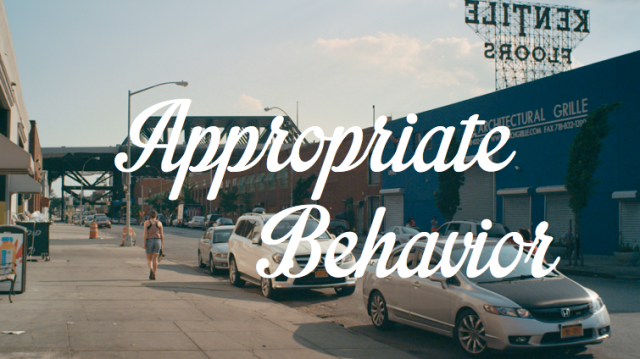 1) Desiree Akhavan wrote, directed, and stars (with deadpan aplomb) in Appropriate Behavior (US/UK), a tremendously personal story about growing up as a bisexual woman in a Persian family in New York.

2) David Wnendt’s Wetlands (Germany) knocks the ball out of the park, adapting German author Charlotte Roche’s 2008 raunchfest. Lead actress Carla Juri immerses herself in the role of Helen as deeply as the character sticks her fingers into every orifice of her body. While perhaps attempting to attack too many issues from the original text, the film lives up to its scandalous reputation; it sent many audience members into fits of confusion for its graphic sexuality and obsessive behavior in regards to bodily fluids.

3) Gillian Robespierre’s Obvious Child (US) gave comedian Jenny Slate more than enough material to chomp on when she’s dumped, fired, and impregnated all in time for Valentine’s Day. This classic indie ditty knows what it wants and grabs it with both hands. Buy advance tix when this comes your way: it’s clearly this year’s Juno (2007), but, you know, without the backlash.

4) Gregg Araki’s White Bird in a Blizzard (US) stars Shailene Woodley — of The Spectacular Now (2013) and The Descendants (2011), and about to break huge in Divergent. Writer-director Araki (an indie legend for films like 1995’s The Doom Generation) returns to the contemplative maturity he explored in Mysterious Skin (2004). This time, he takes on a young woman dealing with the disappearance of her mother.

The melancholy soundtrack by Harold Budd and Robin Guthrie gives the film a Twin Peaks ambiance (never a bad thing), plus there’s the added bonus of Gabourey Sidibe as the main character’s hilarious BFF. Araki hasn’t lost his unique clunkiness that keeps him at the level of festival favorite, but White Bird may be his breakthrough (again) at last. You could do a lot worse than this.

Next week: a look at Sundance’s Native Forum, and reports from the 2014 Slamdance Film Festival!