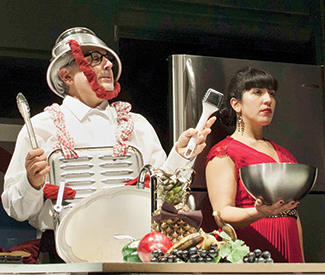 THEATER Alfred Jarry’s Ubu Roi is probably better known for its riotous Parisian opening (back in 1896) than for the play itself. The profanity it leveled against the city’s crème de la crème, beginning with its famous opening incantation, “Merdre!” — not exactly a word but dirty-sounding enough to precipitate a violent revolt long before the final curtain — broke open the doors of the WC on so-called polite society. As it turned out, no one was really keen or able to close them again.

Jarry, a papa of Dada, died desperately poor and unknown a decade later, but his work and life remained an inspiration and touchstone to the avant-garde. Indeed, his best known work, Ubu Roi, is an absurdist play avant la lettre, as the French say, anticipating the luminous assaults on convention by Beckett, Ionesco, Dürrenmatt, Albee, Havel, and others. Ultimately, it is surely Ubu‘s willful nonsense — a refusal to accept the strictures not just of traditional drama, or the mores of the time, but of the very sense of reality propagated and regimented by the dominant society — that made the play (and Jarry) so deeply offensive to most, and so deeply exciting to some.

Still, it isn’t clear what the merits of a play like Ubu might be for a contemporary audience, culturally steeped in merdre of all kinds and pretty blasé about it. The Cutting Ball Theater’s current production, based on a new translation by artistic director Rob Melrose, offers some tantalizing suggestions in its detailed take on Jarry’s comical excesses. Helmed by Moscow-born, Baltimore-based director Yury Urnov, the dream world of the play comes slyly refracted through a decidedly contemporary San Francisco lens, in the form of a sleekly stylish modern-day kitchen (designed by Cutting Ball associate Michael Locher), in and from which all the action arises.

Arranged in the semi-round, with the audience on three sides, the kitchen setting makes an immediate sense as the center of the gluttonous bourgeois world, and not least because the playful dialogue, alternately grand and obtuse, suggests it already with its saucy mixing of food and fecal language. Urnov and cast have great fun in exploring the place, manipulating the mobile islands and cabinets, searching out its nooks and corners, and reveling in the foodie possibilities it presents (to the occasional light splattering of those audience members seated nearest).

Played with a robust appetite, devil-may-care insouciance, and artful humor by Cutting Ball’s David Sinaiko, the titular Father Ubu is a scatological rogue, a loving husband, a pitiless plotter, and naturally enough an esteemed state official: high-ranking officer and right hand to Polish King Wenceslas (a duly puffed up William Boynton). In the role of Lady Macbeth to her too contented, weak-livered husband, Mother Ubu (played with a persuasive mix of impetuous greed and voluptuous innocence by Ponder Goddard) convinces him to set his sights a little higher than the refrigerator. Ubu soon obliges, drawing a small band of conspirators (ensemble members Boynton, Nathaniel Justiniano, Marilet Martinez, and Andrew P. Quick) into his gamesmanship — with help from Mother Ubu, who anoints each co-conspirator solemnly with a dash of water from the tip of a toilet brush.

The coup succeeds initially but things soon go awry, as the deposed Queen (a scrappy Martinez) and her intrepid son, the heretofore sulky Bougrelas (a bounding, amusingly campy Justiniano), fight back.

While the kitchen theme develops rather organically (if also in unexpected ways) from the text, it also stands as a kind of stylistic conceit — a small but deliberate dose of realism in a fantastical comedy of outrageous, yet also domestic, proportions. Its surfaces may shine with the absurdity of a geopolitical food fight, but the motivations and details of the plot are very much in sync with an everyday ruthlessness and regret.

Meanwhile, the plot itself fractures by the second half of the play, as things get truly surreal, abandoning all pretense to linear storytelling. This tonal and aesthetic shift comes nicely registered in the flexible playing style, as Father and Mother Ubu discover they have inherited a realm after all — one they would have thought unreal only a short time before. *