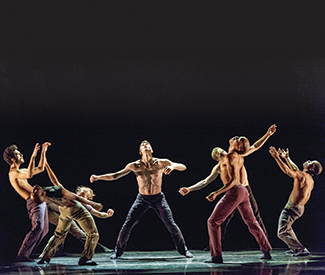 DANCE Though I missed the beginning of Aszure Barton’s gently appealing Awáa — I have trouble with 7:30pm curtains — it was easy to be drawn into her fluidly changing world, in which invisible currents propelled dancers to either give into or work against them. It’s an intimate work, rich with evocative details, fabulously danced by six men and Lara Barclay. Much appreciated were Barton’s touches of humor, but after a time I longed for a stronger underpinning for all this danced lushness.

In Awáa, water is an element that gives life to the planet — but also, in the form of the female of the species, births its inhabitants. You see primitive creatures slithering at the bottom of the sea, and a minute later a human face stares at you from inside a “womb.” Most ingeniously Barton shows water as a force that affects and shapes the body much the way wind alters vegetation.

Burke Brown’s ingenious lighting and stage design place the dancers in semidarkness, where visibility often is poor yet periodically penetrated by a beam of light. In a gorgeous sunlit solo, William Briscoe has rivulets of movement run through his impressively sculptured torso until he reaches for what could be a tear, plays with it, and gently lets it go.

Awáa also seemed to explore self-definition within an unstable environment. Some of the most intriguing dancing took place close to the floor. Something pulled dancers to the bottom where they let go of each other and appeared to melt back into the earth. Upright, they tried to find balance, were yanked sideways, or sucked into deep pliés. Their knees gave out, and they scooted on their bottoms like babies not yet able to walk. The finely boned Thomas House tried to dive upward; others buoyantly walked on the tips of their toes like would-be ballerinas in a pool.

Unisons provided a sense of stability. A body-slapping Africanist trio swelled and waned. A circle of stretching arms suggested prayer until gravity pulled the torsos backward.

In perhaps Awáa‘s most intricate segment, a separation duet, Barclay and Tobin Del Cuore crawled over each other, desperately trying to stay together. As the eternal mother she had a lot of hugging, carrying, and embracing to do. But Barton’s lightened the concept with a hilarious centipede’s procession of progressively advanced pregnancies. In a tit-for-tat comedy act Barclay asserted herself over two obstreperous “toddlers,” who scooted on their toes like windup toys. Grown up, they grabbed, threw, and dragged her to their hearts content.

CHOOSE YOUR OWN ADVENTURE

At the Garage, fertile ground for much new dance, Hilary Palanza showed Close, a fascinating, well-performed collection of six multiple-choice choreographies. Included were duets, a solo, and two quartets. Before intermission, the pieces — some of them quite short but very different from each other — were performed in silence. After each one, the audience chose what kind of version of this work they would like to see again.

Watching a dance, you always wonder about what you are seeing. What’s happening? Where is this going? How do these people relate to each other? These questions become particularly acute when no helpful clues such as costumes, set, music, lighting are provided.

In this program, intermission was tallying time after which the “winners” returned. What we saw was exactly the same choreography performed to music, indirectly chosen by the audience. Music has this wonderful ability to stand on its own against (or if you like, in conjunction with) dance. The simple idea of adding sound to movement illuminated what we had seen before in sometimes quite unexpected ways.

In two duets, its partners revolving back-to-back, one of the dancers got ceremoniously stripped of layers of clothing while the other tried to put them back on. It could have been foreplay, an act of aggression, or mechanical dolls gone awry. The exuberant marching band score with its regular beat turned the whole thing into a comedy act.

In her solo, a black-clad Angela Mazziotta looked like a widow in mourning who finally had to step away. The sound score of a rainstorm didn’t counteract the dancer’s inner turmoil, but added a potent metaphor that enhanced the choreography.

Not everything worked as well. Two different kinds of athleticisms by Eric Garcia and Colin Epstein elicited a fairly predictable stadium crowd’s cheering. But what if the audience’s choice instead of “athletic” had been “religious, intense” or “outer space, heady?”

Perhaps the most illuminating was a mysterious duet between the eclectically trained Garcia and the ballet-modern dancer Nina Saraceno. She would walk away from him but yet pursue him. What was going on? Johnny Cash’s “Hurt” had one answer. Instead of “honest” we could have chosen “airy, ethereal.” Also performing were Caitlin Hafer and Barb Lankamp. Close will be part of Summer Performance Festival 7, July 16-20 at ODC Theater — perhaps looking and sounding quite differently. *