Home Sundance, part seven: What is a BABADOOK? 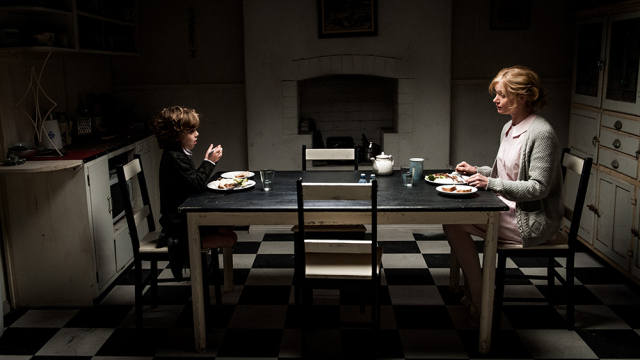 A quick tip for today’s entry: make sure not to miss Jennifer Kent’s hair-raising, toe-squinching, and all-around terrifying Australian horror film, The Babadook.

The first screening for the midnight crowd at Park City’s Egyptian Theatre had people shrieking and gasping throughout. Kent’s psychological terror film is steeped in silent-era imagery; she was clearly inspired by films like F.W. Murnau’s Nosferatu (1922) and Tod Browning’s lost masterpiece London After Midnight (1927).

Star Essie Davis’ performance is downright hypnotic. She plays a single mom doing what she can to protect her little boy — no thanks to the film’s sound design, which offers a masterful blend that ranges from nuanced manipulation to bone-shattering shocks. (I’m betting that upon multiple viewings, the soundtrack will prove even more disturbing due to Kent’s methodical madness.)

What’s all the more exciting about this low-budget creepfest is Kent’s insistence on using stop-motion special effects instead of CGI. In a post-film Q&A, she mentioned 1920s German animator Lotte Reiniger, whose pioneering “cutout” animated film The Adventures of Prince Achmed (1926) is the oldest surviving animated feature in the world. (Walt Disney’s Snow White and the Seven Dwarfs didn’t come out until 1937.)

The results are immensely refreshing and quite thought-provoking — in fact, I got into a few lively discussions (ok, arguments) with some other critics who were confused by some of the film’s philosophical choices. I think that’s exactly how IFC Midnight Distribution is hoping audiences will react, since they picked up the US theatrical rights halfway through the festival. Boo yeah!