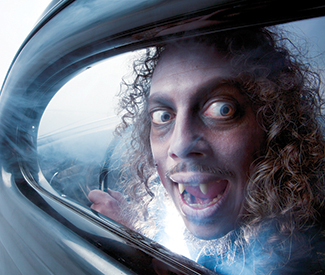 CULTURE Like a mad scientist who has decided to open up his secret laboratory and show off his work to select guests, Metallica guitarist Kirk Hammett hosts “Fear FestEvil,” a convention bringing together the worlds of horror and heavy metal. Hammett has long been a horror film aficionado, and has amassed an extensive movie memorabilia collection of original props, costumes, posters, toys, and more over the years — an obsession that dates back to his childhood growing up in San Francisco.

“I first got into horror movies as a young kid — I think I was five years old when I saw my first horror movie, The Day of the Triffids, and totally loved it,” remembers Hammett. “I used to go to San Francisco Comic Book Company, which was one of the very first comic book stores in the country, at 23rd and Mission, and that was my repository for buying comic books and magazines. I just got into it and never got out of it.”

The idea for the festival — er, festevil — grew out of Hammett’s desire to share his extensive horror-movie collection with fans; it’s the same urge that first inspired his 2012 book, Too Much Horror Business, stuffed with color photos of his creepy cache. Following the success of that tome, he set up “Kirk’s Crypt,” an exhibit at Metallica’s Orion festival in 2012 and 2013 where fans could catch a glimpse of his collection in person. The next logical step, as Hammett saw it, was to create a mini-convention in his hometown.

“It was so fun, and such a big hit at the festival, I thought, why can’t I keep on doing this, but do it here in the Bay Area, and make it bigger and better, with more stuff, more guests, and with some bands that would fit in music-wise,” says Hammett.

“It’s my way of taking my collection and sharing it and turning it into a more giving process, because for years and years I collected — and collectors to a certain extent are selfish, you know, they collect things for themselves. After a while, I got tired of that feeling, so I decided that I would share it with like-minded people.”

Scheduled guests include several luminaries in the horror and sci-fi genres, such as makeup and special effects innovator Tom Savini, Night of the Living Dead (1968) co-writer John A. Russo, and A Nightmare on Elm Street series star Heather Langenkamp. There will also be some actors whose faces might not be familiar to the public, but are fan-beloved for portraying iconic movie monsters: Kane Hodder, who slaughtered countless camp counselors as Jason Voorhees in four of the Friday The 13th films, and Haruo Nakajima, aka the man who donned Godzilla’s iconic rubber suit in 12 movies, including the original 1954 classic.

“I’ve known Tom Savini for a while now, but for the most part, I don’t really know these people, and for me to be able to have them appear at the festival, and for me to get to meet them, is fantastic. That’s another reason this festival is happening — so I can meet these people for myself! It means as much to me as it does to the person who buys a ticket and comes to the convention.”

The descendents of three of horror’s high royalty — Bela Lugosi, Boris Karloff, and Lon Chaney — will also be in the (haunted) house. “It’s incredible that I have a relationship with the Karloff, Lugosi, and Chaney families,” Hammett enthuses. “It’s a really, really big thrill.”

Adding a dimension to the event that hasn’t been widely seen before in the world of conventions, Hammett wanted to add metal music to the horror genre mix. “To me, it’s such an obvious thing. One of the reasons I embraced heavy metal was because of the imagery, and because the feelings I felt when I listened to heavy metal were very similar to those when I was watching horror movies.”

In addition to bands performing on Friday and Saturday nights — including Carcass, Exodus, and Death Angel — the fest also features music-minded guests who have ventured into horror-film production, such as Scott Ian and Slash, and those who have had a long history of using horror imagery in their artwork and lyrics, like guitar player Doyle of the Misfits. Hammett hero Count Dracula, noted fan of music made by “children of the night,” would surely approve. *