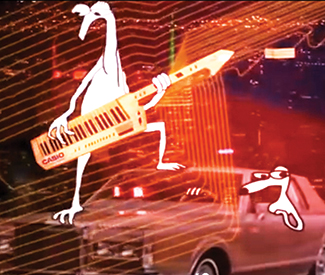 SUPER EGO It kills me that San Francisco currently has four — four! — regular parties called Throwback Thursday. Throw them all back, I say, and give us a little effort! Still, there’s no denying the power of the past — not just because Michael J. Fox is usually starring somewhere in it, but because the past breeds classics. And when it comes to classics, I have lately been drinking my way right through them.

You couldn’t get more classic than the Gold Dust Lounge (165 Jefferson, SF. www.golddustsf.com), opened in 1933. It was the recent subject of a huge uproar when it was booted out of its original Union Square location in order to make way for … an Express store. The venerable watering hole found a new home last year on Fisherman’s Wharf, all its dizzying gold-rush decor intact, and I’m happy to report there’s still some gold in them thar drinks. While the tourist quotient has upped significantly, the rough-and-tumble charm still shines through. Grab a couple daytime Irish coffees and hit the Musee Mechanique for some tipsy whack-a-mole.

On the other side of the aged scale, but still firing classic vibes, is the newly reopened Royale (800 Post, SF.), whose soft launch I ambled into after getting off the cable car I took from the Gold Dust — serious Mad Men moments going on. The space is thrillingly bare bones — just wooden tables, candles, a wall of liquor, and an African mahogany wood top. Oh, and cute scruffy bartender. Perfect, with hopefully some music soon. Official grand reopening party is Feb. 1 at 8pm. Nob Hill is coming back y’all.

I did not put in the asterisk! But even for those who’ve foresworn cusswords, this party will rock. “A night of chocolate, bacon, booze, loud music, sultry performances, and giveaways” is promised, with decadent DJs Richie Panic, J-Boogie, Kimmy Le Funk, and Omar. Plus Dark Garden corset show, the Bacon Bacon truck, and tons more tempty temptations, no asterisks interpolated.

Oh hell yes. We need a lot more rain: so this is a perfect time for this Bay Area funky house and trap and trance tradition. The Raindance crew is celebrating Chinese New Year with all night dancing and four stages of music from Mark Farina, Hucci, Dunkelbunt, and tons more. A fantastic midnight parade of lion dancers and drummers will usher in the Year of the Horse, clop clop.

Time once again for this insanely fun Balkan-themed stomp and whirl, where you’ll hear more time-signatures in one night (mostly all at once) than you’ll hear all year. DJ Zeljko leads the mad charge, with the Inspector Gadje brass band and Jill Parker and her Foxglove Sweethearts bellydancers in tow. Arrive early for this seventh anniversary celebration, and don’t forget to order some rakija (Balkan plum brandy, hella strong) from the bar.

The Pink Mammoth crew celebrates 10 years of burner-flavored partying with another huge takeover of Mighty. Seriously, these parties are cute — and special guests Galen of Sunset and intelligent techno duo Bells and Whistles will take things to another level. Silent Disco outside and, of course, fire poi twirling.

Classic discoterian DJ Bus Station John beams down from the funky planet Whoopiter to play SF’s favorite monthly tribute to the Studio 54 days of yore. Throw on something shiny, tease out your hair, and take the floor. With DJs Andy Trice, Steve Fabus, and Sergio.

That smooth, sensual, cosmic synthfunk vibe oozes from this local producer-skater’s new five-song EP on the Voltaire label. “The instruments used span three decades: from the ’80s the Oberheim DX, Akai Ax60, Yamaha TX81z; from the ’90s a Roland JX-305; and onto present day software” says the release. It will all seduce you. With Beat Broker, Hotthobo, YR Skull, and epicsauce DJs at the Push the Feeling party.

And lo, after six years, many crowds, and a Best of the Bay award, SF’s beloved ’90s night is biting the big one. When it started, the thought of a ’90s retro night was so unique! Now look at us: riddled with Boyz II Men and Hole tributes. I don’t mind it. As for Debaser, DJs Jamie Jams and Emdee will be focusing on their Last Nite party, which is a tribute to the 2000s (www.facebook.com/lastnite00s). Now I will miss the ’90s twice over!