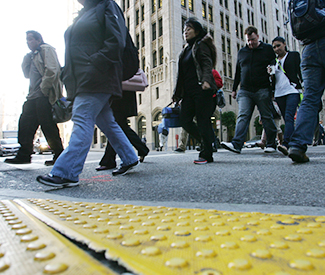 On New Year’s Eve, six-year-old Sofia Liu was struck and killed when a driver using the Uber rideshare app allegedly failed to yield to her and her family as they progressed through a crosswalk. The girl’s mother and brother survived, but their tear-stained faces were soon all over news networks in heartbreaking reports of their loss. No less sad, 86-year-old Zhen Guang Ng was struck and killed that same night by a driver who allegedly failed to stop at a stop sign in the Crocker-Amazon district. These incidents aren’t isolated.

In 2012, 16 pedestrians were killed in vehicle collisions in San Francisco. That number jumped to 21 in 2013, according to the SFPD, and the new year has brought new collisions and more pedestrian deaths.

Already, the SFPD and other city agencies are scrambling for political cover, and advocacy groups are rushing in to call for changes they say will save lives. On Jan. 16, myriad groups will try to sell their version of safer city streets at a joint meeting between the Board of Supervisors’ Neighborhood Services & Safety Committee and the city’s Police Commission.

As the debate continues to unfold, the road to pedestrian safety looks to be bumpy, and the first pitfall may be the Police Department itself.

At the Jan. 8 Police Commission hearing, the SFPD played defense.

A host of groups were calling out the cops: Cabbies wanted more enforcement against rideshare drivers, the San Francisco Bicycle Coalition wanted more incident tracking. Nobody seemed happy with the current state of affairs around pedestrian safety.

Cmdr. Mikail Ali, tall and broad shouldered, approached the podium to give what amounted to the SFPD’s rebuttal. His presentation boiled down to this: Fewer cops equals fewer traffic citations, and fewer citations are dangerous.

“We did see a decrease in traffic citations issued last year,” Ali said. On the screens around the room, he displayed a chart showing two sloping red lines, one representing police staffing levels and another representing total citations. The charts showed a drop of 127 officers, and 20,000 fewer traffic citations, 2012-2013.

But the idea that bringing on more cops is the only effective strategy for pedestrian safety seemed out of sync with a different aspect of Ali’s presentation, in which he conveyed a plan to “Focus on Five.”

Under that plan, police station captains are urged to boost traffic enforcement around the five intersections in their districts that have been identified as most dangerous. Though Ali said the approach was showing progress, the SFPD has yet to release data on how this enforcement approach has played out.

“Right now we don’t have full transparency into their reporting,” said Natalie Burdick of Walk SF, a pedestrian advocacy nonprofit. “We do have data showing they are issuing citations. What we don’t know yet … is has there been an increase in citations from Focus on Five?”

To be fair, it’s a new program, but data is key to many efforts geared toward improving pedestrian safety. The SFPD’s data shows that Focus on Five represents 22 percent of their citations, but it’s still unknown where they occurred and what incidents spurred the citations.

“We’re hearing a lot of incidents go unreported,” said Leah Shahum, executive director of the Bicycle Coalition. Incidents that normally don’t get written up, like an accident that only results in a bruise or a scrape, are just as important to record, she said, because thorough reports can help identify problem intersections. “Without solid, good accounting to show where things are happening, we’re not going to necessarily see change,” she said.

But that would require a cultural shift in the SFPD, Shahum said. For now, the police seem as interested in blaming the pedestrians as they do the drivers.

The first shots fired by the SFPD on pedestrian safety amounted to a public relations gaffe.

“YOU’VE BEEN HIT BY A CAR! … It’s little comfort to know you had the right of way, while you recover from serious injury in the hospital,” reads an SFPD flyer, the message typed next to a picture of a chalk outline on pavement. “Distracted walking is one BIG reason pedestrians get hit by vehicles,” it continues. To emphasize the point, the chalk outline is wearing headphones connected to an iPhone.

Streetsblog San Francisco reporter Aaron Bialick, in his article about the flyers, responded to them thusly: “The SFPD has gone off the deep end with this one, folks.”

His response is understandable. With a choice of two perpetrators, one walking across the street, and another behind the wheel of a two-ton steel killing machine, one would think the latter would be the obvious target. Shahum thinks the problem goes deeper than bad messaging, saying the SFPD’s enforcement is skewed.

“We’ve seen some officers not knowing people’s rights when walking or biking. We’ve seen ‘blame the pedestrians’ from police, in the media,” she said. “We’re hearing things like ‘you should’ve been riding on the sidewalk,’ [showing] a really basic lack of understanding” about regulations cyclists must adhere to.

This issue came to a head when Sgt. Richard Ernst pulled up to a streetside memorial for cyclist Amelie Le Moullac, who died in a fatal collision last August, to lecture those gathered on bicycle safety.

As Guardian Editor Steven T. Jones noted in his article at the time, “apparently Ernst didn’t stop at denouncing Le Moullac for causing her own death, in front of people who are still mourning that death. Shahum said Ernst also blamed the other two bicyclist deaths in SF this year on the cyclists, and on ‘you people’ in the SFBC for not teaching cyclists how to avoid cars.”

Still, Shahum sees potential for change. “This is the area where I think we’re seeing the most promises from them,” she said.

At the Police Commission meeting, Ali noted the challenges police face when assessing traffic collisions. Training officers in the methods to deduce how a collision occurred is no easy task.

“It requires a high degree of science,” Ali said. “Geometry, physics, basic mathematics. Its not just about getting facts from people, but making conclusions from physical evidence.”

Chief Greg Suhr expressed confidence that the new recruits to come out of the academy were abreast of the latest techniques, and commissioners said they may use the need for traffic enforcement as a call to the mayor to help bring more officers into the SFPD’s ranks.

Enforcement and police culture are just some ways pedestrian safety needs to be addressed. Walk SF, the San Francisco Bicycle Coalition and the SFPD all will present their cases at the joint meeting on Thu/16. But as many of them would note, many of these promises have been made before.

“We’re going to re-engineer streets around at least five schools and two areas that have the highest levels of concentration of senior injuries every year,” Mayor Ed Lee said at a press conference, responding to pedestrian deaths that rocked San Francisco.

No, this wasn’t after the New Year’s Eve fatalities. It was last April, when the mayor trumpeted an ambitious program to make the strets of San Francisco safer.

The San Francisco Pedestrian Strategy identifies 44 miles of the city’s most dangerous streets and intersections in need of upgrades. The goal was to improve five miles of city streets a year, with bulb outs (for better pedestrian visibility), raised crosswalks, new crossing signals, new traffic lights, and narrowing lanes.

One of the high priority intersections identified for improvements was Polk and Ellis — where Sofia Liu was killed on New Year’s Eve.

A map of high priority corridors — the most dangerous streets for pedestrians in San Francisco.

That intersection hasn’t yet seen upgrades under the Pedestrian Strategy, Burdick of Walk SF told us.

“Any one or combination of the safety benefits of bulb-outs (or other improvements) could definitely have been the difference between life and death for Sofia,” she said. Walk SF works with city agencies to try to make sure these changes are happening, but she says the city hasn’t been transparent about the effort.

“We know there’s been some progress, but we don’t yet know if we’re doing enough each year to account for getting something done,” she said.

To get a sense of the city’s progress on this front, the Guardian contacted the Planning Department, which referred us to the Municipal Transportation Agency. The MTA did not respond before press time.

“That’s another thing at the hearing with the board (and Police Commission) we’ll be pushing,” Burdick said. “For engineering enforcement work to happen, it’s got to be paid for.”

According to public records outlining the city’s Pedestrian Strategy, the plan needs $65 million a year to hit proposed targets. The lion’s share, more than half, would go toward infrastructure improvements.

Burdick called that amount into question, saying the city had only allocated $17 million. A Pedestrian Strategy report confirmed that the program faces a $5-18 million a year funding gap.

Enforcement, a culture of victim blaming and inadequate funding all pose major challenges to pedestrian safety in San Francisco. Hopefully the joint Board of Supervisors and Police Commission meeting will finally result in some answers.

The joint Board of Supervisors’ Neighborhood Services & Safety Committee and Police Commission meeting will be held Thursday, Jan. 16, at 5pm, Room 250.