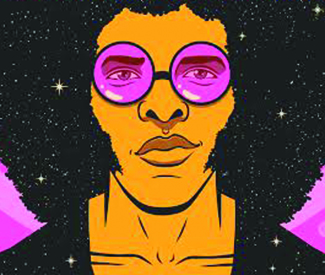 LEFT OF THE DIAL Looking back with the sense of perspective that four and a half decades can provide, the year 1969 seems almost implausibly momentous. The US government instated the draft for Vietnam. Neil Armstrong walked on the moon. John and Yoko got in bed and stayed there; Jimi shred the Star-Spangled Banner. And the Mets were really, really good.

In San Francisco, Sly and the Family Stone went into the studio — Pacific High Recording, on a tiny street near the 101 between Market and Mission, to be specific—and emerged with a record that would change the course of funk and soul music forever. Stand! was the fourth album from the Vallejo-bred seven-piece, catapulting into the mainstream a band the likes of which popular music had never seen: Two white folks and five black folks, both men and women, who sang about racism, poverty, peace and violence, sex, and other provocative topics in an honest yet irresistably danceable way. At the wheel was Sly Stone (born Sylvester Stewart), a charismatic sometime-soul DJ for SF radio stations and a musical prodigy of sorts who played the keyboard, guitar, bass and drums by age 11.

The record sold more than 3 million copies, propelled by singles like the title track, “Everyday People,” and “I Want to Take You Higher.” It was the apex of the band’s success. Three months later, they would give one of the best performances of their career at Woodstock, at 3:30am on a Sunday. By the end of 1969, after a move to LA, Sly and other Family Stone members were addicted to cocaine; by 1970, tensions were brewing in the studio and on the road. Despite producing a handful of other critically acclaimed records, drug problems and personal rifts grew steadily, and the band dissolved in 1975.

Still: “There are two types of black music,” wrote Joel Selvin in Sly and the Family Stone: An Oral History. “Black music before Sly Stone, and black music after Sly Stone.”

Of the 100-plus Bay Area musicians participating in “UnderCover Presents: Sly and the Family Stone’s Stand!” Jan. 17-19, it’s safe to say most came of age in the latter era — regardless of ethnicity — with popular music that bore Stone’s influence. For three consecutive nights at the Independent, nine artists from diverse genres will recreate the iconic album from start to finish, with each band performing its own unique arrangement of the track they were assigned. A record of all the performances was produced at San Francisco’s Faultline Studios in the weeks leading up to the show.

UnderCover has been producing large-scale shows like this every few months for the a little over three years, each time honoring an influential album with a different bill of Bay Area bands and a different guest musical director: Past shows have included reinterpretations of Joni Mitchell’s Blue, Nick Drake’s Pink Moon, and Radiohead’s Kid A. But Stand! represents new ground for a couple reasons: From a technical standpoint, the sheer quantity of musicians participating is daunting, thanks to guest director David Möschler’s 50-person Awesöme Orchestra, a Berkeley-based collective that holds monthly orchestral rehearsals that are free and open to anyone who wants to play.

Perhaps more importantly, this will be the first show honoring a local musician — one whose legacy still commands so much local respect. Recruiting bands who were excited about the chance to honor Sly and the Family Stone, says Möschler, was the easy part.

“If you’re talking innovation, if you’re talking community, if you’re talking Bay Area, that’s Sly,” says Möschler, a Berkeley-based musical director and conductor who comes from the world of orchestra and musical theater. “It was a natural choice.” He pitched Lyz Luke, UnderCover’s director, after being “blown away” by the Joni Mitchell show last January. Möschler said it was time for an Undercover show highlighting an artist of color — and that, while tribute nights to Michael Jackson, Prince and even Stevie Wonder are in no short supply, Sly’s oeuvre seemed to be under-trodden territory.

Why Stand!? “Every song is so powerful and yet so economical. There are these huge political statements — ‘Don’t Call Me Nigger, Whitey,’ ‘Everyday People,’ ‘You Can Make It If You Try’ — but it’s also just extremely good songwriting. And then there’s this 13-minute jam with ‘Sex Machine,'” says Möschler with a laugh. “You can hear that they were at the height of their creative powers as a band.”

Möschler reached out to Bay Area artists that felt like family bands, as Sly’s was. Seemingly impossibly, every artist, from the acclaimed jazz composer/bassist Marcus Shelby to the hip-hop/funk/Latin 10-piece Bayonics, listed a different first choice of song to cover.

“I think we said yes within two minutes,” says Daniel Blum, drummer for the Tumbleweed Wanderers, a folky soul-rock outfit who’ll be performing “Everyday People.” “We were huge fans of the band, but we didn’t want to fall into just covering the song. We played with harmonies, added some signatures of our sound.” Aside from the thrill of reinterpreting Stone’s music, UnderCover presented a rare opportunity to work with a slew of other artists the band respected, said Blum.

“Every show we do, we have artists tell us that they made connections they might never have otherwise, saying ‘You have to keep doing this,'” says Luke. She had the idea for UnderCover late one night three years ago, over drinks at the Latin American Club with Jazz Mafia founder Adam Theis and Classical Revolution’s Charith Premawardhana, then stayed up until morning crafting a dream-team lineup. “Our very first show [a Velvet Underground and Nico night in which Liz Phair and Third Eye Blind’s Stephan Jenkins took part], there were musicians running out from backstage just to see the next band, exchanging numbers afterward — they were in awe of each other.”

Theis has since watched the shows evolve as both an organizer and a musician. Though it hasn’t been the case with this show, “More than one previous UnderCover artist has told me that they actually didn’t really dig the song they ended up with at first, but that it brought them to a place where they had to dig and search for what the song meant to them,” says Theis, whose ensemble will be performing “You Can Make It If You Try.” “For me, that’s brought me to new musical places that I never would have gotten to just by staying in my comfort zone.”

Speaking of comfort zones: Nothing’s official, but this may be the first UnderCover show featuring members of the band being honored. Sly Stone famously fell on hard times in the early ’80s, suffering from addiction, financial problems and alleged mental illness; the musician, who is believed to live in Vallejo again, has made public appearances only sporadically since. But at least a few other original members have happily said they’ll be there. And Sly definitely knows about the show, thanks to Jeff Kaliss, a former Chronicle entertainment reporter who in 2008 penned the only authorized biography of the band, including the first in-depth interview with the elusive musician in over two decades. The verdict: Sly supposedly thinks it sounds “very cool.”

“The number of people from Sly’s community who have reached out has been truly amazing,” says Luke. “We’re talking major, famous funk guys going ‘We’re on board, we’ll help you. I think the community was waiting for this. I don’t think I realized what he means to the Bay Area.”