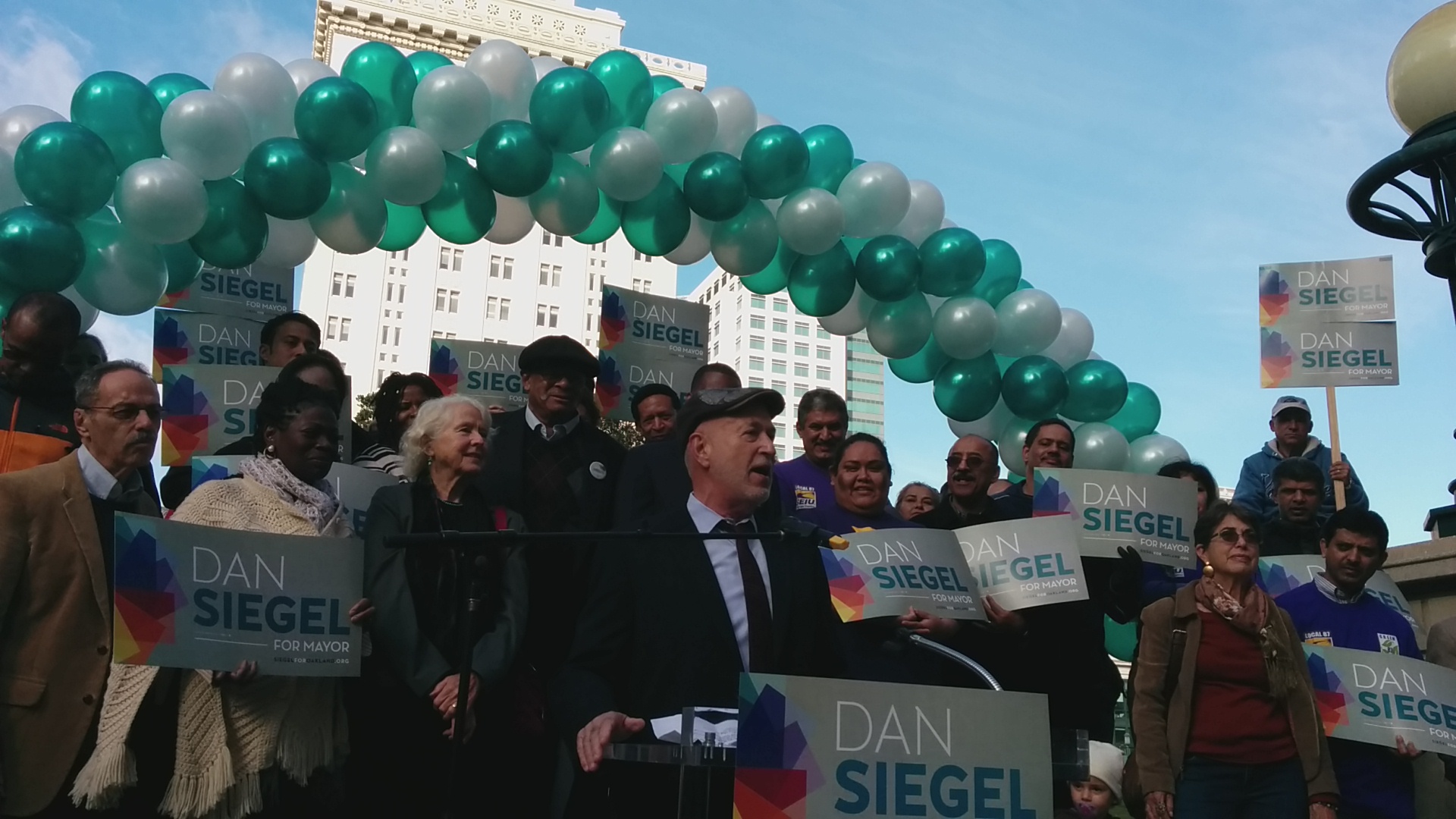 Oakland attorney Dan Siegel, known for a long history of involvement in Bay Area social justice movements, joined a group of more than 150 supporters in front of Oakland City Hall this morning to announce his candidacy for mayor.

In a speech emphasizing his campaign ideals of social and economic justice, Siegel called for shutting down Oakland’s recently approved Domain Awareness Center, raising the city’s minimum wage to $15 an hour, making improvements in public education “to level the playing field between children from affluent backgrounds and children from poor backgrounds,” and shifting the city’s approach to policing by reorganizing the police department to foster deeper community engagement. We caught a few moments from his speech here:

Siegel’s campaign co-chair is Walter Reilly, a prominent attorney affiliated with the National Lawyers Guild who said he has a long history of involvement with civil rights and social justice movements. “This is a continuation of that struggle,” he said, adding that Siegel’s affiliation with “a progressive and class-conscious movement” is sorely needed in Oakland.

Left Coast Communications was tapped as Siegel’s campaign consultant. Siegel’s communications director is Cat Brooks, who was previously an organizer and sometimes spokesperson for Occupy Oakland.

In 2011, when the Occupy Oakland encampment sprung up in front of Oakland City Hall, Siegel resigned as a legal advisor to Mayor Jean Quan over a difference in opinion about her handling of the protest movement. Police crackdowns on Occupy, which resulted in violence and the serious injury of veteran Scott Olsen, made national headlines that year.

Olga Miranda, an organizer with San Francisco janitors union, SEIU Local 87, also spoke on Siegel’s behalf. “San Francisco has become for the rich, and we understand that,” she said. “But at the same time, Oakland isn’t even taking care of its own.” Referencing gentrification, a term that seemed to be everyone’s lips, she added, “Dan understands that if you live in Oakland, you should be able to stay in Oakland.”

Asked why he’d decided to run, Siegel told the Bay Guardian, “I feel that not only in Oakland but across the country, things are really ripe for change. When you have a city like Oakland where so many people are in poverty or on the edge of poverty, or don’t have jobs or face evictions … it’s no wonder that the social contract falls apart. It seems to me that what government should do is elevate the circumstances of all people, and particularly people who are poor and disadvantaged.”